Broncos offensive schemes through the years

Happy Monday Tuesday, friends.  Pro Football Reference is doing something interesting, in trying to identify the offensive and defensive schemes that each team has employed throughout their histories.

I’m a bit of a scheme guy, as most of you know, so I thought I’d try to help them, and also provide an interesting read for our IAOFM readers.  Since I only go back to January of 1987 as a Broncos fan, I can’t help beyond that, but if any of our longtime fans have any ideas, let’s load up the comments, and the PFR guys can possibly benefit from that too.

The first thing I’d like to say is that it’s difficult for anybody to really find the sweet spot in classifying an offensive or defensive scheme.  You can get pretty exact with it, and make the case that one West Coast Offense is dramatically different from another.  The risk there is that you lose the ability to make the assumption that a pool of West Coast Offenses is fairly homogeneous.

Shanahan, of course, ran an offense centered around 100% commitment to zone blocking, the stretch run, and bootlegs off the stretch run, with high and low crossers, and one vertical route to the bootleg side.

Reid always seemed to be more influenced by LaVell Edwards from his time at BYU than he was by Holmgren, and he ran a vertical offense that was pretty far afield from a standard West Coast scheme.

Personally, I wouldn’t call either a West Coast guy.  Shanahan is the father of his own distinct style, and Gary Kubiak adopted it, and in some ways, has improved upon it.

Reid's offense is a hybrid of some West Coast terminology and concepts mixed with the one-back/vertical stuff that Edwards popularized at the collegiate level.  It will be interesting to see if Kansas City is more traditionally West Coast, with a QB in Alex Smith who’s best on the short and intermediate throws.

The challenge of scheme identification from a distance gets even trickier on defense.  The way defenses are described by the media simplifies everything down to the number of defensive linemen with their hand on the ground.  If we let the average media guy tell it, there’s a 4-3 and there’s a 3-4, and that’s about it.  They conflate a personnel grouping with a scheme, and that personnel grouping is only used in about 50% of the snaps anyway.

I find this to be incredibly insufficient, because there’s vastly more going on with a defense than the number of linemen (in base situations) alone can indicate.  There’s a huge difference between Wade Phillips’s version of 3-4 from, say, Dick LeBeau’s.  Phillips has his guys one-gapping, and trying to penetrate.  LeBeau’s front is two-gapping (mostly) and trying to draw double-teams and tie up blockers.

And that’s just what’s happening up front.  I would argue that the much more important distinction is what defenses are doing on the back end.  Do they play primarily man-to-man or zone?

When they’re playing pass defense, are they primarily using a single-high safety (Cover 1 man-free, or Cover 3) or two high safeties (Cover 2, with either zone or man principles in front of it.)

Is there a lot of blitzing beyond the primary four rushers?

Does the defense do a lot of zone blitzing?

The number of down defensive linemen in base situations is barely even relevant to an intelligent discussion of defensive schemes, and somehow, it’s presented as the be-all, end-all.  I don’t blame PFR for that, obviously, because they’re working from the common base of understanding among football watchers.

I’ll put it to you like this – I’m more comfortable lumping West Coast offenses together than I am lumping 4-3 defenses together.

There’s more schematic similarity between what Mike Shanahan and Andy Reid do than there is between what the 2012 Broncos (nominally a 4-3 defense) and the 2012 Giants (also nominally a 4-3 defense) do.  At least with offenses, the standard nomenclature gets to some specificity of tactical approach.  Defensive nomenclature gets absolutely nowhere toward it, with the exception of the widely-used term Tampa 2.

So, having pissed in the punch bowl, and having pointed out the limitations inherent to this exercise, let’s try to help PFR get the Broncos right as far back as the IAOFM reader base can take it.  I’m going to start at the moment I started watching Broncos football, and we can crowd-source the older stuff.

Dan Reeves was a pretty conservative guy, and he liked to run the ball a lot, so I generally agree with PFR’s conclusion that you could call him a Smashmouth coach.

The passing concepts tended to be pretty vertical, which is in keeping with the idea of wanting to run the ball.  (Vertical passing tends to move linebackers and defensive backs off the line of scrimmage, creating more room to run the ball straight ahead.)

It was about running the ball, and setting up play action, and really, Reeves’s style isn’t all that comparable to any of the recognized “offensive families” of today.

Fassel was a true practitioner of West Coast Offense, much more so in the early 90s than later in his career.  The Broncos changed schematically from how they operated under Reeves, and the passing game took on a more horizontal mindset, which was a little bit counterintuitive, given a vertical running back (former TE Rod Bernstine) and a speedster of a vertical WR in Anthony Miller.

The offense had some good moments, sometimes on plays made by great players, and sometimes on matchups created by the scheme.  The two elements never fit together very well, though, and Fassel’s reign was short.  I consider it to be a cautionary tale about the downside of trying to make players fit a preferred scheme.

As I previously mentioned, Shanahan’s offense is original enough to be in its own category.  The running game and short/intermediate passing game are decidedly horizontal in nature, with a goal of making defenders chase the action from side-to-side, and then killing them with misdirection.

The passing game isn’t particularly timing-based, though, and on base downs, it mostly relies upon half-field high-to-medium-to-low reads off of bootleg action.

With the initially horizontal action, Shanahan’s scheme puts a lot of defenders out of position to the wrong side of the field, and then attacks the guys staying at home vertically. 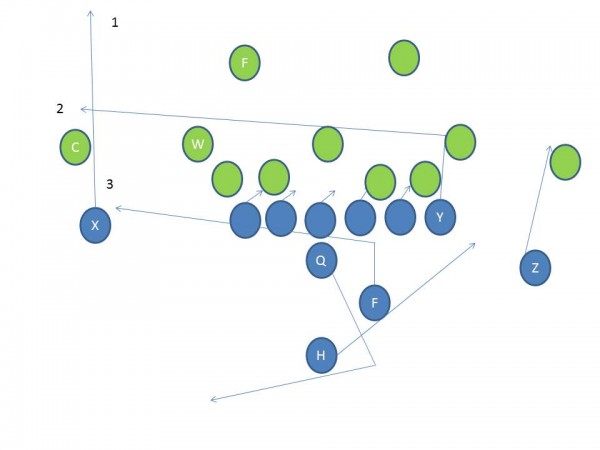 This is the classic Shanahan bootleg play construction, where all of the initial action goes right, but the pass play is coming back to the left.  If the defense was really disciplined, a CB and a safety stayed home, and those two defenders had to decide which of the three receivers in the concept to cover.  If the QB caught the WLB staying home too, he’d know that his stretch play was blocked, and they’d run the ball the next time.

The Shanahan running game was truly innovative, and it was really a key precursor to the zone-read stuff that took hold in colleges, and has now made it into the NFL.  If you do the Shanahan running game out of the shotgun, and add in some option principles, you’re doing what Rich Rodriguez does.  Shanny isn’t a West Coast guy, not really.

I don’t have much quarrel with PFR’s characterization of the Josh McDaniels Broncos offense as being a Spread/Erhardt-Perkins construction.  The term Spread is a loaded one, and it makes people think of a mythically monolithic scheme that doesn’t exist.

In the case of the McDaniels era, what we saw was a desire to have at least three wideouts on the field most of the time, but then a pretty faithful adherence to Erhardt-Perkins schematic principles.

The running game featured a mix of zone and angle blocking, and there was some pain in the transition for a group that had been drafted to play all-zone, all the time.

By the way, I include the Eric Studesville four-game period here, because it’s not like the Broncos scrapped the underlying McDaniels scheme when he was fired midseason.

Mike McCoy had been the offensive coordinator since 2009, and he started the 2011 season basically doing the same things with the same QB (Kyle Orton) as he’d been doing in 2009 and 2010.  When Orton started the season poorly, Tim Tebow entered the picture, and the offense had to be changed dramatically in-season.

The Broncos installed a simple schematic framework that took maximum advantage of the threat of a Tebow run by using a lot of read-option plays.  Willis McGahee benefited from the backside defenders having to stay home, and Tebow himself was able to make some big plays running the ball.  The offense also minimized Tebow’s limitations as a passer.

I don’t think there’s really an NFL family where this offense fits, honestly.  The Broncos did the best they could with the players they had.  The team success that they had, in spite of their offensive limitations, seems to be what put initially McCoy on the map to become a head coach in 2013.  It’s always impressive when a coach can make a scheme fit his players, especially when it’s done on the fly.

People who read this site know that there’s something called the Manning Offense, and that it came to Denver last year.  Chris Brown calls it the Peyton Manning/Tom Moore offense, but that’s a little verbose for me, so I condense the name.

PFR has classified the Colts from 1998-2011, and then the Broncos from 2012 to today as running an Air Coryell scheme.  That’s extremely far from the truth, as I was just explaining to my good friend Jeff Legwold in January.  If you want to know why Air Coryell and the Manning Offense are highly dissimilar, read that article.

The Manning Offense uses a few well-designed route concepts repeatedly, knowing that no defensive call can account for every receiver in the pattern.  The key is that Peyton Manning is able to spot the weakness in the defense quickly, and attack it.  That’s why not every team can run this offense, because every team doesn’t have Peyton Manning.

Levels fundamentally makes defenders play from side-to-side, but when you vary the depths, you mess with them vertically too.

The 2012 running game in Denver stayed virtually the same as it’s been since 2009, when Erhardt-Perkins came to town.  The staple running play in Indianapolis was a stretch run play with zone blocking, which we didn’t see all that much last season.  It will be interesting to see if it starts being featured in 2013.

I tend to think that it will be introduced, because you can really make some big plays with an out-and-in route from the slot receiver on the backside, when you use play-action off that outside stretch.  I could see Wes Welker being on the receiving end of some passes in space off of that action.

I’m going to stop here, at around 2,000 words, and handle defense separately.  Look for that article in the next day or two, schedule permitting.  Also, if any of our readers who are older than me have any ideas to add, let’s see them in the comments.  I’m sure PFR will be happy to have the input when we share this with them.