Happy Monday, friends. As I mentioned amid the kerfluffle on Friday, I have recently come into a bit more free time, and I plan to put out some good analytical content over the next couple weeks.

When Peyton Manning agreed to come to the Broncos, I did a series of articles about the Manning Offense, which I called the simplest in the NFL.

For the most part, that remains true. This year, however, Adam Gase has introduced some creative wrinkles to the offense, and they’ve been used at key times to generate points.

What I propose to do is to break down each touchdown pass thrown by Mr. Manning this year. It will give us a good sampling of the concepts used, and the variations employed on each concept. I’m thinking I’ll go ten at a time, which only gets us into the second game of the year in this part of the series.

This was the first TD of Julius Thomas’s career, and it came one play after an interception by Chris Harris. 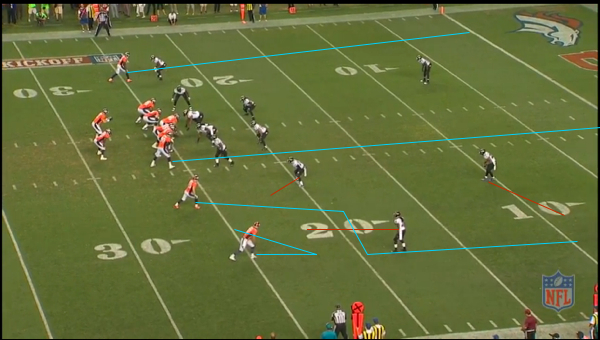 Decker carries out his route, which is a bubble screen. JT and Welker run vertical routes with initially slow releases, like they might be blocking for Decker, then they head upfield. Welker actually bows his route to the outside, and occupies the safety. The linebacker covering JT in man-to-man (Daryl Smith) totally bites on the screen action, and there’s no way that Josh Bynes can get there to stop this easy walk-in TD. At the top of the screen, DT has occupied S James Ihedigbo, so he can’t come over and help in the middle.

The Broncos use the WR screen game often, and it lends itself very well to deep routes off the fake.

This isn’t anything that original, but it’s the kind of play that loosens up the coverage on the screen game. The Broncos should be looking to bust this play in their first playoff game, with the way defenses have been clutching and grabbing on the WR screen.

JT decided that it’s so much fun to score TDs, he’d do it again.

Here, the Broncos come out in 2-by-2 alignment, with JT to the inside of DT, tight to the line. Welker is in the slot at the bottom of the screen, and Decker is the outside WR. 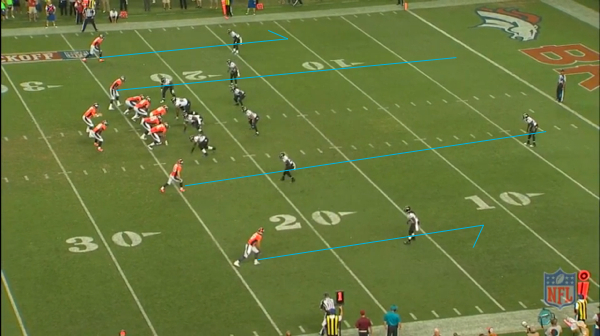 This is 4 Verticals, but with the two outside receivers running hook routes against Cover 1 Man Under. The use of a single high safety isn’t disguised at all, and it’s plain to see that Ihedigbo is favoring the Welker/Decker side.

Manning sees JT run by (current Bronco) Michael Huff to the inside and knows that Ihedigbo can’t get there to cause an incompletion. As it happens, he can’t tackle JT before he runs into the end zone either.

The Broncos show a 2-by-2 alignment, with Caldwell filling in for DT on this play. He gets single coverage from Jimmy Smith, with no safety help, and he’s going to beat it with a clean release on his vertical route. 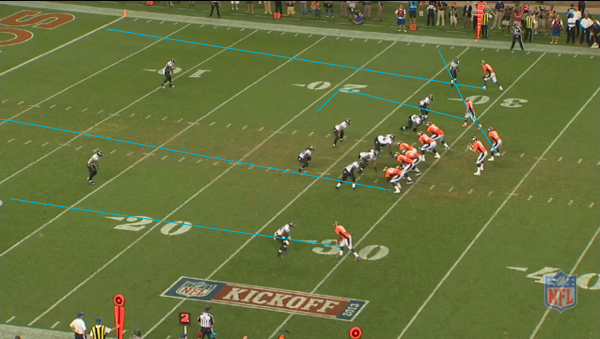 Elsewhere, the Broncos also have two other vertical routes (JT and DT), and two underneath routes (Welker and Knowshon Moreno). JT’s route is the one that keeps Huff in the middle of the field. The pass protection is very good, and Manning makes an easy throw.

The alignment is 2-by-2, with a stacked look with Welker behind and slightly outside DT. The concept in use is one that I’ve seen called a Bench concept, where one receiver (DT) is going to drive hard vertically, and run to the corner, and another receiver is going to follow the same vertical stem, and run a short out route. 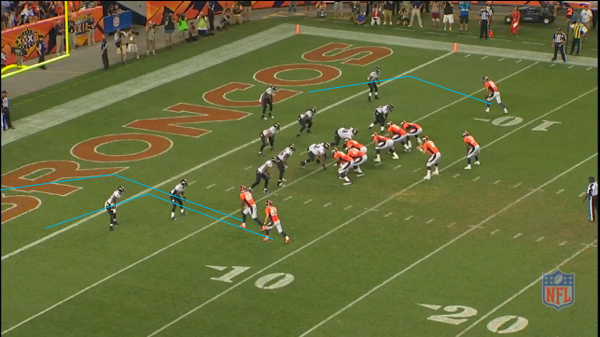 The Ravens are showing man coverage, and Jimmy Smith (the outside guy) is taking DT, and Corey Graham is taking Welker. It’s weird that the outside guy would take the inside guy, and vice versa, but that’s how they play it. Because Graham plays with inside leverage on Welker, Wes easily runs past him.

The Broncos sell out for protection here, and keep both DT and Moreno in.

It doesn't really matter, because the ball comes out very quickly.

Concept: In and out

This is another concept that’s not traditionally part of the Manning Offense, and it almost certainly was put in specifically for Welker. The alignment is 2-by-2, with Decker, JT, Welker, and DT going from the offense’s left to right. 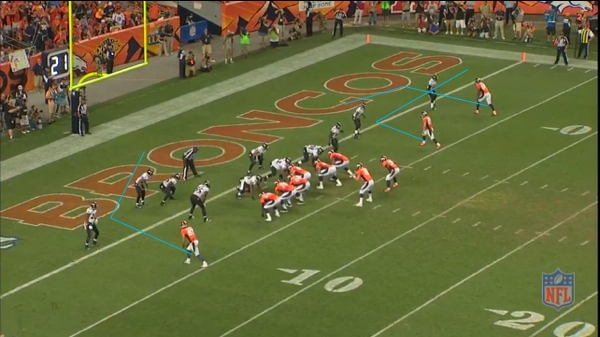 Manning takes a little sprintout to the right, and the rub by DT is excellent. Welker comes obscenely open, and it may be the easiest TD pass Manning ever threw.

Lardarius Webb, the Ravens’ best corner, is on Welker, and he gets caught up in the wash completely.

The Broncos again align in a 2-by-2 look, with Decker, Welker, JT, and DT from left to right. The defense shows press man with two deep safeties. All four Broncos receivers are going to run vertical routes, but DT’s is special, because he makes it a hitch-and-go, and gets his separation on the hitch. 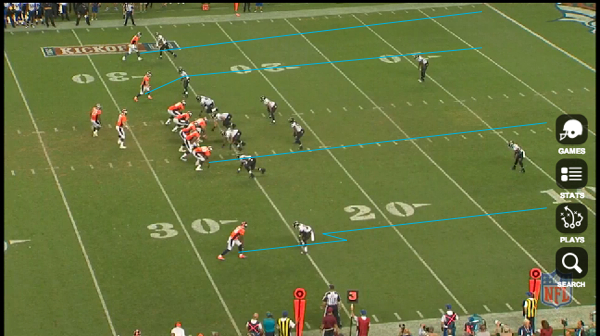 The Ravens bring inside pressure with Daryl Smith and Josh Bynes, but Manning sees the single coverage on DT, and cuts loose a timely, perfect throw. Again, the victim is Corey Graham.

This is the Broncos building offense. Remember how on the first TD of the game, there was a fake of a WR screen? This time, they go with it to DT. The alignment is 2-by-2, with DT, Welker, JT, and Decker from left to right. 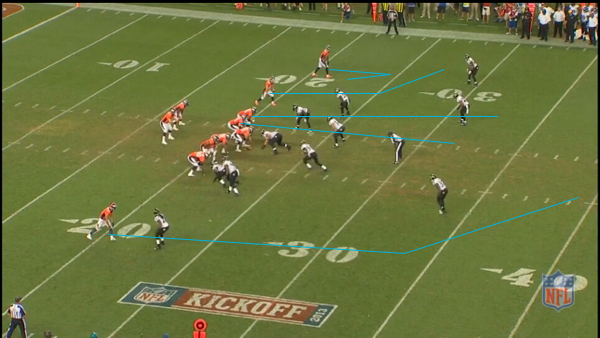 Again the Ravens are bringing inside pressure, and Elvis Dumervil jumps offsides, to boot. (As we know, he does that sometimes.) Jimmy Smith is playing WAY off of DT, so this is going to be an easy pitch and catch.

Manning defeats a free runner coming at his face with a well-timed and well-placed throw. This was his seventh TD pass in the same game, tying an NFL single-game mark, against the defending Super Bowl champions.

I can only loosely call this 3 Verticals, because it is a one-man route. The Broncos show a 2-by-2 alignment, with Decker, Welker, JT, and DT from left to right. 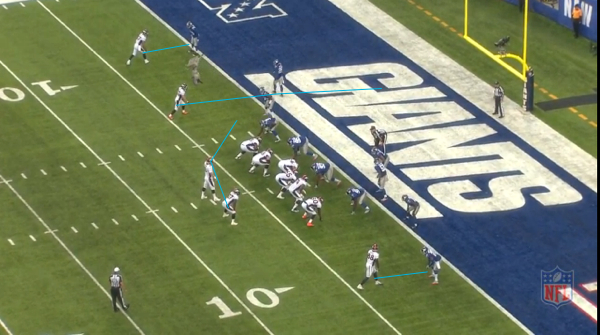 What we have here is a play fake to Moreno, with Decker, JT, and DT run-blocking, and only Welker running a quick vertical route to the end zone. Manning catches Terrell Thomas looking into the backfield, and maybe he suspects that he had run contain responsibility. Welker runs by him, and it’s another easy throw.

The Broncos like to run the Double Post concept pretty frequently, but here, they’re extra serious about it. They start out with a 2-by-2 alignment (DT, Welker, JT, Decker left to right), but Welker motions across the formation and winds up between JT and Decker. 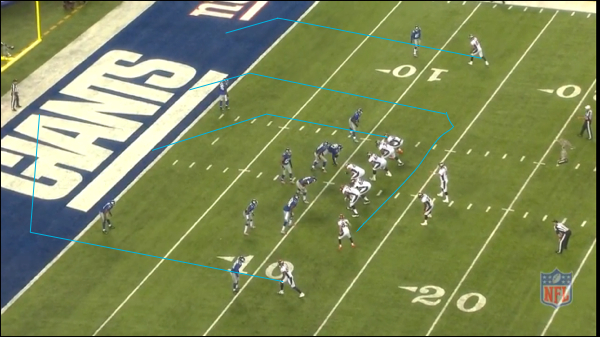 All four receivers run post routes, and Manning goes to JT, who is pretty well covered by Spencer Paysinger, but doesn’t have a safety in the picture to help. Basically, he finds the single coverage, and JT posts up on the LB, like the former basketball guy he is.

This play has similarities to both Touchdowns #4 and #8. The alignment is 2-by-2, with DT, Welker, JT, and Decker from left to right. Decker motions in tight to the line, which over the last couple years has been a tell that the run is coming. This is the first TD pass of the year that hasn’t come from the shotgun. 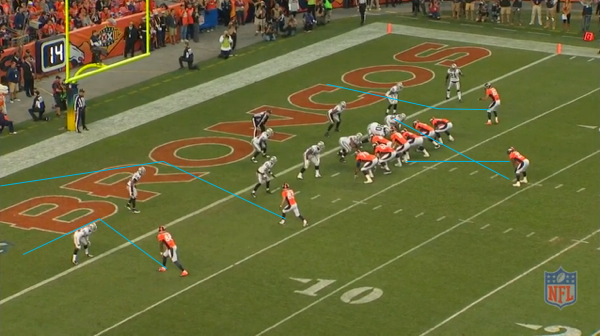 The concept to the bottom of the screen is Bench, as in Touchdown #4. The ball goes to Decker at the top, though, after he fakes a block as part of the play action fake. The defense bites hard on the Moreno run action, and Decker is wide open.

That’s the first ten, friends. I’ll be back within a few days with the next 10.