Happy Friday, friends. Our longtime reader Mike Birtwistle asked me on Twitter to take a look at the Broncos defense, and to try to get some perspective into the conversation. He's noticed a lot of hand-wringing by Broncos fans on Twitter, and his view is that this defense isn't really all that bad.

Before we try to evaluate the Broncos defense, let's try to understand what it means to have a good defense.

In order to do that, let's start with offense. All the time, we hear that the NFL is a passing league. When I Googled that, I got about 37 million results for it. The top result was an article by retired LB Scott Fujita (who is way too intelligent and reasonable to be working at FOX) about how the NFL got to be a passing league. Hit the jump, and we'll look at it.

Fujita notes that the rules, and maybe more importantly, the application of those rules, are rigged in favor of the offense. He admits his bias as a former defender, but he's right. The NFL wanted high scoring games, and they got what they wanted.

I'll go further than most people will. I'll just come right out and say that a proficient passing offense simply can't consistently be stopped in the NFL. There's nothing a defense can do against a great QB and good surrounding players to completely shut it down, because the coverage players can't cover every inch of a receiver's catching radius, particularly within the modern rules of the NFL. The better job the DBs do, the more likely it is that they'll be called for interference.

How many times have you heard a broadcaster say that a great throw beats great coverage? It absolutely does; for a change, the bloviators are correct.

So if you can't stop a great passing game, how do you play well enough on defense to win a mother&*^king game? The answer is counterintuitive, but again, unusually, the long-standing football truism is still correct. The most important thing is, was, and always will be, (world without end, amen) stopping the run with your front seven. If you can contain the run very effectively, you can consistently put the offense into long yardage situations, and make it less likely that their passing game can be successful on a given snap.

Let's look at a couple of league-average passing attacks, and how they do passing the ball on various downs and distances. Using Football Outsiders' DVOA rankings for the 2012 season (for full season purposes), do you know who the 16th and 17th most efficient passing teams were? Houston was 16th, and Cincinnati was 17th; both were playoff teams, and each had a passing game that was average-looking to the eye test. Let's look at the passing success rates of the Texans and Bengals on various downs and distances, in terms of yards per play: 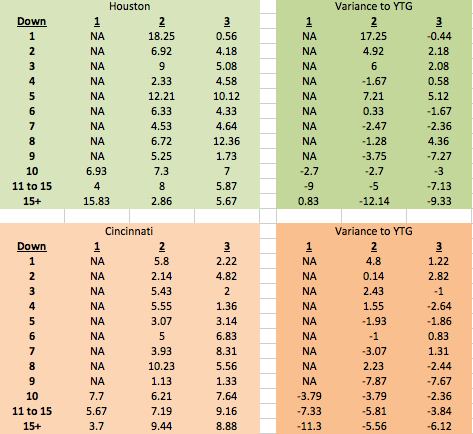 For variance purposes, my assumption for the 11-to-15 yard distance is 13 yards, and my assumption for 15+ is 15. Negative variances indicate that the team, on average, didn't achieve a first down by throwing the ball on the specified down and distance. Notice how, generally, the longer the yards to go, the less likely it is that an offense will pick up a first down? (You have to wonder what the Texans were doing on 3rd and 8, though.)

In general, long yardage situations are more difficult to convert, because of a few factors. First, it takes longer for receivers to get downfield, and that can invite quick blitzes or leave an offense vulnerable to an effective pass rusher. Second, DBs can recover from losing at the line of scrimmage, and get back in position to knock a pass away. Third, the longer the ball is in the air, the more time a close-by defender has to break on the throw; the turnover risk goes way up, the longer the yardage-to-go.

Beyond the structural challenges, on a long yardage play, the defense can do a few things to help itself. For one thing, they can rush the passer, and not worry about playing run technique. As Fujita noted, offensive linemen get away with more holding, and QBs get more roughing calls, but the best way to stop a passing game is still to pressure and/or sack the QB.

Another thing the defense can do is play zone defense at the sticks, and keep everything in front of them, short of the first down. If it's 3rd and 9, you can have fun completing a pass at six yards, if I have two guys to tackle him immediately.

On longer distance plays, jamming a receiver at the line of scrimmage can be helpful, as well. Offenses that rely heavily on precise timing tend to struggle with that kind of tactic.

The over-arching point is that favorable down-and-distance situations are favorable. Duh, right? Football coaches still like to run the ball a little bit more than half the time on 1st and 10. It doesn't matter if they're running to set up the pass or passing to set up the run. What matters is that defending well against the run is a great opportunity for a defense.

No rules have been changed to prevent a defense from manning up, knocking an offensive lineman backward, and putting an offense into a second-and-long or third-and-long situation. Also, as Fujita notes, the efficacy of NFL running games is declining, largely because the limited amount of padded practices prevents offenses from developing proficiency.

When a defense can leave the heaviest lifting of run defense to its front four, its linebackers can read the play and react, and its DBs can play the passing game first, and react last to a run play. That will always be the soundest way to play defense, and it's the way the Broncos have built their group.

The run defense for the Broncos has been terrific this season, and it's about to get better with the return of Von Miller, who is an impact player no matter how a defense uses him. Every defensive lineman the Broncos have is at least above average against the run, even Sylvester Williams, who showed a bit of life in 20 snaps against the Jaguars. Those four guys can generally win against five offensive linemen, and leave the linebackers free to flow to the ball. The Broncos, by any stastical measure, and also by virtue of the eye test, are one of the most effective run defenses in the NFL.

What the Broncos have been lacking is an effective pass rush, but that's all about to change with the return of Miller. You know how I talk about how improving one spot on the offensive line can cause a ripple effect, and improve several positions? The same is true of a pass rush.

To date, the primary weakside pass rusher has been either Shaun Phillips or Robert Ayers. Both guys are good players, but when an offense is most worried about them, and focuses on containing them, they're not the kind of players who are going to beat double teams all the time. The primary outside rusher on the strong side has been Derek Wolfe, and he's done reasonably well at getting pressure, considering edge-rushing isn't really his game, but he only has one sack.

With Miller coming back, Wolfe is back to rushing from next to Miller on the inside, which plays more to his power game and his propensity to stay active on a play. As offenses slide protection schemes to Miller, you can suddenly plug in the emerging Malik Jackson as a 3-technique on the weak side. Then, on the weak side edge, you can put either Phillips or Ayers in a wide alignment (7t or 9t) and be pretty sure you'll get a one-on-one matchup there.

Suddenly, that pass rush is pretty formidable, right? That's not even adding in the work of outstanding blitzers like Wesley Woodyard or Chris Harris. The Broncos are about to start getting to the QB more, and that's the great deodorant in pass defense.

Now, to the topic of coverage, which, remember, is mostly an impossible mission due to the rules and their enforcement. Honestly, within the parameters we've seen, the Broncos haven't been that bad, if you ask me. A specific player has struggled in a specific game agaisnt a specific receiver, but overall, I think that the apoplexy on Twitter is misplaced, vis-a-vis the personnel the Broncos can put out there in coverage.

I do think the Broncos have played too much zone defense the last three games, and that doing so doesn't play to their strengths. With a more fully healthy group of DBs, I'd like to see the Broncos get back to playing Cover-1 Man Under.

I also think that Duke Ihenacho has been slumping lately, and particularly, has been taking some awful angles to the ball. The Broncos need Duke to be the guy from the first part of the season, not the recent model.

Honestly, if it was me, I'd be thinking hard about getting Duke off the field in passing situations, and using Kayvon Webster to cover TEs man-to-man. Kayvon has done a really good job lately, and if he can hang with Dez Bryant man-to-man, he can certainly hang with most TEs.

My other gripe is that in the Jaguars game, it became obvious early that Justin Blackmon was beating everybody off the line of scrimmage. It was equally obvious that Blackmon was the only guy on the whole team who could hurt the Broncos. Blackmon isn't really all that big or all that fast, but I do think he looked like a #1 receiver last week. He's really unique, with his sudden explosiveness, herky-jerky style of release, and general route running.

Anyway, why not double-team that guy on every snap? Are the Broncos allergic to double coverage? I know that it's not generally preferable, but how about some situational football, right?

I think that Von Miller is going to be worth about a touchdown per game saved. The Broncos have been allowing 26.8 points per game this year, through six games. (If you drop the obvious outlier in Dallas, it's 22 points per game.) Even if Miller didn't portend to provide a lot of help, I'd tell the apoplectic set to take a chill pill. After all, the Broncos are scoring 44 points per game, and nothing seems to be an outlier in the offensive portfolio.

On a given Sunday, a good offensive team can get some completions in bunches against the Broncos defense, but the way this team is set up, all that will do is make things somewhat interesting. Even the best teams ever have been susceptible to a Shit Happens game, and there's really no way to remove that risk from the equation, no matter what you do.

Relax, friends. Everything is going to be alright.