A Second Helping of Wesley Woodyard’s sack of Carson Palmer

Fourth quarter, 12:20. Oakland’s trailing 34-6. They’re in 21 personnel, I formation with two WRs on the offensive left, starting from their own 39 at 1st and 10. Denver’s countering with man coverage on the WRs, a balanced-front defensive line, and Von Miller standing up as the RDE. Elvis Dumervil is at LDE, next to Mitch Unrein, and both are backed by LBs, with Champ Bailey behind them - an overload ensues on the defensive left.  It’s a fake, but it draws lots of attention. 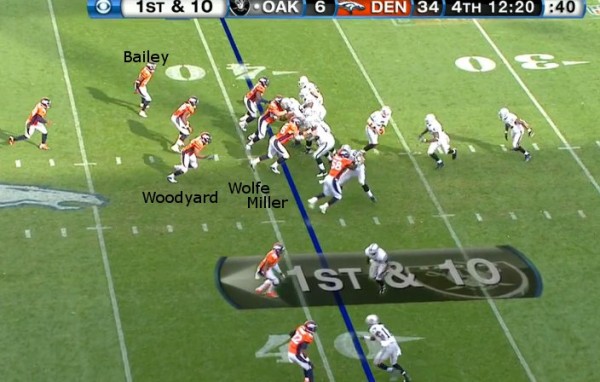 At the snap, LB Wesley Woodyard cuts right and takes a lane up the center. With Derek Wolfe occupying Stephen Wisniewski, Woodyard should have a gap. This is the same play, end-zone angle: 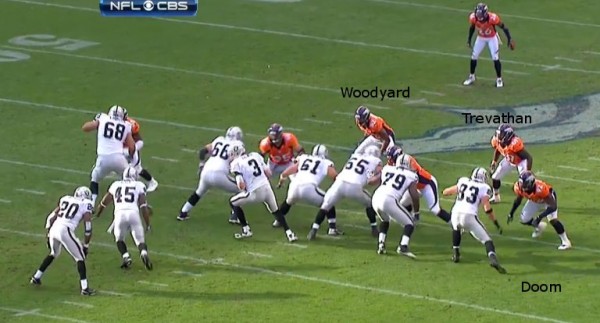 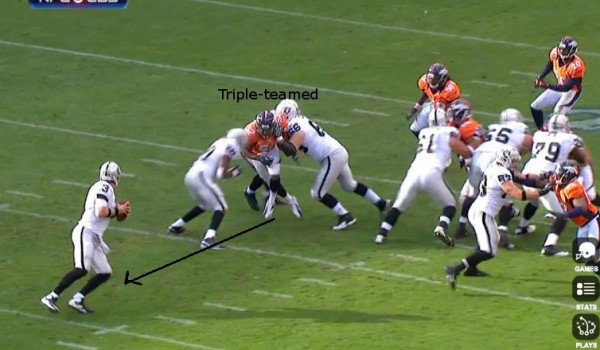 As Woodyard crashes down, McFadden has one arm, Carlisle has a grip on the other at top of the shoulder, and Reece has him from behind. Some days, though, that’s just not enough. This is Raiders/Broncos, guys, not an ice cream social. Get him down or get ready to get hurt. 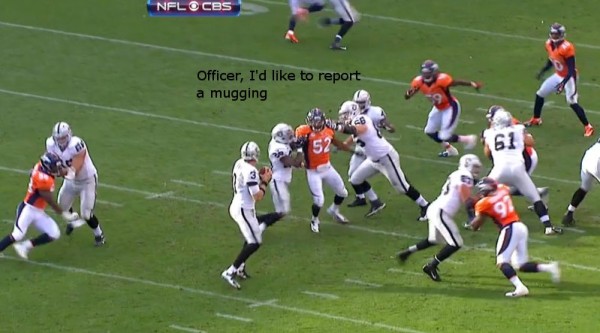 Palmer tries stepping up in the pocket, but that only makes things worse. Doom is attacking from the right, Miller from the back left. Palmer can’t step back and into Miller, and the right is out, so he trusts his linemen and steps up - right into Woodyard, with the others just behind, if from different angles.

The finale is predictable. Jack Del Rio has outdone himself on scheme all day, and this is no different. The players have taken his work to its highest on execution after the first quarter, and kept the Raiders to two field goals in the first half. Kudos to all. 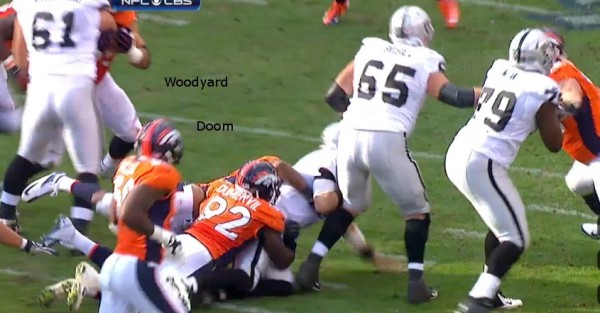 There’s something simply satisfying about crushing your enemies, seeing them flee before you, and hearing the lamentations of...oh, that’s actually the crowd, and they’re not lamenting anything. The Raiders fans were too shell-shocked to even complain much. Oh, well - you still get the idea.

The WW sack was a good example, if writ small, of what happened all day: beating your man, winning the individual battles, and trusting the coaches that put you in positions to win, play after play. Congratulations to every phase of the Broncos on Sunday - except you, Britton Colquitt. Drawing a check without a single booming punt?

Good for him. See you soon.