A Second Helping of Von Miller vs the 49ers

Von Miller, with a Defensive Rookie of the Year award already on his mantle, has decided that he’s going to become a complete linebacker, and he’s been vocal about it.

He feels that he needs to add skills in run stopping and in coverage, and there’s little disagreement that he needs to. He’s already one of the best rushing linebackers in the game, and with work, I believe that he can become one of the top LBs of this decade. He showed progress in both areas of emphasis during the first half of Sunday’s game against the 49ers. Today, let’s look at how he’s improving in run defense.

The sun is pounding down through the Mile High air, it's over 100 degrees on the field, and Peyton Manning has just directed the Broncos to a 3-0 lead. The kickoff by Matt Prater sails through the end zone, and the 49ers take over on offense at their own 20-yard line.

As the play clock winds down, Alex Smith moves his fullback behind himself and runs his tight end across the offensive line, ending in an I-formation with the closed side on the offensive right.

The Broncos are countering by using an eight-man box, bringing six to the line with two linebackers behind them, Joe Mays and Wesley Woodyard. Elvis Dumervil is at defensive left end, Ty Warren is next to him at off tackle and Justin Bannan is head up on the center, playing nose tackle. Derek Wolfe is at defensive right end, with Von Miller standing up to his right. With Doom, Warren, Bannan, Wolfe, and Miller all coming at once, this is one heck of an attacking start to the game. Tracy Porter and Champ Bailey are in off man coverage. 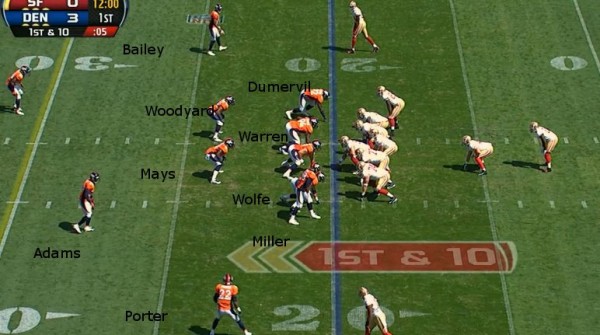 The ball is snapped, and the run is to the open side - what we sometimes call the weak side. Joe Staley (74), the left offensive tackle, fires into Wolfe, letting Miller give the OT a shove on the way past while the fullback draws a bead on Von. It’s a mismatch waiting to happen, and it unfolds quickly. 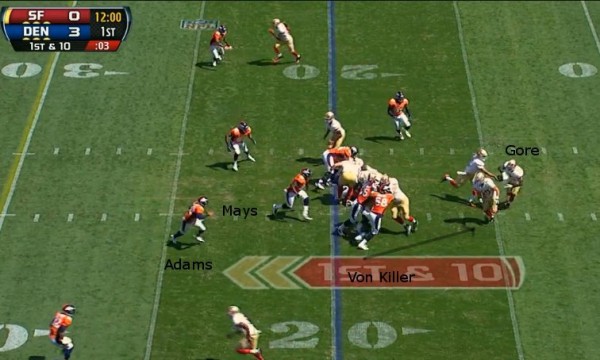 You might want to look at the left tackle, Joe Staley (74), blatantly holding on to the outside of Wolfe’s jersey and pads in the next image, but it’s not like it’s a holding call or anything. Note to Ginger - You’re full of it. These fake refs make bad look great. Look at Miller’s hands, and how easily he keeps the fullback, Bruce Miller (49, out of Central Florida), off his legs. That’s one of the keys to developing good run defense skills.

Frank Gore puts out a good stiff-arm, but Miller powers through it and knocks him down. It’s not the cleanest wrap-up in the world,  but Gore is a powerful guy, and it does the job. 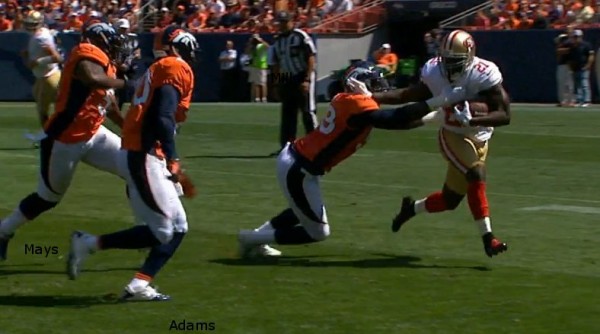 Mike Adams and Joe Mays are right there to help out, and Mays lays a hit of his own on Gore. Doom has hoofed it all the way from LDE, and Wesley Woodyard is backing up the north-south tackling of Mays. Derek Wolfe has shed the LT and is joining the party, while Mike Adams wisely avoided a flag for piling on, but could have made the tackle had Miller and Mays not handled Gore.

There are two things I take away from this in addition to how extremely well the Broncos' first team swarms to the ball (which is impressive):  Miller is using his hands very well to keep his legs clean, one of the keys to run support. Second, even though he didn’t wrap up on Gore, he hit him hard enough to knock him off balance and might have taken him down. We don’t need to wonder, because Mays was there to help hammer Gore into the turf. 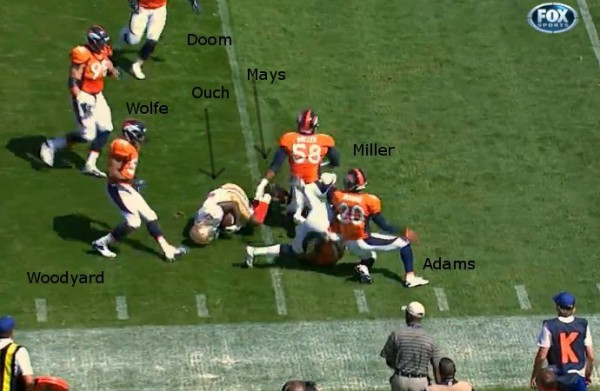 Five defenders arriving within moments is always a good sign. The play went for a loss of five yards. Miller’s ability to get into the backfield isn’t new. His ability to do so in run defense is another of the keys to his improved overall production.

If this was any kind of a preview at all - and the 49ers were clearly going with a very vanilla scheme, to be fair - the Broncos' starting defense is going to be a big step up from their performance in 2011. The second and third units may not be as strong as they looked in the Chicago game, but when they’re on the field, they won’t be in the kind of ‘six college free agent’ groupings that they are in preseason. Filling in with the starters, they have a ways to go, but they should be okay.

Miller, on the other hand, looks amazing. Here’s to watching him continue to progress over the course of the 2012 season. 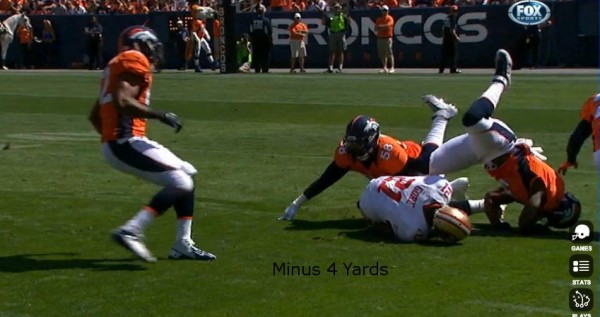 A look at Miller’s pass coverage is coming next. As far as the team, by the end of the first quarter, we knew everything we needed to about the offense. By the end of the half, the same was true of the starting defense. I’m starting to get worked up about Pittsburgh.