A Second Helping of Von Miller vs San Francisco

One of the goals that Von Miller has set for his sophomore NFL season is to improve both his run defense and pass coverage.

We’ve already looked at a run play where he showed that improvement - now let’s take a peek at some simple things that he - and the rest of the Broncos - have done to improve in pass defense.

13:39 remains in the second quarter of the preseason game against San Francisco, and the 49ers have scored a touchdown in response to 17 straight points from the Broncos.

If things go well this season, Denver will be facing a lot of obvious passing downs in just such a position - playing with a lead while the opponent tries to get back into the game. It’s 3rd and 6, and the 49ers have driven deep into Broncos territory - they’re on the 15-yard line, and they are seeking either a touchdown or a first down. 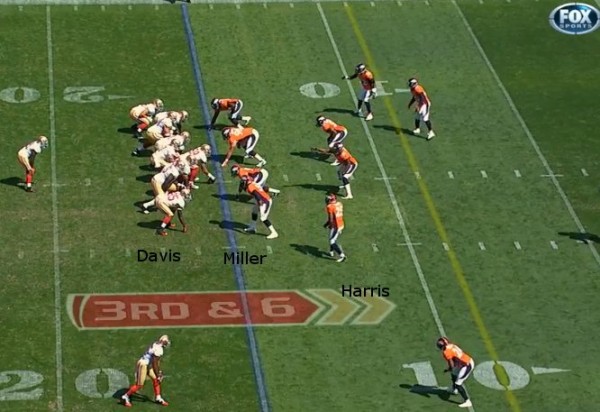 San Francisco is in a 13, or ‘Jumbo’ offensive formation. The lone WR, Michael Crabtree (15), is split out to the offensive right at the bottom of the screen, while the big tight end Vernon Davis (85) is lined up across from Von Miller. The other two receivers are in a blocking stance on the offensive left - the far one is TE Konrad Reuland (88), the other TE Demarcus Dobbs (40).

Davis fires out of his stance at the snap, and Miller uses the newly developed strength of his upper body to redirect Davis.  It's not a huge move, but it is an essential one. Miller jams him hard at the line of scrimmage. 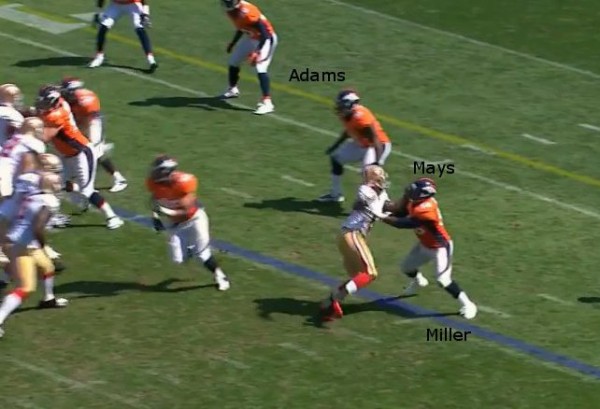 At this point, several key things happen. The Broncos are in one of Jack Del Rio’s preferred zone defenses. Champ Bailey has Crabtree covered on the edge - Crabtree will cut in toward the middle of the end zone without success.

The two tight ends lined up to the left of tackle Joe Staley both release as receivers, and Denver is ready for that. You can see that Reuland is cutting into the middle of the field, and Dobbs is heading for the end zone. Miller’s redirect is powerful enough that Davis stumbles. If there's a timing route involved, it just lost its timing. 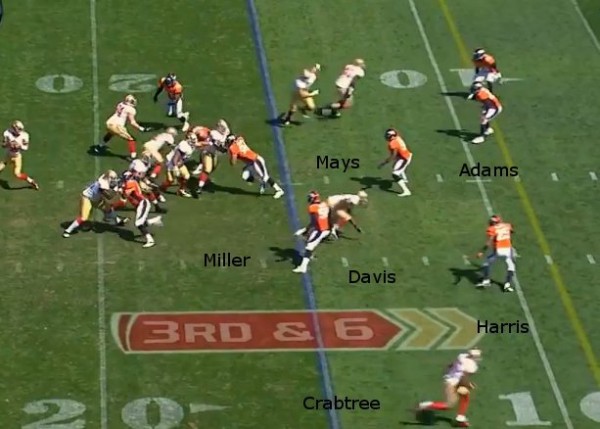 Miller hands off Davis to Chris Harris, who’s protecting the defensive left flat. He comes up on Davis, but Davis cuts across the middle, and Mike Adams is waiting there to take him on. 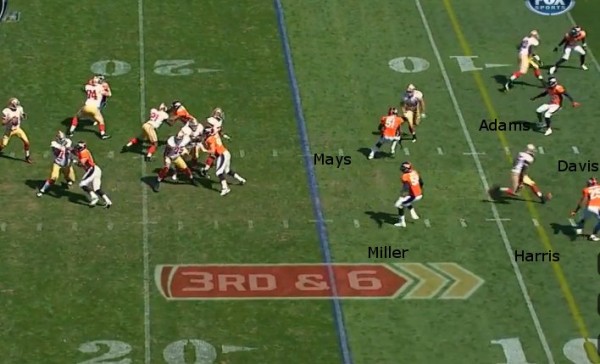 Notice how Davis is bracketed by Harris and Adams? Reuland (88) cuts to the middle underneath, but Joe Mays has him, and then is ready to hand him off to MIller, who’s waiting. Mays and Miller have the receiver bracketed, and Derek Wolfe - remember how folks said that he disappeared? - is a split-second away from planting Alex Smith into the turf. 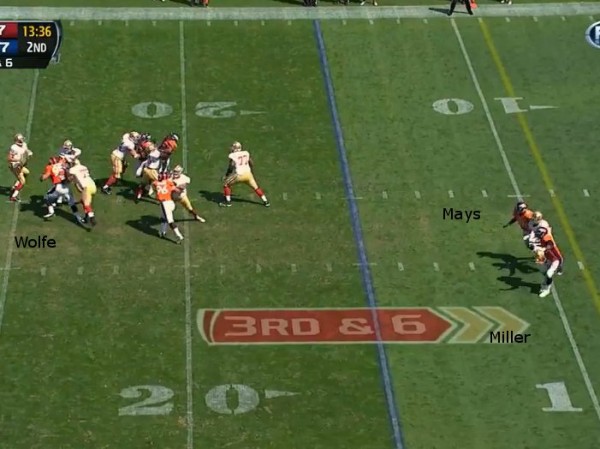 Smith wisely throws it away.

What I love about this play is the precision that the pass defense show. Miller redirects a tight end who outweighs him by ten pounds, causing him to stumble out of the gate. Davis then finds himself bottled up between Harris and Adams.

Crabtree is covered by Champ Bailey - enough said. The underneath man is handled by none other than Joe Mays and Miller, both of whom struggled at times in pass defense and coverage last season.

Tracy Porter has Dobbs covered in the corner of the end zone. And, it never hurts to have your off tackle attacking the quarterback to rush the throw (and being clocked in the back at the same time).

So, jamming a bigger player (and a good one), handing him off to the nickelback, and then catching the underneath receiver coming across the field, created a near coverage sack. Only Smith’s quick move to throw the ball away prevented it.

That’s nice work by all concerned, and it demonstrates how Miller’s coverage has improved already this year. Jack Del Rio has really done a job with his first unit defense, and that’s something to look forward to.