A Second Helping of Von Miller and the shed

After Ronnie Hillman coughed up the ball during the first quarter of the regular season finale against Kansas City, the Broncos played a series in relative chaos. Peyton Manning took a rare delay of game penalty; three snaps later, Ryan Clady jumped to a false start.

The result? A three-and-out, the first of just two on the day for Denver.

As has usually been the case this season, their struggles didn’t endure. The Broncos marched down the field like the champion team they want to be, pausing only briefly between possessions during the Eric Decker and Demaryius Thomas highlight show.

It was also time to stop the Chiefs before they could gain any momentum. What happens here is part of that; great plays often come from great fundamentals applied with great effort.

With 5:19 left in the second quarter, Von Miller demonstrated something that’s essential, whether you're a lineman or a linebacker. It doesn’t hurt if you're a defensive back, either - I’ve seen Champ Bailey schooling offensive blockers in it repeatedly. It’s the shed maneuver, and it’s one of the keys to an effective game, whether stopping the run or defeating an offensive TE or lineman when attacking the passer.

Something that many players are careless about is the technique of slowing or stopping just before taking on the blocker and establishing one's base. When a player is in their base, they always have the forward foot on the side that they will take the blocker on with. Properly done, that also leaves the opposite arm free to harass the ballcarrier, something that we discussed recently while studying the play of Derek Wolfe.

If you try the shed with your left hand out and your right foot forward, the blocker can turn you like a gatepost, every time. You have to get into your base footing properly to defeat the blocker. If it's an offensive tackle, he might need to get his shoulder into them, again using the same side shoulder and front foot, and exploding upwards while pushing off.

When Miller does it, it often all looks like a single movement as he goes through them in one continuous explosion of energy. That takes incredible form as well as his innate speed and balance.

Jack Del Rio talked about the importance of the shed last Thursday:

Some of the things we’ve done with technique, in terms of shedding blocks and being able to stuff blocks, get off of blocks and show up at the ball, those have been instrumental in us having a chance to slow people down in the run game [and] make them throw the ball where we have some very talented pass-rushers and some guys that can cover man-to-man.

Let’s watch Miller setting up the shed with perfect form. He’s learning his technique from JDR and linebacker coach Richard Smith, one of the best in the NFL, and a 30-year veteran of coaching the position, which has greatly helped Von's development. Smith and Del Rio are completely on the same page, speak highly of each other, and together, they’re producing a linebacking corps (Miller, Wesley Woodyard, Keith Brooking, Danny Trevathan at nickel, and D.J. Williams in spot work) that’s as good as any in the game today.

Miller starts from the right defensive end of the line. He’s moved around frequently to increase his unpredictability, which raises the offense’s level of confusion, a quality that Del Rio rightfully loves increasing. Donald Stephenson had been injured while cut- or chop-blocking Derek Wolfe, and Stephenson himself was replacing starter Branden Albert. Who was the left tackle? Let me put it simply - the Chiefs only have two left tackles and one right tackle on their depth chart. This wasn’t any of them. There was blood in the water.  If it matters, it’s Jeff Allen (71), a rookie out of the University of Illinois.

The Chiefs are lined up in 12 personnel on 2nd and 10. Denver has countered with six men on the defensive line, in theory to put a stop to the run game. With two linebackers over the one (A) gap, they’ve got eight men in the box to stop the run. They’re lying, too. They’re equally ready for run or pass. 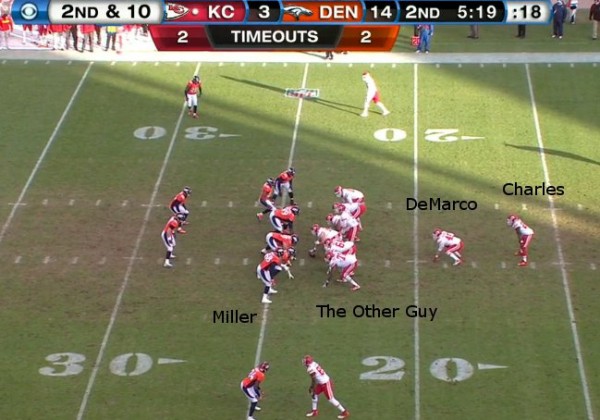 At the snap, Woodyard drops into coverage or second-level run support, depending on the play. Miller barely taps the left tackle on his way past him, and The Other Guy leaves our tale. Von sees the fullback, Patrick DiMarco (49), coming at him, and here’s where the small things take on a big value.


The first thing that Miller does is sink his hips. He sees DiMarco setting him up low, and reacts accordingly. 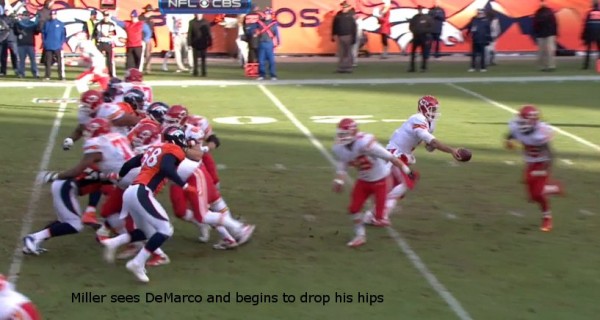 In the next two images, you'll want to note a few key things. First, Miller’s getting lower and lower to match DiMarco, who’s obviously trying to submarine him on the block (as he’s supposed to). Von’s left foot is still back as he sinks his hips. Next, his left foot comes up to move out front - he’s got his left hand out to handle the shedding of the fullback, the foot on the same side with that hand that’s doing the work of pushing off. That’s how you establish your base. His shoulders are squared up with the right arm free. It’s straight out of Complete Linebacking, a perfectly textbook move. 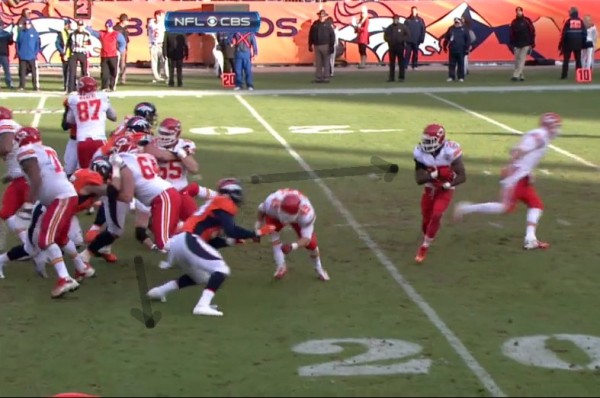 When you talk about Miller, it’s easy to simply marvel at his natural gifts, which are absurdly lavish. That doesn’t take a thing away from his tireless work on basics, though. Miller is studiously polishing every aspect of his game. 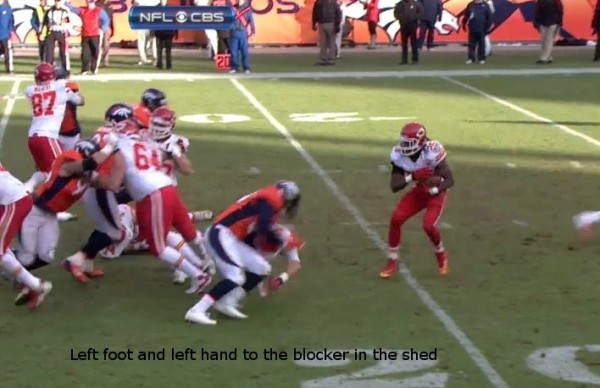 Now, Miller has shed the blocker and is moving into the tackle phase of the play. He’s already in position - he’s past the LT and has taken care of the blocking back, leaving his right arm free. He has the outside edge set, and Jamaal Charles has cut the corner a bit too sharply for his own good. Miller uncoils from that low stance and from his hips, using his core musculature, and slams into Charles, dropping him backwards for a loss of four yards on the play.

By the way, it’s a small point by itself, but notice in the first shot below that Miller’s helmet is cutting off Charles’s angle to the outside. Every linebacker should keep their hat between the RB and the edge on the play - if they miss, their help comes from the inside, so they keep their helmet between the RB and the sideline. It’s just one more small example of what Miller brings in technique. 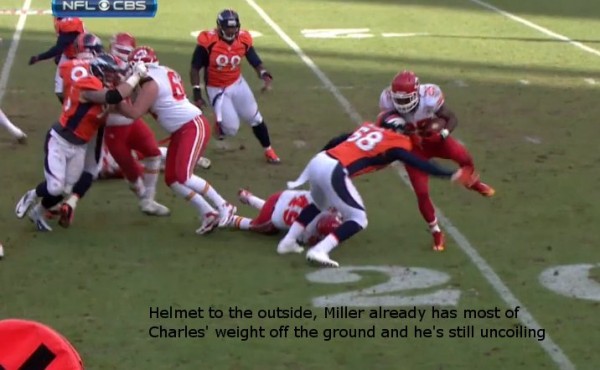 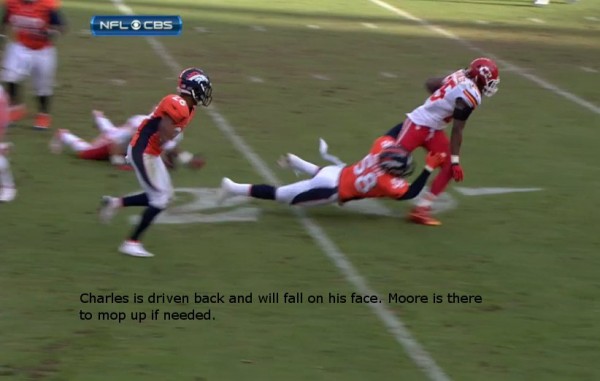 KC isn’t built to handle 3rd and 14. They didn’t, either. Denver would give up five yards to them on a neutral zone infraction, but then Mike Adams (who has been a great pickup for the year) provided a clean tackle on Derek McCluster’s reception underneath, four yards short of the first down. KC had to punt.

By the way, if you thought that Derek Wolfe’s sixth sack of the year on the next KC series was a bull rush, you missed the best part. Go back and look at his brilliant hand fighting on that play against right guard Bryan Mattison (64). His hips are lower than Mattison’s, establishing a lower pad level with his own body at the right upward angle to increase leverage. Explosive first step, pad level and leverage, hand fighting - they’re always the keys to beating the linemen, creating pressure and sacks. and they’re all visible on that play.

Small things. You could miss them, if you don’t know what you’re looking for. That’s okay, too - you can marvel at Von Miller without knowing the details. On the other hand, the more you know about him, the more remarkable he becomes.

And that isn’t a bad thing: 68 tackles (28 for loss), 18.5 sacks, six fumbles forced, two passes defensed, and a pick-six for good measure over the 2012 regular season, and he’s still getting better. That’s the kind of player you dream about having.