A Second Helping of Tracy Porter vs the Steelers

There were several brilliant performances by the Denver Broncos on Sunday night - from Peyton Manning, the defensive line, Von Miller, and Wesley Woodyard, among others. But despite the abundance of bright spots, the play of Tracy Porter still stands out.

I watched film of Porter from 2010 and 2011 and understood the one-year contract Denver gave him. He was very slender - skinny, really. He didn’t have the power or form to tackle right - often as not, he threw himself at opponents' ankles and hoped for the best. He struggled with run support and had to battle in press coverage.

This year, he looks like a different player physically. His positives from earlier were that he has a textbook backpedal, was and is cheetah fast, flips his hips beautifully, and takes smart gambles. Those attributes are still present, and Jack Del Rio and defensive backs coach Ron Milus have him wrapping up, driving upward, and tackling hard. They haven’t tried to pull him back when it’s time to gamble, either.

Like other quarterbacks will do, Ben Roethlisberger appeared to make a concerted effort to throw against Porter in man coverage, and only threw to Champ Bailey's side when the Broncos used a zone defense. It’s exactly what Denver brought Porter in to do. They needed an experienced NFL cornerback with an aggressive attitude and a short memory - every CB gets beaten. You can’t let it affect you.

"That goes to having Champ Bailey on the other side," Porter said. They're not going to test him, they're going to test the new guy on the team to see what he's all about."

Of course, the new guy essentially finishing off the Steelers' chances with his late pick-six of Big Ben. You always look for players who step up in a big way when the game is on the line. Porter now has three career touchdowns, all of them game-clinchers for his team: all three have occurred with under 3.5 minutes to go and his team up by a single score. Porter, who will make $4M on his one-year deal with the Broncos, bursted out of the starting gate with a performance that suggests he could be with the team for a long time to come.

Let’s look at why Porter was able to make such a great move on the ball for his big play.

In its simplest terms, Tracy stepped in front of Emmanuel Sanders as the receiver was running an in route with the line of scrimmage at the Pittsburgh 43. Porter redirected Sanders with textbook press coverage, turned him back to the sideline, jumped the route, and returned his interception for six points, icing the game.

"I had the safety (covering) over the top, and I was going to be aggressive on anything underneath," Porter said.

As a theory point, Porter needed to know that the safety was there if he jumped the route and missed, because you can’t give up the big TD at that point in the game. You have to know your safety has your back, and Porter did. With help coming from his safety over the top (between the receiver and the goal line), he was going to take on anything underneath (between the line of scrimmage and the receiver).

Porter was also quoted as saying, "Champ Bailey's on the other side, and I don't know too many quarterbacks who want to go after him.'' It was man coverage, so he knew where the pass was likely to go.

With Pittsburgh down by only six with 2:03 to go in the fourth quarter, the Broncos know the Steelers have to throw the ball. Pittsburgh is in 11 personnel; Antonio Brown takes a short motion to the inside and comes back to his slot position just as the ball snapped. Nickel corner Chris Harris, who had come back in after getting his bell rung two plays before, shadows him. Porter is across from Emmanuel Sanders (88). 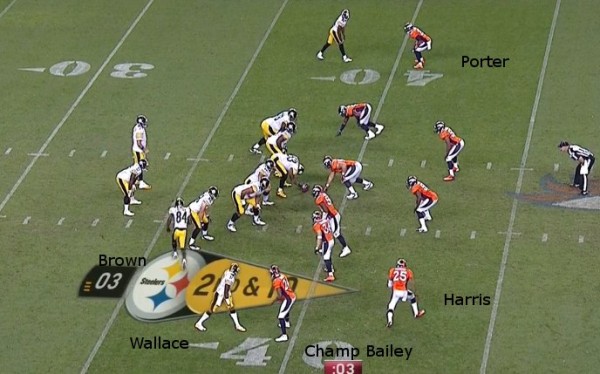 The key to this play is simple - press coverage. Knocking the receiver off his route right at the line is a simple way to defeat a timing route; redirect the receiver, and disrupt the connection between the QB and his target. Champ Bailey has tight coverage on Mike Wallace, who is Ben Roethlisberger’s first read, but Bailey’s coverage is predictably too good to throw into. Sanders tries an inside move, going into his ‘in’ route. He gets off the line, but Porter’s waiting and presses him hard. 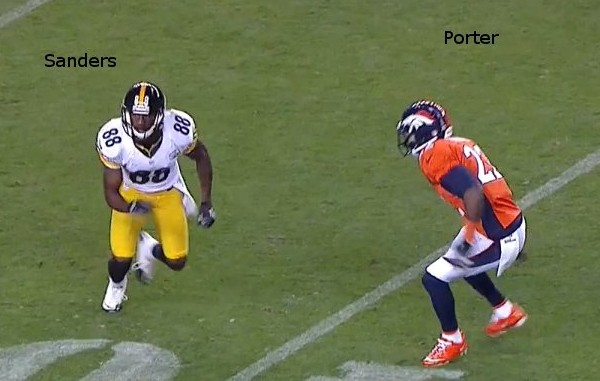 Notice Porter’s posture - on his toes, knees bent, hips low, ready to move in any direction. In the next image, Porter quickly jams Sanders up, well within the five-yard legal boundary. Not getting through, Sanders will have to go back toward the sideline if he wants a shot at the reception. 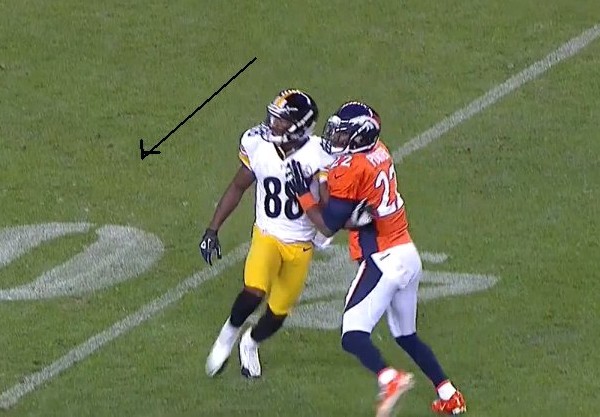 Porter has maintained contact, slowing Sanders. Porter’s hands are on the receiver, jamming his left up under Sanders's pads. Porter’s on one foot, his right foot is planted to power his leverage, his hips are dropped, weight forward, and his knees are bent. It’s a textbook press coverage move. Sanders reverses and tries to break for the sideline, attempting to cut back outside.

But, notice Porter’s eyes, below. He knows the route, he’s redirected the receiver, and now he wants to see the pass coming in. This is where Sanders should be able to come back to the ball, but that’s not going to happen. 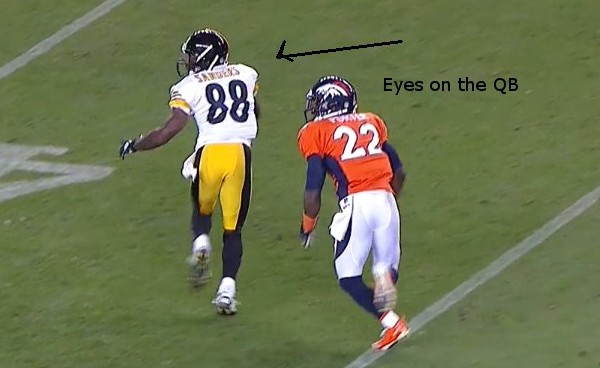 Porter’s watching as the pass is released, and he jumps the route, cutting in front of Sanders. It’s like stealing - Porter is in perfect position, and there’s nothing that Sanders can do but fall down, losing his balance by trying to reach for a pass that’s already gone. Talk about getting owned on national TV... 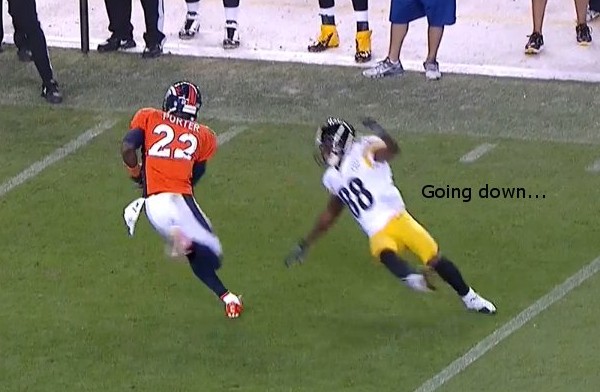 It’s all over but the shouting. 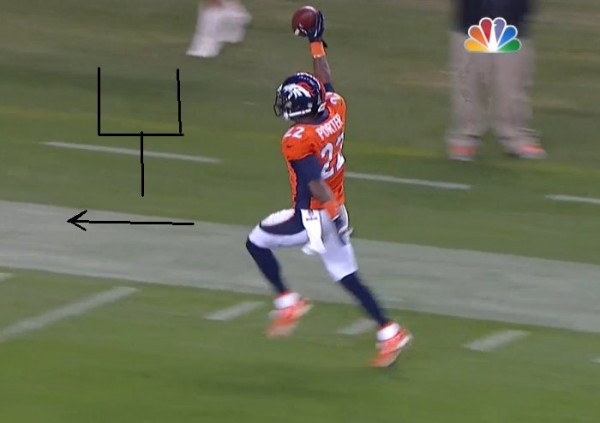 Porter had an incredible night. In addition to his interception, scoring the touchdown that put the game out of reach, he had eight tackles and five passes defensed. He is one of only 17 players to achieve both in one game since 1994. That’s just under one player a year achieving that - a pretty impressive start to Porter’s Denver career. Since he added an interception for a TD, that brings the total number of players down to only four who have achieved that combination since 1994.

To put these numbers in perspective, Andre’ Goodman, the man Porter replaced opposite Bailey, defensed ten passes in 16 games last season. Porter’s halfway there after just one game. Deciding on him was a heck of a move by Denver's personnel department - Matt Russell, Keith Kidd, Anthony Kelly, and the rest.

Tracy is in Denver on a one-year contract. When I watched film of Porter with the Saints, I saw a fast, talented player who looked slender to willowy (injuries played a role in that), who often tackled by throwing himself at opponents’ ankles and struggled at times to handle press coverage. What I saw on Sunday was anything but that player: he was physical, a willing tackler who hit upward and wrapped pretty well, willing in run support, and aggressive in press.

Clearly, Tracy has decided to change his body, his approach, and his game. It was just one game, but what a game it was.

If it continues, his current contract might only be his first in Denver. The team has been high on him since OTAs, and on Sunday, his play was tough and outstanding.

Congratulations to him on a great game - he’s earned it.