The first was an interview with Joe Flacco on the Dan Patrick show, in which Flacco asserted that the key to a Ravens victory would be establishing the run.  While that's not exactly a news flash--we all knew the Ravens wanted to run the ball--it confirmed again in the minds of fans and likely the Broncos coaches the perception that the Ravens were going to give the Broncos a healthy dose of Ray Rice and rookie sensation Bernard Pierce.

And why wouldn't they?  The dirtly little secret that emerged from watching film of the first matchup between the teams was that the Ravens, after stumbling on their first three drives, experienced a brief window in which they were indeed running the ball well against Denver.  In a series of three consecutive plays in the second quarter, the Ravens ripped off runs of four, fourteen, and fifteen yards.  The drive stalled on a penalty, or it's likely the Ravens would have scored.  After that, the running game was generally abandoned by the Ravens because the Broncos got up in the game by two scores.

The point, though, is that both Del Rio and Caldwell knew the reality--the Ravens were a legitimate threat to run the ball, no matter what the score said in Week 15.

The second interview was with Anquan Boldin on Sirius XM NFL Radio and confirmed in a different way what the Ravens and Broncos were seeing on film.  When asked why the Broncos were such a strong defense, Boldin indicated that it was Denver's ability to sit back in a Cover 2 shell and stop the run with their front seven; further, they could also generate pressure with the same front seven.  In other words, the Broncos hadn't been resorting to a lot of tricks.  They had been beating people straight up.

Again, the film from Week 15 confirms this.  From the beginning of the game, the Broncos played a lot of Cover 2, Man Under coverage on passing downs, and without the threat of a running game, the Ravens didn't really have the chance to test the Broncos to see if that second-quarter success could be replicated throughout the rest of the afternoon.

There's no doubt that in the rematch, Caldwell was aiming to find out; Del Rio was determined to stop him.

Just how can we be sure of this?  Well, the truth is we can't be completely sure, but it's very likely.  In the rematch last Saturday, the Ravens ran the ball three out of their first five plays until they realized they were running into an eight-man box, not a seven-man box as in their first meeting.  Essentially, Del Rio changed his defensive look between the two contests.  Instead of playing Cover 2, Man Under like he had previously, he switched to a Cover 1, which brings the strong safety into the box and leaves the free safety as the only deep defender in coverage.

It took Caldwell only a series to crack the code, which brings us to Torrey Smith's first touchdown.  Here's the pre-snap look: 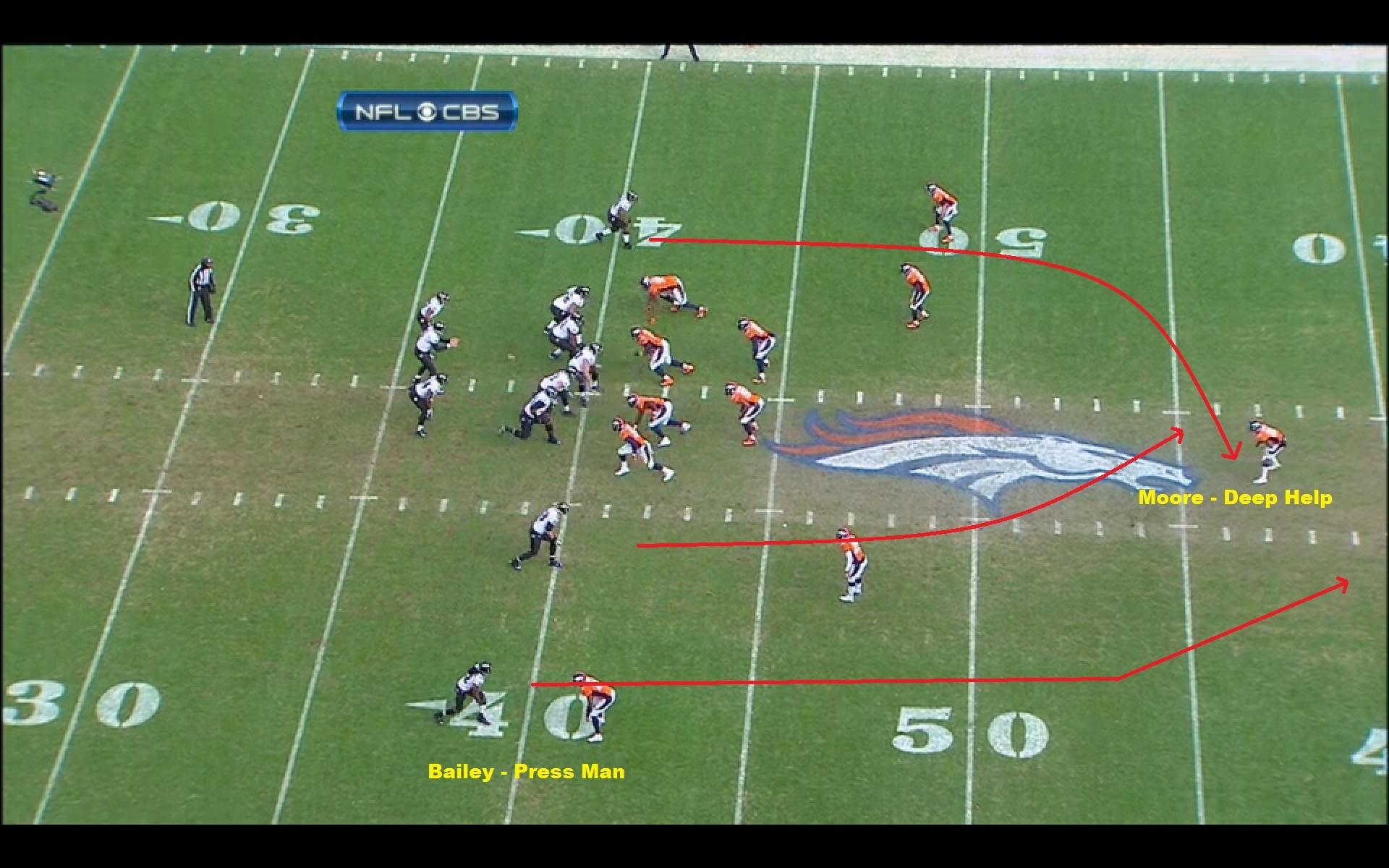 Rahim Moore is playing behind Champ Bailey, who is in press man coverage, and Tony Carter and Chris Harris, who are in zone coverage.  This second point may surprise because typically, Cover 1 employs man coverage underneath--sometimes in press coverage, sometimes in off-man coverage.  At first glance, Carter and Harris could be playing off-man, but they're really not.  Their 45-degree positioning, along with their eyes on the quarterback, give the zone coverage away.   As it turns out, Mike Adams is playing zone as well.

And this is where it gets interesting.  Caldwell uses what amounts to a double-cross concept--a common and clever way to attack Cover 1.  Usually, the idea is to use the deep route to blow the man-free safety deep in order to hit something over the middle.  In this case, the Ravens, knowing how aggressive Moore is at free safety, and knowing that Bailey would be playing tight-man on Smith all game - just as he had done in Week 15 - are hoping for the exact opposite.  They want Moore to focus on crossing patterns like he does here: 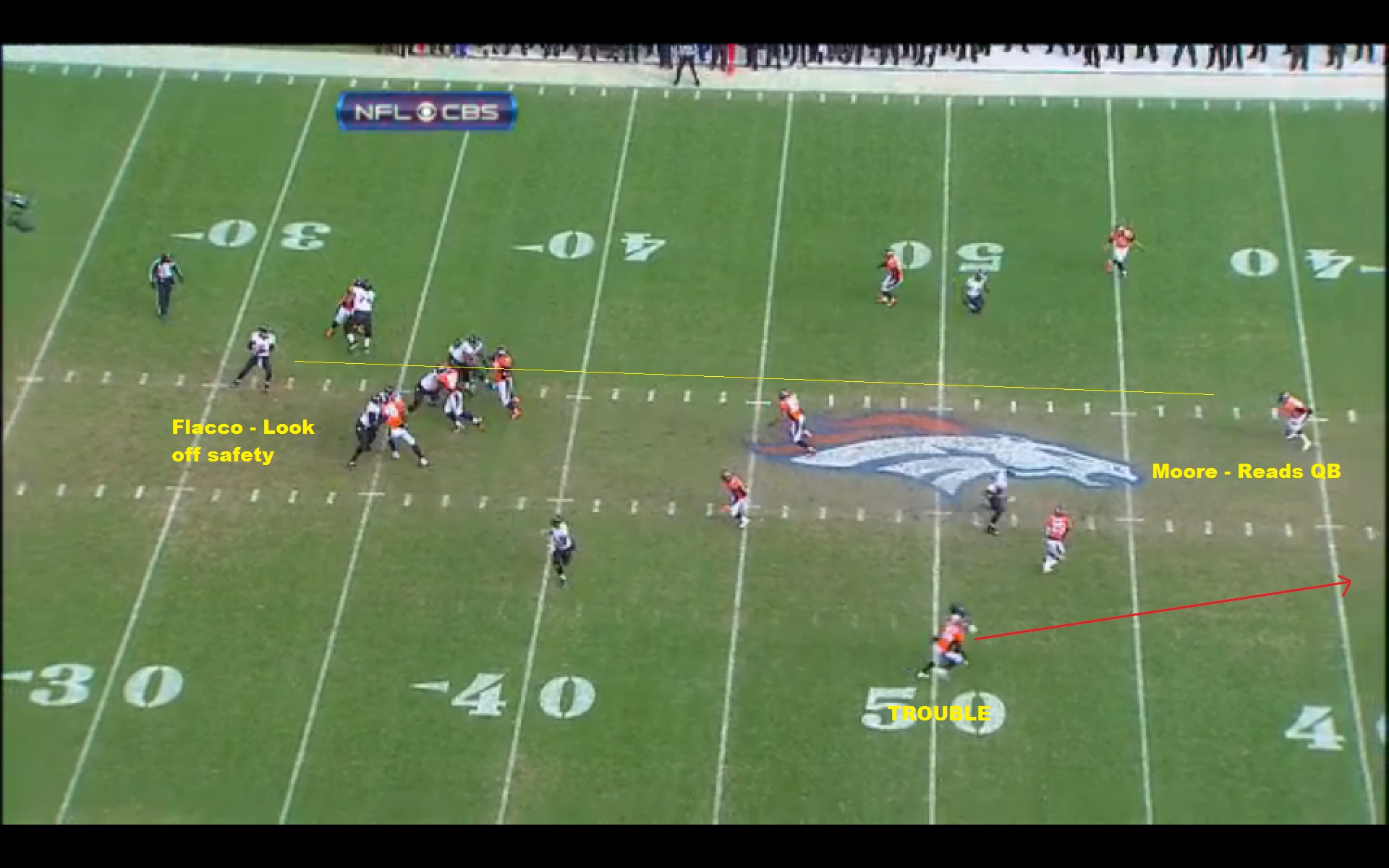 Whether the Broncos are playing zone underneath here is somewhat unimportant in the big picture (we'll get to that in a moment).  What's important is what Flacco is doing in the frame--staring Moore down while Torrey Smith is using his speed and his hands (a push-off he seems to have developed between the two meetings) to create separation from Champ Bailey.

After I watched this play the first ten or so times, I kept thinking that Moore is completely oblivious to Smith and Bailey simply because he screws up and bites on the crossing routes.  That's likely what the Ravens are thinking in running this play the way they do.  However, after realizing that Adams, Harris, and Carter are all playing a match-up zone, it becomes at least as likely that Moore is simply doing his job, which is to play centerfield and leave Bailey to his own devices--much like a box-and-one in basketball.

Here, it appears as if the linebackers and defensive backs (including Moore) are in a six-man match-up zone, while Bailey is doing battle on his own tiny island, no matter where Smith is going.

But Bailey is playing the outside shoulder, you say.  He is expecting inside help.  This just doesn't appear to be.  Bailey is beaten to the inside by Smith on his release--nothing more, nothing less.  In the above stillshot, it just seems as though Bailey is playing outside because he has already lost the battle with Smith at the line of scrimmage.  Here's the result of the play: 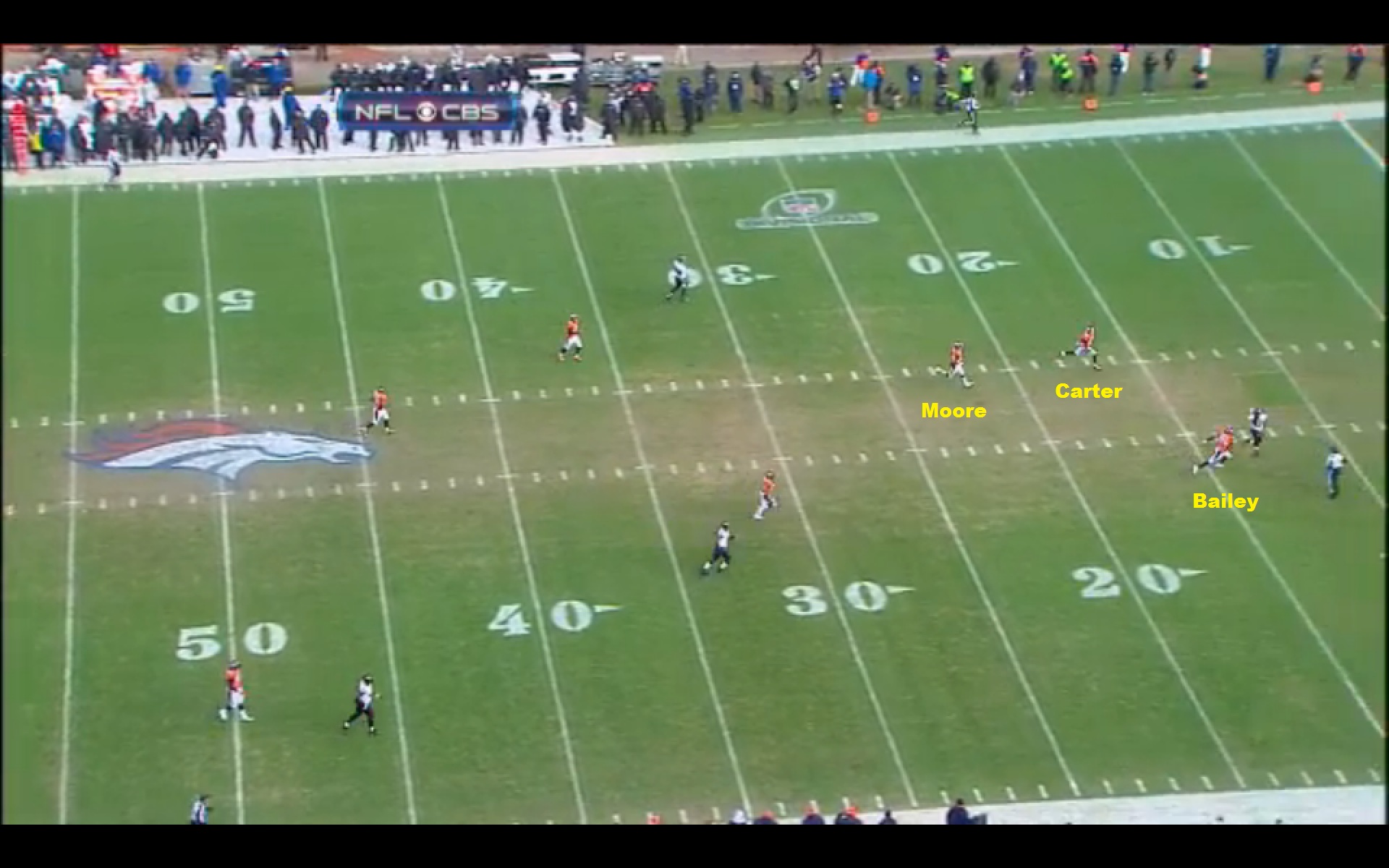 This stillshot is precisely when Smith catches the ball.  Notice how much farther Moore is away from the ball than Carter.  I believe this is more evidence that Moore is supposed to stay in his middle zone.  He never even considers looking Bailey's way during the entire play.  Either Moore is the poorest safety on the planet, which is highly unlikely (excluding the Hail Mary at the end of regulation), or he is part of the zone shell.

It's not shocking that Del Rio would have put this package in for Baltimore.  During the Week 15 matchup, Bailey was much more physical at the line of scrimmage with Smith.  In fact, Bailey was dominant. Smith had a hard time even getting into his routes.  It's a reasonable expectation that Bailey would have done so again.

Before we're done, though, it's well worth pointing out something else that stands out from these frames, and it's one of the reasons Bailey struggled.  The Broncos simply failed to get pressure.  In their first meeting, Flacco had, on average, only 2.46 seconds before he had to throw, scramble, or be sacked.  In their second, Flacco averaged almost a full three seconds (2.95).

How is that possible?  There are three reasons, in my view.

First, the Ravens did get their offensive line back and healthy, so let's give them that.

Second, they gave Flacco more max protection in the rematch.  The touchdown to Smith is just one example.  Play after play, especially out of the gun, the Ravens were determined to keep an extra blocker to give Flacco the time he needed.

Third, the Ravens did an effective job of passing on running downs (the touchdown to Smith came on a 2nd and 2) and running play-action so that the Broncos couldn't pin their ears back.  Had the Broncos been able to go up by two scores at any point in this game (and I'm talking to you, Matt Prater), this all could have changed.  But they didn't--the pass rush became average.

This shows up in a significant way when looking at both Elvis Dumervil and Von Miller's snap counts:


The snaps (as a percentage) in which Dumervil and Miller were rushing the passer in the rematch are horrifying--some of their their lowest percentages of the season.  Miller's percentage was his fourth lowest (behind the games against Houston, New England, and week 17 against Kansas City) while Dumervil's was is fifth lowest (behind games against Houston, New England, and both matchups against Kansas City).

The main lesson is that the Broncos can't cause as much damage with their rush when playing in close games or from behinds (or against teams that rarely pass, Brady Quinn).  But it also raises another question:  Should Von Miller ever drop into coverage a dozen times, no matter the situation?  Sure, he's become a complete linebacker, but I'd rather have the next Derrick Thomas rushing the quarterback if I can get it.  Had Von rushed the passer in the 59-yard strike to Smith, it may not have mattered if Bailey was beaten or not.  Flacco might not have had the time to find out.

In the second half, the Broncos went back to their Cover 2 shell as Boldin thought they might do, and the Broncos had more success--we count the Moore debacle as a freak accident--but by then the damage was done.  The Cover 1 had failed, for a lot of reasons, to produce results.