A Second Helping of Tipped passes in the no-huddle

For well over a decade now, Peyton Manning's litany of skills has kept him in the conversation regarding who is the best quarterback in the NFL. He may have had four surgeries on his neck, and he’s 36 years old now, but if the topic is his supposed deterioration, try telling it to the 49ers starting defense he dismantled on Sunday.

One of those skills is the ball-handling required in using play-action to freeze defenses. With the running ability of Willis McGahee (and Ronnie Hillman in the wings), defenses have an even greater reason to respect Manning’s play-action passing.

When Manning moves to a no-huddle offense, the value of play-action becomes even greater - defenses have far less time (if any) for substitutions, so the balance that’s always a goal of John Fox's offense becomes an even greater weapon for Denver. Whether the Broncos want to run or pass, they’ve got an effective and productive scheme in place. Stopping the offense becomes more difficult still when any adjustments made by the defense end up being read and turned against them when Manning audibles.

There’s one drawback to Manning running the no-huddle - it’s believed that going that route increases the number of passes that are tipped at the line of scrimmage. No-huddle or not, batted passes are a joker in the otherwise stacked deck that is the 2012 Broncos offense - they can lead to interceptions that might save the defense from being scored upon on yet another drive.

The Broncos have had at least one pass redirected in two of the first three preseason games, so it’s fair to say that whether the conventional wisdom on this problem and the no-huddle is accurate or not, the tipped pass is a concern.

Against the 49ers, the deflection came at 14:57 of the fourth quarter when Tony Jerod-Eddie (63) was engaged with backup guard Tony Hills, but got his hands up and into a Brock Osweiler pass. Look at where Hills is in relation to the defender: 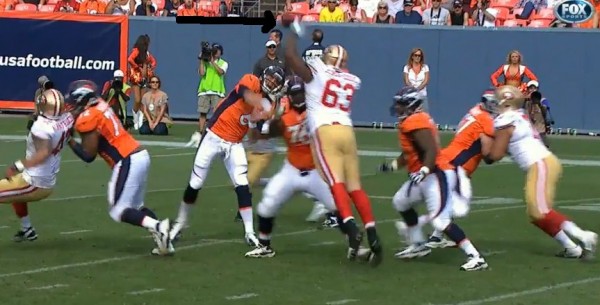 Against the Seahawks, a costly tip occurred at 10:55 of the first quarter with the Broncos in a first-and-goal situation at Seattle's nine-yard line, when defensive tackle Red Bryant (79) deflected the ball into the waiting hands of linebacker K.J. Wright. It cost the Broncos a probable score.

Plays like that can determine a game. Now, look at where Zane Beadles is in relation to Bryant: 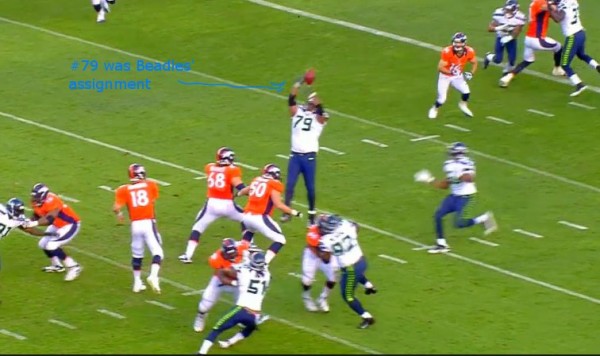 If you look at the image, Beadles has his left foot far behind him, which is good if he has to anchor against Bryant’s pass rush, but which leaves him disengaged from his assignment. Bryant is his sole responsibility, and J.D. Walton is uncovered, so there’s no potential issue of needing to handle another rusher.

Glancing back at Tony Hills in the first image, he’s also disengaged from his assignment. In both cases, the opponents are engaged before the DTs step back, leap, and block or tip the pass. The tipped passes are following a pattern.

From high school football on up to the NFL, offensive linemen are taught that if their assignment gets his hands up, they have to hammer him in the stomach or diaphragm, just below the pads, dropping his hands.

The weapon of choice is the palm heel strike - called a ‘shotei’ in the Japanese fighting arts - and it’s identical to the technique used in football, including the NFL. I’m a smaller guy, and I used it to easily break four inches of pine at a time - the 300+ lb behemoths can do a lot of damage with it, very fast.

The point is simple - the OL has to control the defenders on pass plays. If they let their assignment step away, they didn’t lock in to them on the first clash. There’s a need here for a higher level of aggression, making sure that the defender can’t step back by having the offensive lineman’s hands locked into the area just outside the numbers.

If they control the defender without locking in (which is fine), they still need to be aware of the potential for a tipped pass and aggressively move to prevent it. You do that by getting close, keeping your hands on them and driving your palm heels through their midsection if/when you feel their arms starting to raise.

It’s not rocket science, but it’s counterintuitive: the lineman is generally focused on keeping the defender away from the quarterback. When the DT steps away, there’s a tendency to naturally hold the status quo and let them move back away from the QB

But you can’t do that and control the DT at the same time.

89.74294% of the time, more or less, passes are tipped as they cross the line because the lineman lost control of his assignment. I understand why it happens, but the solution was taught in high school ball.

I’ve read coaches who said, in effect, that if you’re not controlling him, he’s controlling both you and the situation. Whether a defender steps back to tackle the quarterback on a draw (or scramble), or whether he’s stepping back to raise his hands into a passing lane, it’s up to the offensive lineman to aggressively pursue the DT, getting into his face and forcing him to focus on staying upright. The blocker has to be in contact to feel the defender’s hands going up, and he has to be close enough to drive his strike deep, forcing the DT to drop his arms. It works, but it’s an aspect that’s often neglected.

When you see a defender get his hands up and tip a pass, you've also seen an offensive lineman getting beaten. Most folks will blame the quarterback.