There has been no shortage of exceptional special team players with the Denver Broncos this year. Among them is linebacker Steven Johnson, currently second to Jacob Tamme with four tackles and an assist.

Johnson's signature play of the season was his Week 4 blocked punt and touchdown return against the Eagles that resulted from two factors: a quick explosion off the snap to the right side of Eagles long snapper Jon Dorenbos (46), and blown blocking assignments by the offensive line. Let's take a detailed look at what happened.

As you'll see below, the Eagles put four men on the offensive right - the special teams guard and tackle, plus two more - running back Chris Polk (32) and safety Colt Anderson (30). Johnson makes his charge through the A gap between the center and right guard - the guard is ‘covered’ (looking directly at) by Johnson but blocks down (to his own right) on Adrian Robinson (57) while the snapper blocks to his left, making Johnson's charge up the middle easier. 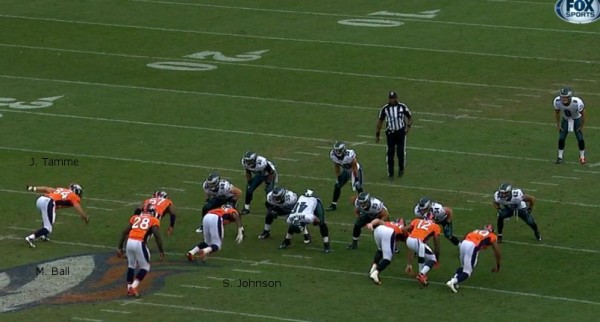 Polk goes outside to block Jacob Tamme, and Anderson is caught inside as Johnson comes off the snap perfectly. Linebacker Brandon Graham (55), playing right guard, goes to his own right, blocking down on Robinson. Casey Matthews (50) also drives to his right, opening with a ‘bucket step’ (to the rear and, in this case, to his right), anticipating a mad dash to the ball. Dorenbos, for whatever reason, blocks to his left, effectively triple-teaming Joel Dreessen because Andre Caldwell (12) drops back, rather than attack the punter, thus leaving an extra blocker.

Taking advantage of Dorenbos’ move, Johnson shoves him at an angle from right to left, and uses the momentum from his push-off to create even more speed on his attack.

The ‘shed’ techniques of a linebacker (including this one) are, according to linebacker guru Lou Tepper, the most important skills a linebacker can develop. Johnson does this so fast that the offensive right side blockers are caught unawares. That’s why the shed matters so much.

I’m going to put a second image up of Johnson’s technique on the center below, to show the problems with the Eagles' blocking assignments. Notice that Robinson has his arms out, sealing off Johnson’s attack from Matthews, and helping define Johnson’s lane? That suggests that this is a designed play - Robinson knows to do that.

David Bruton (30) is beating his man around the edge one-on-one and attacking the punter; few of the Eagles even see the blocked punt. Graham is either attacking Montee Ball or is already getting downfield - probably the latter.

So far this year, I’ve watched Broncos making impact plays by holding to their fundamentals and outperforming their opponents. Johnson is showing that he’s going to be ready when there’s an opening at middle linebacker, and he has a bit more experience. Developing depth is one of the keys to sustained winning. 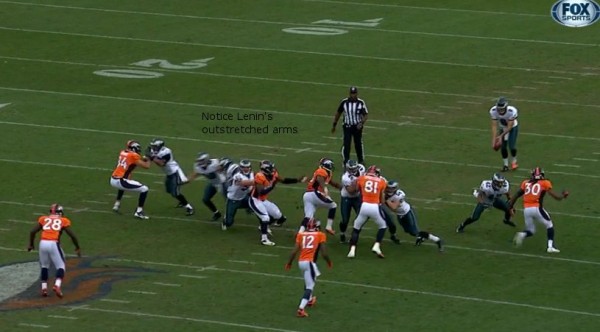 Twice in about two seconds, Johnson shows his speed, football intellect, and knowledge, after defeating the line of scrimmage. His first smart technique is in moving to the punter’s right side when attacking the punt, to avoid any possibility of a roughing penalty.

The second point of note comes when Johnson steps to own his left to pick up the ball. He almost reaches toward it from behind, then catches himself and moves out to his left (where he should go) so that if he muffs the recovery, he can still move after the ball. If one tries to run in from behind a fumble and misses, they're just going to overrun it.

If he wasn’t trying for the TD, Johnson should have just slid to the ground around the ball, fetal-style, to prevent anyone else from prying or kicking it out, but his technique is solid for six quick points. 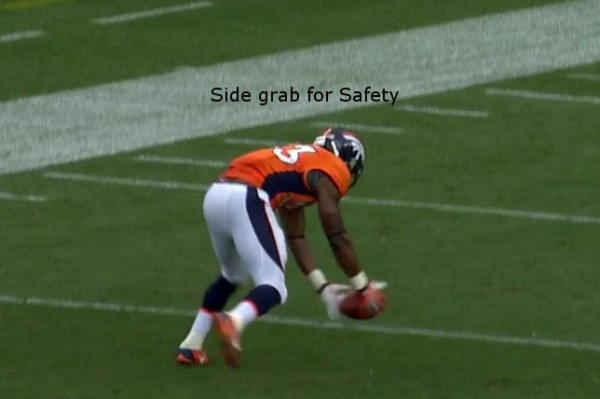 Accompanied by his escorts, Johnson dashes into the endzone for the score. This is a very heads-up play, start to finish, from one more among Denver’s long list of young, skilled players. 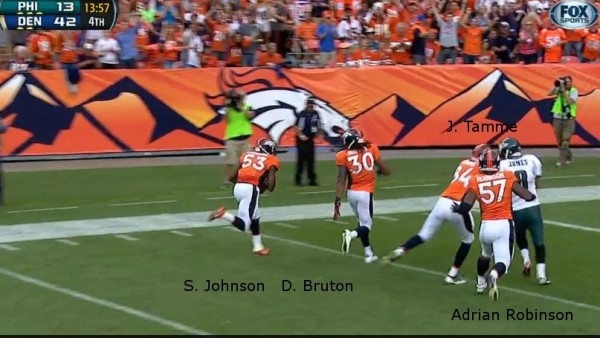 Special teams have indeed been very special for Denver this year, and combined with the barrage of Peyton Manning’s incredible passing, this play was a final backbreaker for the Eagles.

I seem to recall another young undrafted linebacker who started out on special teams and has gone on to start for Denver at middle linebacker. Johnson may be on the road to a similar career path to Wesley Woodyard’s - I love watching him on special teams for now.

Whether it’s Nate Irving, Holliday, Bruton, Johnson, or Jacob Tamme (who has six ST tackles in his past three games), one or more of the special teamers seem to be stepping up every week. That’s going to go a long way towards moving the Broncos to their final goal for 2013.