A Second Helping of Robert Ayers vs Seattle

On Friday, we examined a fine play made by Nate Irving in run defense against the Seahawks, and promised we'd analyze the play which immediately followed. Unfortunately for Robert Ayers, what we'll find explains why he's dropped on this year’s depth chart.

I’ve supported Ayers in the past, but whether you agreed or disagreed, I could always show you why I felt that way on game film. During this training camp, Jack Del Rio talked about Ayers’s need to focus - on his play and on the things that he can control - not on those he cannot. What follows is an example of what JDR was talking about:

Seattle is facing second down with eight yards to gain, and Denver is in its base Cover 2 defensive alignment; Ayers is at the right defensive end position. Elvis Dumervil may be getting a few less reps there as the Broncos search out ways to bolster their run defense, which Ayers has always been good at. The Seahawks are in 12 personnel with the quarterback Russell Wilson under center and two tight ends on the offensive right.

You might notice that Anthony McCoy (85), who had been lined up to the offensive left in the prior play, is now the outermost tight end on an unbalanced line, making that the ‘closed’ side (open and closed have mostly replaced the terms ‘strong’ and ‘weak’). You might also notice that McCoy’s hand is too far forward, which should be a procedure penalty against Seattle. You might - the referees didn’t.

The Broncos are in formation with Ben Garland (68) shading to the open side on the center, with Sealver Siliga (98) to his left, and Jeremy Beal (93) is the left DE. The LBs are in a base alignment and the safeties in Cover 2.

At the snap, Seattle zone blocks to the offensive right, but the left tackle leaves to fire out toward the Will LB, Jerry Franklin (42). Ayers is left uncovered and waits to see if Wilson hands off (and if so, where the RB Robert Turbin (22) moves to) or rolls out.

Here’s Ayers’s dilemma: if he stays where he is, he’s potentially in the line of a pass to the X receiver (Braylon Edwards, #17), who’s cutting inward.

However - the line is moving away from him, leaving a big running lane. The left tackle ignores Ayers and is flying to the second level to block Franklin. That means either a screen (one of the things they coach you on is that if you’ve got a clear run at the QB, you’re probably being set up), a handoff that Ayers is a little too far outside to handle, or a naked bootleg. With Wilson’s athleticism, that’s a possibility. Ayers could be concerned about being caught too far inside by that, but even a body length to his left, he’d still be outside of Wilson if the bootleg is run. He’s not about to move in until he sees the ball.

With these factors being problematic, I’d expect him to maintain his distance with Garland in order to cover the run, since he’s far enough outside to pressure the bootleg if it happens. Instead, he simply holds his ground. He’s out of position for the run, and that’s exactly what Seattle is going for. The play counts on the RB beating him in isolation. 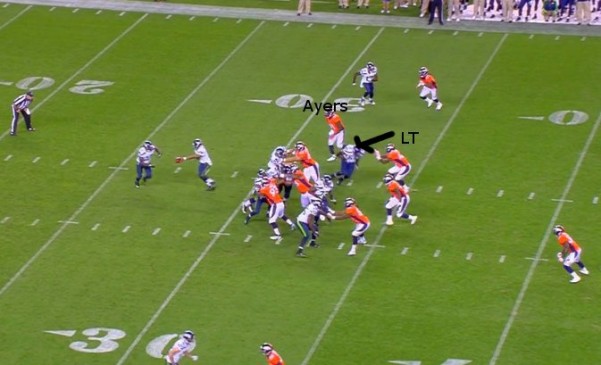 The ball goes to Turbin, and Ayers is alone on the edge. The resolution here isn’t perfect, but you can see that below that Ayers has a sightline to the ball, so he’s no longer interested in the QB. Turbin shouldn’t have a chance to go anywhere but directly at Ayers, or up the gap next to his defensive left. 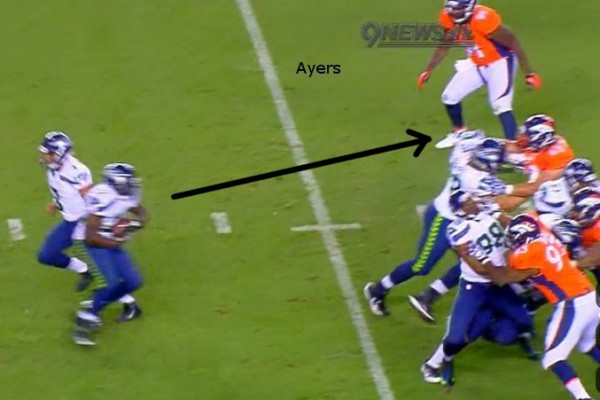 That’s where this play falls apart. Ayers doesn’t get his feet moving and doesn’t guard the gap, even though the pile is moving to the defensive left. The Broncos are fighting back and the pile comes to a halt, so there’s just the gap for Ayers to guard. And, that doesn’t happen. Turbin is fast, and Ayers is caught. 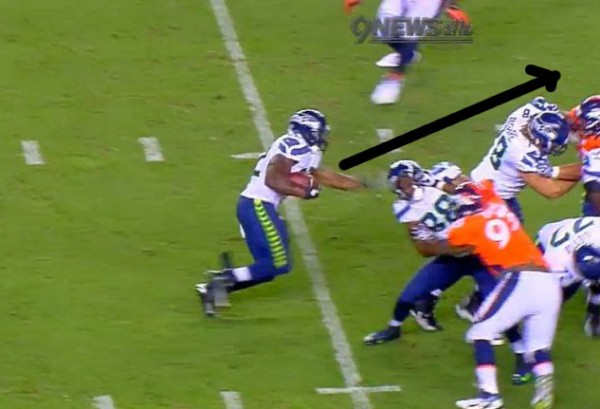 Moving back to the second camera view, it's plain to see that Ayers (you only can see his feet at the top of the previous image) is too far over. He responds a little too late and tries to cross his right foot over to get into the gap. That’s slower - or should be - than slide-stepping into that gap and at least getting a hand on the back, as Irving had done on the play before, slowing the RB to be tackled for a short gain. You can, in the screenshot below, see that David Bruton at the top of the screen is running full out to meet Turbin quickly. 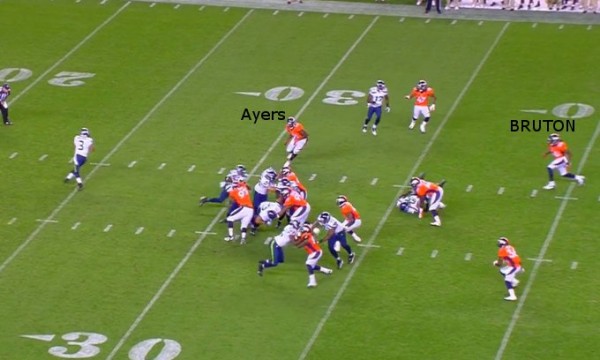 The damage is done; Turbin flys by Ayers, untouched. Bruton crashes down and makes a tough stop on Turbin head-on, who outweighs him. It’s a big hit, but Bruton uses it to bring the big back to the ground. The gain is only four yards, but if Ayers had been in better position to protect his gap, the play would have gone for nothing. As they often have in the first two games, the rest of the Broncos swarm to the ball as Bruton makes the tackle. 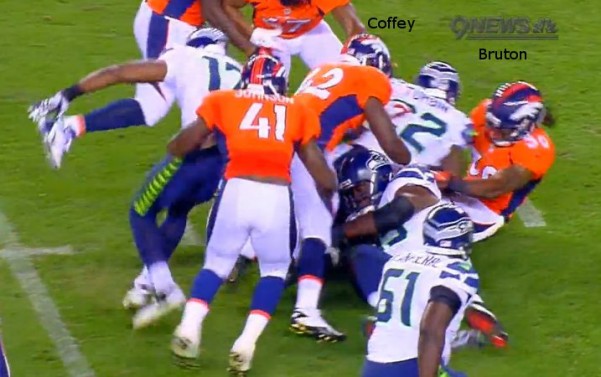 Ayers has shown better football skills in the past. I don’t know if Jason Hunter’s charge in training camp shook him, or if there’s something else in play here, but he doesn’t seem to be fully grasping his role or doing what it takes on each play. Jack Del Rio was out on the field in a linebacker’s slot on Tuesday, teaching each player exactly what their role in the defense would be. With Hunter likely done for the year, Ayers has to prove that he can step up and take over the base left defensive end job, if he's even given the chance (Derek Wolfe has been lining up at LDE in Hunter's stead, with Ayers behind Elvis Dumervil on the depth chart at RDE).

If not, Denver’s going to have one more role to fill. Jamie Blatnick has shown promise, although I’m still expecting him on the practice squad to start the season. Malik Jackson is being groomed for a DT role - either nickel or rotational - and Sealver Siliga didn’t earn my trust in this game or the first. Jackson could still be coached into a DE role if necessary. I rarely mind an athletic 295 lb DE.