A Second Helping of Manny Ramirez vs the 49ers

I really didn’t know much about Manny Ramirez until recently. That’s no shock - he was out of football entirely for much of 2010 before Denver signed him to a  future contract in January of 2011. He played in two games for Denver last year and was inactive for the other sixteen games, including playoffs.

But because Manny’s stepping in for Chris Kuper until Kupe’s forearm heals, I took a long look at his performance against San Francisco on Sunday.

Backstory: Manny was chosen by Detroit in the fourth round (117th overall) of the 2007 Draft. He appeared in one game as a rookie on special teams, then moved up to playing in four games the next year, three of them starts - two at right guard, one at left guard. He didn’t have a penalty, but gave up two sacks. The following year, things changed.

In 2009, Ramirez appeared in 13 games and started 12. Over the course of those games, he only allowed one half-sack and was called for three penalties. Sounds good, except PFF graded him at minus-16.7 overall, over 771 snaps that season; the Lions released him on October 6 of the following season.

Given his past record, I wasn’t sure what to expect when he stepped in for Kuper. What I saw on Sunday against the 49ers was a technically sound player with good size (6-3, 313 lb) and functional strength, who looked comfortable at right guard. He clearly knew his responsibilities and carried them out effectively.

On the first play of the game, Ramirez is on the closed side (tight end Joel Dreessen is at his end of the line) of an 11 formation. Peyton Manning is in the shotgun, and Willis McGahee is lined up on the open side, just behind and diagonal to Manning. The 49ers have an even front defense in place with the open side defensive end lined up to the outside. 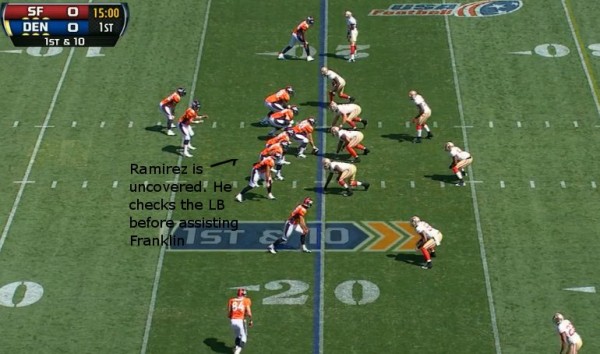 On the snap, Ramirez is uncovered (ie, no one is lined up directly across from him), so he first checks for delayed blitzers and then helps tackle Orlando Franklin with the left defensive end, Ray McDonald (91). It’s a completion to Dreessen for 11 yards. Standard play, but a good assist. The pass went for a first down. 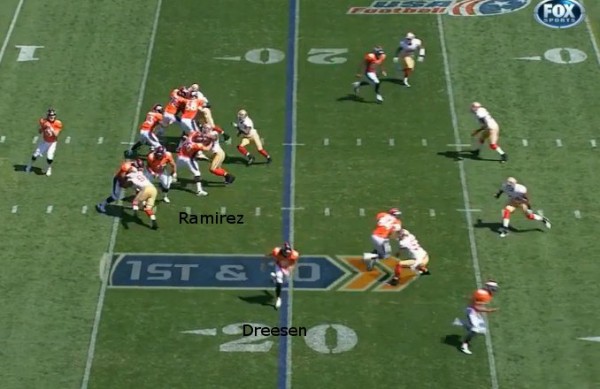 Ramirez did well in pass protection - as well as Kuper usually does. He also added a decent drive block on the second play of the game, among others: his run blocking was solid all day.

As an example, on the third play of the game (2nd and 8), Denver is in a 21 formation with Chris Gronkowski in a split wing position behind the line. Dreessen motions from the offensive right to left, and then back again. McGahee is back behind Manning, who’s under center.

The 49ers are in a 5-2 formation this time, with three down linemen and two additional players standing on the ends. Both of Denver’s guards are uncovered - i.e., there’s no one directly in front of them.

As Dreessen returns to his position on the end of the line, the ball is snapped. Both Zane Beadles and Ramirez fire out and into the second level. McGahee follows Gronkowski during his run to the right of center J.D. Walton, who helps with a nice block at the line of scrimmage. The tackles also lock into their targets. 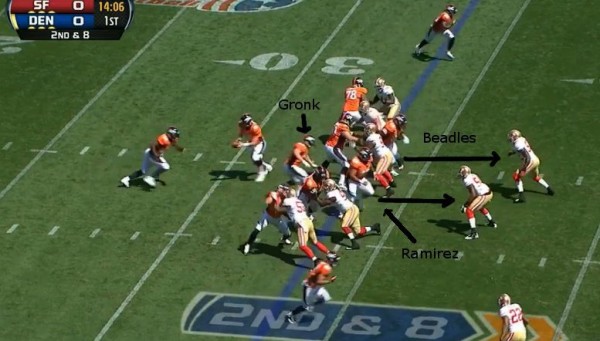 Beadles and Ramirez engage their men and turn them away from the inside (center side). Franklin, Dreessen, and Ryan Clady have their targets controlled, and Gronk uses his body and walls off his man. McGahee’s a very good runner, but this one’s handed to him. All seven blocking Broncos are letter-perfect. 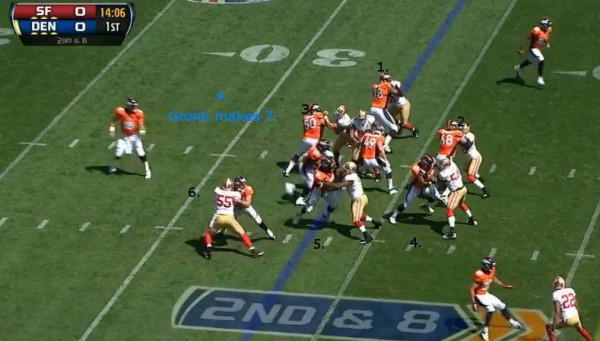 It’s an easy first down, going for a gain of twelve yards. 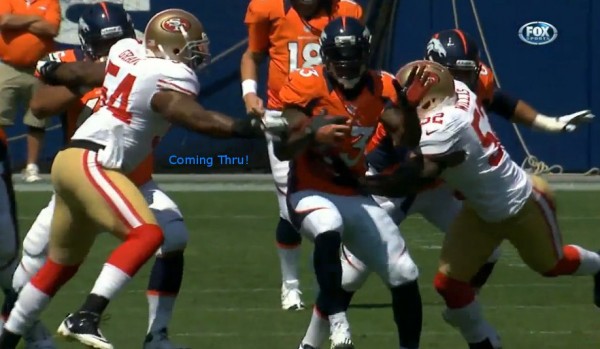 Ramirez can play either guard slot - and even center) and he showed nothing but good technique through his time in Sunday’s game. In fact, he was either in on or created four knockdowns that I saw in the first quarter alone. It was a game in which Denver was imposing its will, but when your OL is plugging defensive players into the turf like daffodil bulbs, imposing your will gets much easier.

He’s not suited for tackle - where Chris Clark is the swing backup tackle - but as a stand-in for starter Chris Kuper, who’s reKuperating from a broken forearm that required surgery, Ramirez looks more than capable. He’s gotten plenty of reps in training camp and seems to communicate well with the other OL players.

We’ve been talking about depth a lot recently. Watching Manny Ramirez step up in this quality fashion leaves me a lot more comfortable than I had been before this game. Ramirez is another guy who was taken in by the Broncos and coached up, getting him ready to contribute when he was called upon. It’s what the better teams do.

Pass protection, drive blocking on a run play, and firing to the second level to control the linebacker’s chance to stop McGahee, all were displayed on just the first three downs. Both Beadles and Ramirez demonstrated the same kind of fast, effective blocks on this one. Kudos to both of them.

Seeing this kind of depth - and seeing the effectiveness of the OL with Manny on the first quarter drives - has left me satisfied that I’ve seen as much as a preseason game can offer. Ramirez continued that level of performance throughout the Broncos' first-quarter offensive explosion of the first quarter, dominating the defensive line far more often than not. So far, he’s given me nothing but good things to tell about his work potential until Kuper returns.