A Second Helping of Jeremy Beal vs the Bears

My previous two looks at the Broncos' preseason-opening win over the Bears covered big plays from rookies Danny Trevathan and Steven Johnson. You could easily see how the design of each play facilitated their success - provided the linebackers were alert, quick, and effective enough. They were, and if those are the backups, it could be a fun year.

For our next analysis, I’d like to take on a similar play that was successful due to the pure effort of one player - defensive end Jeremy Beal.

A disappointing Combine dropped Jeremy to the seventh round of the 2011 Draft, and Denver's depth at the position relegated the former Sooner to the practice squad last year.

Of course, he's still stuck behind Elvis Dumervil and Robert Ayers, and Von Miller slides over to a DE function on most passing/nickel downs. Jason Hunter was threatening to think people into the corn fields until he tore his triceps, and now Derek Wolfe is at Hunter’s position - Beal’s task in making the squad isn’t easy, but just improved.

He might make it this year, he might not. He could end up doing another year on the PS and then try to take a job the way Hunter was doing - by coming to OTAs and camp in the best shape of his life, and with the attitude that no one is going to take that job away from him. Anyone who wanted to see that Jeremy had developed since being drafted had only to watch last Thursday's game.

Beal’s downside is simple - he was a remarkably productive DE in college, but his timed speed isn’t impressive, and his explosion off the line has been criticized. The other side of that coin is that he’s one powerful man with excellent hand-fighting techniques - ‘violent hands’, as Cecil Lammey put it - and a habit of living in opposing backfields. Hand fighting, explosion, and leverage are the three standard keys to pass rushing. Beal showed exactly how they work in the fourth quarter, with Matt Blanchard trying to muster an offense for the Bears.

There is 7:40 left to go, Denver is up 24-3, and Steven Johnson has just nailed Blanchard to the soggy Soldier Field turf for the Broncos' fifth sack of the game. Blanchard has his team in the same three-wide receiver Posse formation as he did on the last play, with running back Lorenzo Booker to his front and to his left, directly behind left tackle James Brown. Blanchard is in a shotgun. 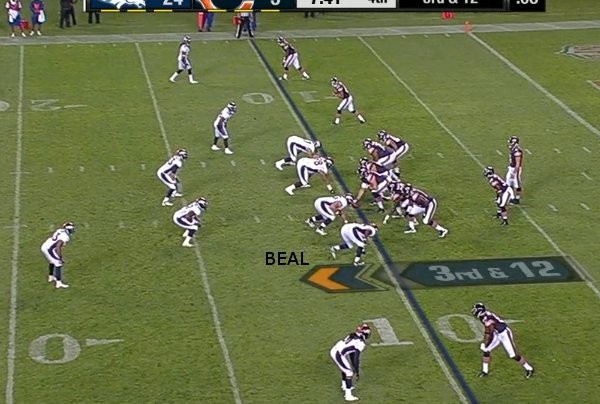 Normally you’d see the defense in a nickel formation in this situation, but this is pure vanilla preseason, and Denver is in a standard, balanced base with their four defensive linemen spread out evenly, the DTs over the guards, and the DEs shaded outside the tackles.

Denver’s three linebackers are spread out behind the line with the Sam up slightly. They have one safety deep, but the other, Anthony Perkins (43), is cheating up. He and all of the linebackers break back into coverage at the snap; the edge corners are in tight man coverage. The rain, which had fallen more often than not during the game, is coming down in silver sheets under the stadium lights.

Look at a different shot of the presnap alignment that helps see the RB and LT against Beal more clearly. It’s going to matter. The RB is directly behind the LT and will be chipping on the outside on Beal: 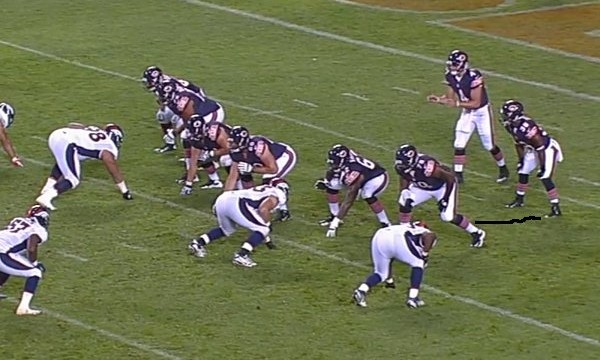 At the snap, running back Lorenzo Booker (38) breaks to the left. He chips on Beal, and rookie left tackle James Brown drops from his two-point stance into a pass-blocking posture, fixed on Beal. Brown makes a fatal mistake - he takes too wide outside a position, given that Booker’s chip block is aimed at Beal’s outside shoulder and should give him a push to the inside.

The chip block is done well - Booker gets up under Beal’s pads from the left and does affect his rush, but Jeremy instinctively uses the momentum it provided to power himself into an inside spin move that put him inside of Brown, with Booker already out of the picture. Beal takes the RB’s power and turns it into an advantage for himself. It’s also a classic aikijutsu approach. 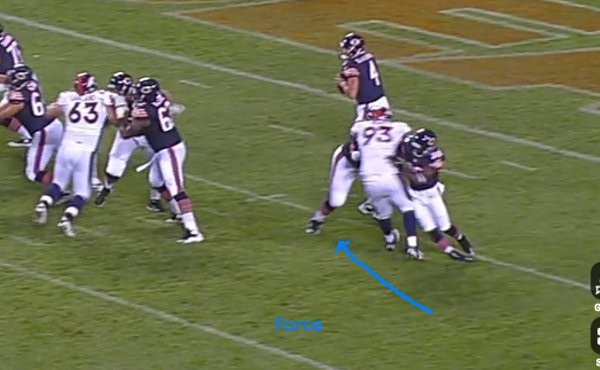 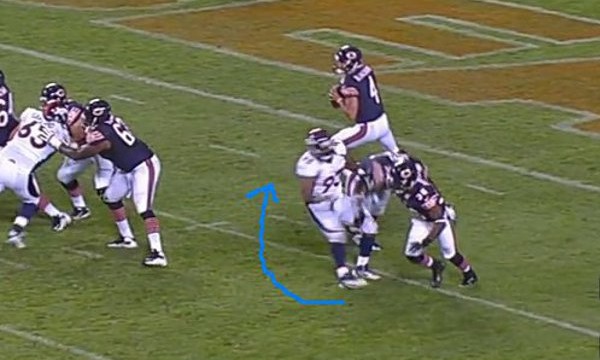 Brown, a rookie, is caught totally off guard by Beal’s move and slips when he tries - although too late anyway - to recover his position. The path to the QB is now open, and Beal’s feet aren’t having trouble keeping traction.. 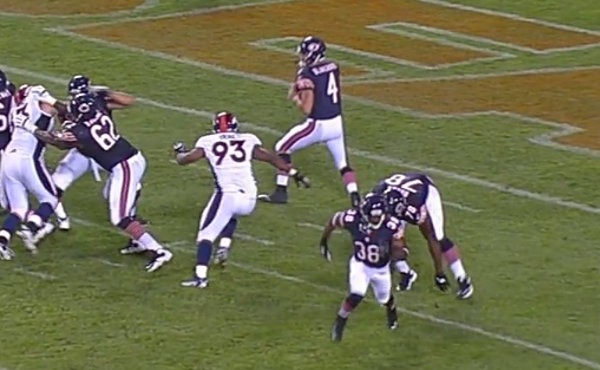 At this point, Blanchard is supposed to be throwing to Booker as his outlet man, but his back is to his RB, he can’t see the development, and Beal is bearing down on him fast. When Blanchard finally realizes the danger, he tries to break to the right, but whatever his timed 40, Beal has a great burst in that small area and Blanchard goes down at the two-yard line. Take a bow, Jeremy. 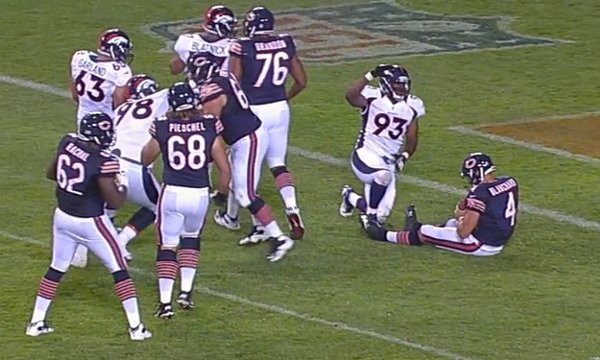 It's the Broncos' sixth sack of the night, and, mercifully, their last.

Beal is a very fine young player. He’s noticeably bigger this year, fulfilling John Fox’s comment that it often takes a year just to build an NFL body. He’s fighting for a crowded position, but there are still three preseason games to go. He’s going against top competition, but top competition builds top teams, and injuries happen - camp depth can suddenly be needed. Jason Hunter’s triceps surgery both reminded of that and improved Beal’s shot at a roster position.

Whether this camp or next, Jeremy Beal is a player who’s well worth watching.