A Second Helping of Elvis Dumervil vs San Francisco

Jack Del Rio has made no bones about it - he wants to increase the defense’s pressure on opposing offensive lines.

That pressure will affect the passing game by sacking, hurrying, and harassing the quarterback, making the job of the secondary easier. It also affects the run game, creating more tackles for loss, and more hits and tackles made at or near the line of scrimmage. Even in the simplified world of preseason football, the approaches Denver will take showed glimpses of themselves.

For a prime example, let's review a sack from two weeks ago by Elvis Dumervil against the 49ers and QB Alex Smith.

With 10:36 to go in the first quarter, the 49ers are down 3-0 and facing third and six - a tough down to achieve - and usually an obvious passing down. The 49ers are in a shotgun 11 formation with three wideouts, and Frank Gore alongside quarterback Alex Smith in the backfield.

The Broncos respond by putting Chris Harris in at nickelback and Derek Wolfe at the off tackle/left defensive end position: Mitch Unrein is at nose and lines up in the B gap between the guard and tackle. Joe Mays and Wesley Woodyard are in along with Von Miller at linebacker, Miller lined up over the right tackle.

Doom is taking an outside lane, so the linebackers are responsible if it’s a draw or other run up the middle. 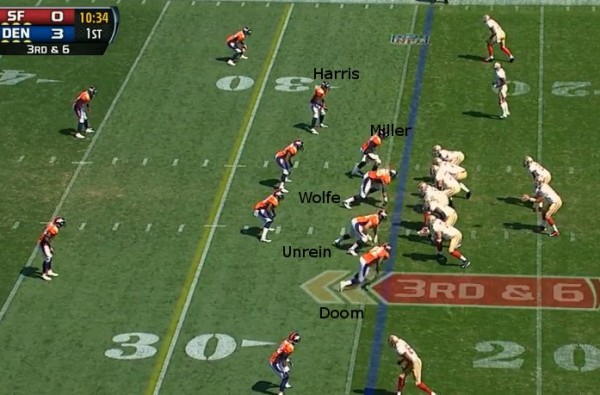 At the snap, the LT Joe Staley (74) tries to use a cut block on Doom. His technique is good - he starts with his left leg well back, presnap, to make it easier to turn towards Elvis. As the ball is snapped, he opens his hips by turning toward the sideline. 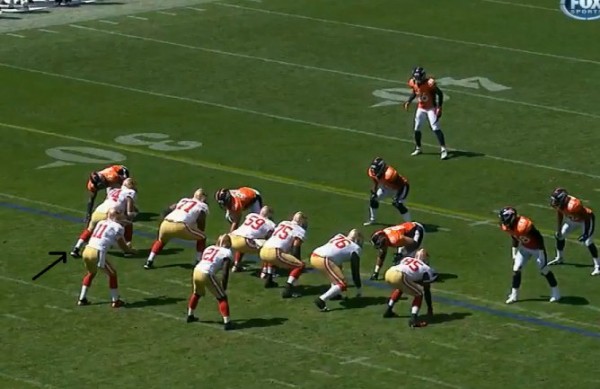 Staley flings his right arm around to the left, and thrusts his left elbow back to spin his body faster, in hopes of countering Doom’s quick explosion. He immediately throws his body at Dumervil’s knees, with his right arm extended.

Elvis reacts instinctively - he’s seen this before. He has his left foot up, so there’s no weight on the leg Staley grazes (which might unbalance him were it planted), and Doom puts his left hand on Staley’s body - like a short fence that he’s about to hop over. He easily avoids the block, barely breaking stride as he leaves Joe in the dirt and shoots after the QB. 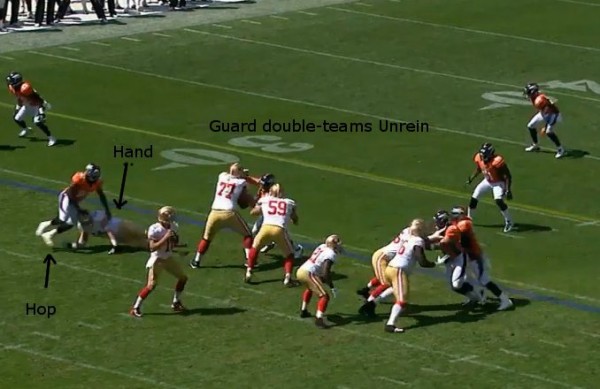 The 49ers do everything right - it’s a good technique by Staley - followed by the guard, Mike Iupati (77, who’s been double-teaming Unrein), spotting the situation and reacting. He breaks off, coming back to cut Doom off. But Dumervil has great ‘burst’ - short area speed - and he flushes Smith out of what should be his pocket. Joe Mays sees this unfolding and does what he does best - he runs downhill to make the tackle.

Von Miller tries to stunt inside but is caught by Alex Boone (75) and Frank Gore (21) - they'd seen him coming.

But, that doesn’t matter.

If you double team Miller, you’re exposed to Doom. If you double team both, the Wolfeman snacks on the QB. All of that assumes that Mays and/or Woodyard don’t blitz up the A gap. Jack Del Rio likes to be able to pressure with just four guys - which is why the Broncos drafted Derek Wolfe, and so highly - but he’s also not shy about blitzing when it’s right.

Here’s the magic act - Wolfe beats his man to try and get in on it, Joe Mays takes one step and has his leg forward on the second, but Doom has already left Iupati far behind and has wrapped up Smith, who’s falling. Never mind the stopwatch and the 40-yard dashes - in the short area, Elvis is incredibly fast.

Fast off the line, fast to the quarterback. 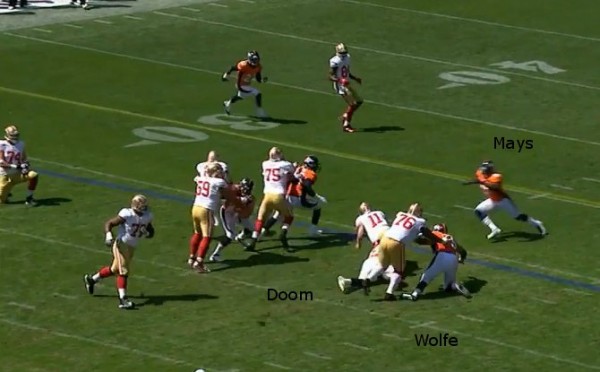 A quick note of explanation: The 49ers begin the play by sending out Vernon Davis (85) from the tight end/slot position, hoping to draw off Miller, since Chris Harris is already engaged. No luck there - Miller ignores it and stunts. The right tackle and guard triy to double-team Wolfe, but Miller’s stunt pulls the guard away.

The center, Jonathan Goodwin (59), wants to help on the left guard’s double-team on Unrein, but instead ends up solo on Unrein, with Iupati trying to slow Doom. SF tries to do all the right things, but it comes down to one-on-one battles for who gets the job done.

If it sounds complex, it is, in degree.

That is going to be Broncos 101 for the 2012 season, too - good luck stopping them all off the line, all game long.

Sure, it was only preseason, and things were still vanilla. They’ll get harder. Wolfe, for example, has said that he’d seen some new things again in that game. He’s going to have a steep learning curve on OL tricks and tactics this season - he clearly learns fast, but things still take time. He’s strong, but he’s also a technician, and he’ll have to pick up new things as he goes. He will.

With Unrein having picked up his game, Wolfe’s innate skill and constant effort to perfect his technique, Miller’s outrageous speed and growing strength, and Dumervil’s power, burst and skill, this is the first year in recent memory that I believe the Broncos have a realistic shot at a sack or tackle for loss on nearly every play. They won’t score a loss on all of them, but I can’t wait to see how many they end up with.

This play shows exactly why.