A Second Helping of Derek Wolfe vs the Steelers

Like a lot of folks, I tend to spend what time I have to watch television on things like programs on nature, astronomy, history, et cetera.

I recently caught a program that dealt with wolves, and found that they’re remarkable animals. They live in a complex society: they have a clear social hierarchy, an extensive symbolic language, and are beautiful to watch. Wolves generally hunt in packs - they work synergistically with each other to bring down prey quickly and safely (for them).

Wolves also commonly attack their prey from behind, jumping on their backs to bring them down or hamstringing them to prevent them from getting away before the full pack attacks.

Broncos defensive lineman Derek Wolfe may have seen the same program. No question, he lived much of it Week 1 against Pittsburgh; his impact on the game was first demonstrated with 9:42 remaining in the first quarter Sunday night.

The Steelers are backed up to their own six-yard line and are facing 2nd and 15. They have one receiver in the X position, and three receivers on the other end of the line, including the fullback, Will Johnson. Isaac Redman is in the backfield along with Ben Roethlisberger.

The Broncos counter with an over formation, with Derek Wolfe at the left defensive end, and Ty Warren, Justin Bannan, and Elvis Dumervil along the front. From the bunched receivers on the offensive right end of the line, Will Johnson comes in motion as far as the center and then turns and settles in a split-wing position. 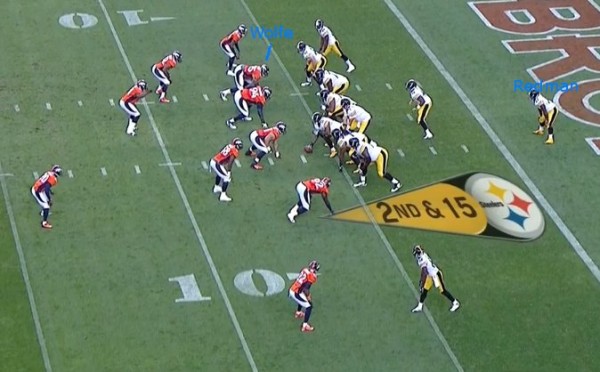 Roethlisberger is under center, and when he takes the snap, Derek Wolfe fires out into the right tackle, Marcus Gilbert (77). Gilbert rides Wolfe out of the play back to the goal line, where Roethlisberger has just handed off to Redman. As Redman moved forward, he runs into the back of his own offensive lineman, Ramon Foster (73). 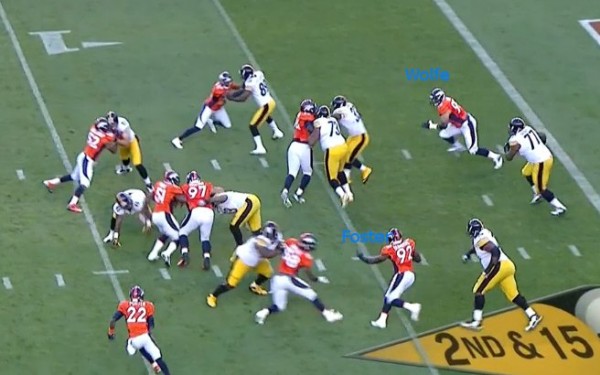 Foster is wrestling with Ty Warren, and Redman, who is trying to run outside, hesitates for an instant. In that moment, Wolfe disengages from the right tackle and flings himself forward. He catches Redman from behind and slams him into the turf for no gain on the play. 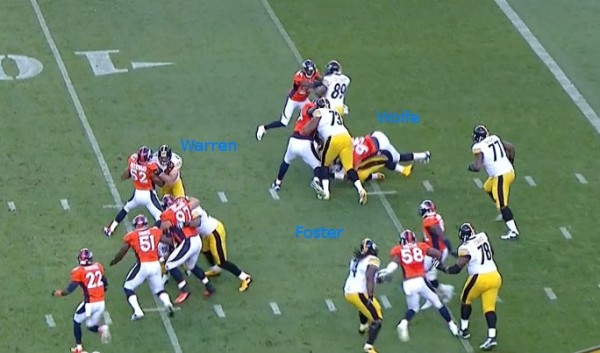 As impressive as that play is, it is only a prelude to that which is to come.

Later in the quarter, with 3 minutes and 35 seconds to go, Pittsburgh is dealing with a third down and 13 yards to go, with the ball at the Denver 36. They are in an 11 formation: Heath Miller is behind and to the right of Marcus Gilbert, and Roethlisberger is in the shotgun with Redman on the open side.

The Broncos are in their balanced formation, with Derek Wolfe at off tackle and Von Miller standing in his usual left defensive end slot. 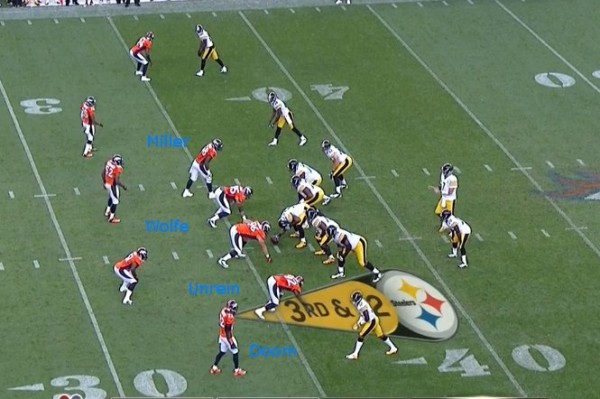 At the snap, Wolfe fires into Ramon Foster, the right guard. You might want to notice, in the image below, the way that Wolfe has his hands up: he is prepared to control Foster's hands or to disengage. Notice also that the center, Maurkice Pouncey (53), stands ready to help out on the block: 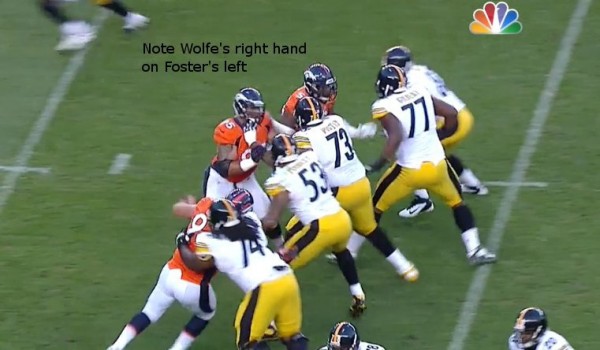 Now, look at Mitch Unrein (96). He is driving across, in addition to being pushed from behind by Willie Colon (74). You can see that his right hand is out and is about to shove Pouncey farther away from the play.

Derek Wolfe is using the opportunity to disengage himself and to let the scrum that Unrein has created pass him by. Unrein’s maneuver plus Colon’s inadvertent contribution has created an obstacle to blocking Wolfe, and Wolfe is letting it push past him. 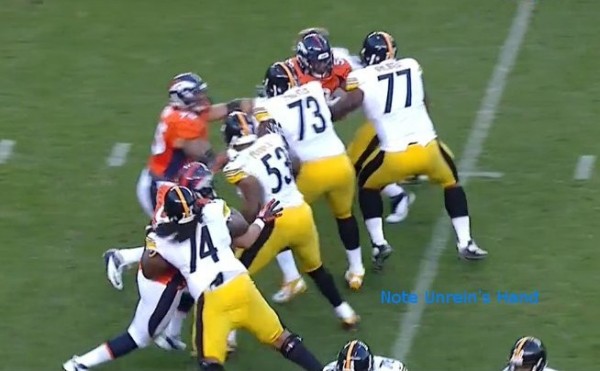 Wolfe now charges up the vacant lane into Ben’s pocket.

Colon makes a desperate grab for him, but to no avail. Ben Roethlisberger is very hard to bring down, yet somehow Wolfe gets him around the ankles and Big Ben comes crashing to the ground. 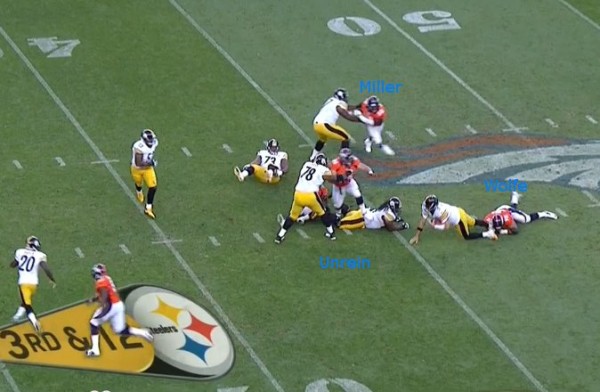 How important is Unrein’s maneuver on this sack? Wolfe says Unrein, “did a great job of picking the center” and allowed the rookie to “come around free.”

In part, Wolfe is being modest - if he doesn’t have his head on a swivel on both plays, he doesn’t see Redman’s hesitation in the first play, or the spot to knife into the lane to Roethlisberger on the second. He also uses some nice hand fighting in the course of the second play. He then lets out a Wolfe Howl for the sack: 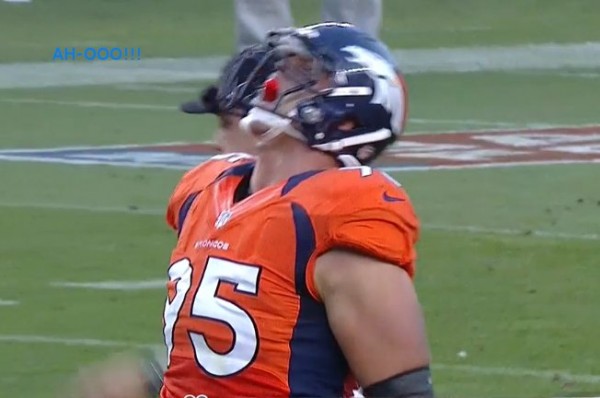 These are by no means the only plays that I found Wolfe to have an impact on - just a couple that show his ability to play from multiple positions, his level of awareness of the play around him, and his tenacity and refusal to give up. Couple that tenacity with the level of technique that he has (and is developing more greatly each week), and you’ve got a young player who’s quickly going to become well known around the league.

Wolfe ended the game with three solo tackles, a nine-yard loss on the sack, and a hurry. And Derek is right - Unrein deserves a lot of credit. The two of them are becoming an excellent fighting team. Unrein only got credit for one assist on the game, but this is one of the many times that the stats tell only a small part of the story.

Wolfe couldn’t have gotten that sack without Mitch.