A Second Helping of Derek Wolfe against the Browns

I’ve been an unabashed supporter of Derek Wolfe for quite some time now - I like his game. It might be easy to forget that I’ve also listed the concerns that I’ve had with his play, starting prior to the draft:

The first problem that I noticed with Wolfe was that oddly, despite his substantial college production and decent test times, he looked somewhat slower in the drills. He lacks some of the lower body development that I thought I’d see, based on the games I'd watched. Explosion, particularly on his first step, seemingly isn’t his forte, which is odd. I’ve seen him blow past an OL player, and I’ve seen him pretty much standing still when they got their hands into him, and I’m not sure which is the real Wolfe - probably both of them. He has several decent pass-rushing moves, including a nice rip move, and that’s not common among college players, but he also forgets how to use his hands and arms on other plays. That was true in the few games that I saw him - hardly enough for a full scouting report, but it matched well enough to those I have.

He cannot smoothly handle a double team and will often end up on the ground when faced with those - you can help him out schematically in degree, but that’s a problem at the next level. It’s back to his lack of good lower body strength and a resulting inability to anchor: his balance and ability to use leverage also play into that.

I’ve seen evidence of those pre-draft concerns at times this year, but I’ve also seen them diminishing.

The day after Wolfe's selection by Denver, I added,

We might not know how good this pick was for a couple of years. That’s the chance you take, and I know that people will say that this means that you go with a higher rated player. I don’t buy that. You identify the guy you think has the best chance of filling a role you see as essential.

That role is as an interior pass-rusher who can also handle the run on both the edge and the interior.

As Ted pointed out recently, Wolfe is playing more of a 3-4-type DE role for Denver; he tends to absorb blockers and free up the attack players - Wesley Woodyard (5.5 sacks), Von Miller 17.5 sacks, a new franchise record, and six forced fumbles) and Elvis Dumervil (11 sacks, six forced fumbles) - to wreak havoc in the backfield. The fact is, Wolfe has five sacks of his own now, after having notched one in each of the last two games. His role hasn’t kept him from being productive. I’m also seeing his development, game to game. His hard work ethic is paying off.

Some people point out that he’s ‘just’ an effort player. When that became a downside is beyond me, but it’s something that I read or hear at times. That effort mostly goes into learning NFL technique, which isn’t an instantaneous process. His role has encompassed RDE, LDE, DT, and NT in both odd and even fronts, so there’s a lot to learn about the techniques that are necessary at each.

With that in mind, I’d like to point out a play that I thought pretty much defined his year. It came last Sunday against Cleveland, in the second quarter with 7:58 left to play.

Wolfe is in a three-point stance as one of three down lineman in a variation on the old Okie 5-2 defensive look (Jack Del Rio’s creativity has been a constant pleasure to watch this year). Wolfe is noted on the screenshot - he’s next to Miller, who’s in a two-point stance. 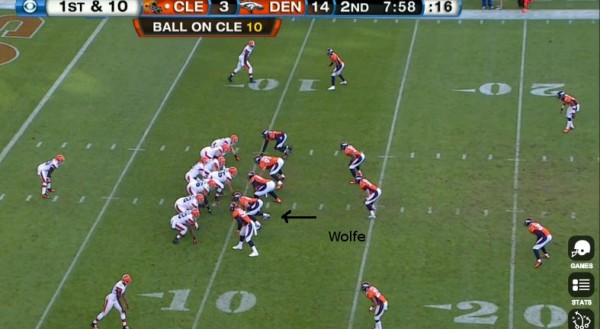 Cleveland is in 12 personnel, using two TEs in what’s generally either a max protect or a power run formation; they're going with a run here.

At the snap, Wolfe fires inward - you can see that he’s slightly deeper than the other Denver linemen, so he gets a fast first step this time. He also gets his hands inside of the right tackle’s. In turn, he’s attacked by RT Mitchell Schwartz.

Brandon Weeden (3) is still functional at this point, and he’s handing off to Montario Hardesty (20). The WRs aren’t running their routes, so the Denver D knows that it’s a run and is responding accordingly: 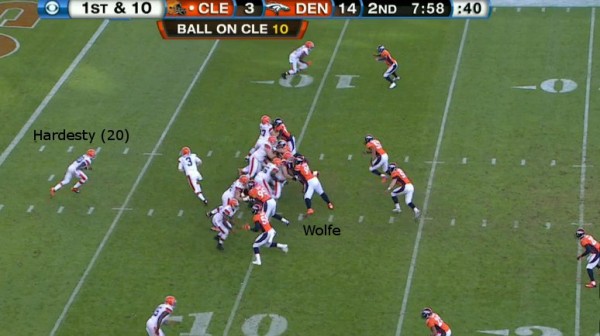 In this next shot, notice that Schwartz has Wolfe (95) by the jersey outside his shoulder pads, which is an illegal hold. It won’t be called. Wolfe has opened his hips toward the run play and is making his way quickly down the line, while Hardesty looks for a gap.

Kevin Vickerson has been driven back by a double team, and it’s blocking the route of Keith Brooking to Hardesty. Wesley Woodyard, at the top, is also being held. Miller has lost ground. Wolfe, though, now has carried Schwartz nearly into Hardesty’s intended hole. Denver’s gap discipline is still good. There’s only a small hole for Hardesty to spring through, and Schwartz, if you look carefully, is about to fall backwards into it. 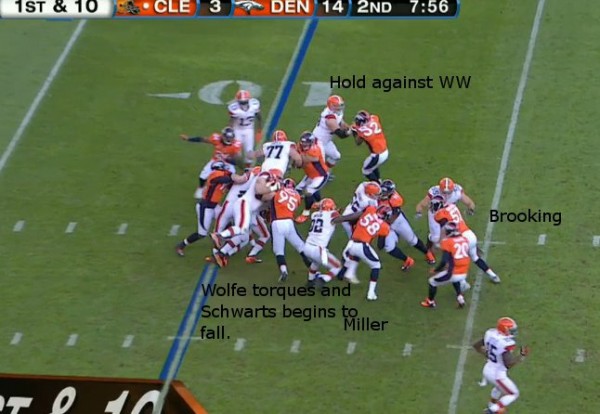 Wolfe torques his body, and Schwartz has nowhere to go but down. He’s going to land in Hardesty’s intended gap, making the RB hunch over and change his route a bit more to the outside. It doesn’t really matter if he does - he’s got almost nothing to work with. Schwartz maintains his hold, but Wolfe has his right arm free to hamper the RB.

Woodyard is breaking free of his hold, while Justin Bannan has held his gap well - those two are in position to make the stop. Wolfe would be making the tackle if not for the holding, but his play is making Hardesty move toward Bannan and WW.

That’s Champ Bailey just above Doom, and he’s gotten free of the (half-hearted) blocking by his WR, and is in backside pursuit. It’s about to matter. 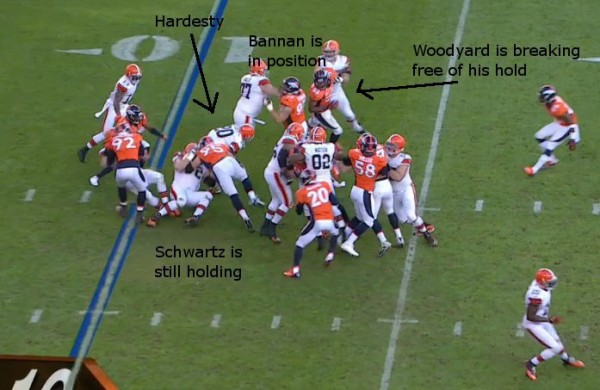 The play ends quickly. Bannan has maintained his position, Hardesty has had to adjust his run to the right, towards Bannan, and Woodyard is ready to mop up if there’s an issue. Rahim Moore is at the far right above, coming in to make sure there are no complications. He’s been excellent in that role this year.

See that blur in the next shot, in mid-air and aimed at Hardesty? It’s Champ Bailey, who has since set a new record for DBs making Pro Bowls. This is one of the parts that only coaches, players, and well-informed fans catch - Champ’s run-stopping work is constantly effective. 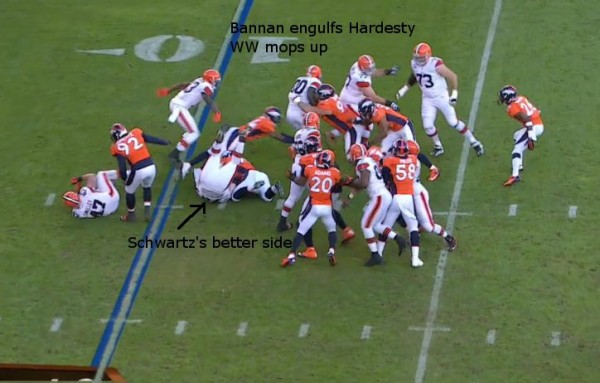 I’m going to add one more screenshot - it gives a great picture of what’s happening just before the tackle. Bannan holds his gap, Woodyard is getting free of the other uncalled hold, and Champ is attacking from the back, while Wolfe narrows the gap by dumping Schwartz on his duff. Essentially, Hardesty is being penned in on all four sides. He does well just to get three yards out of it. 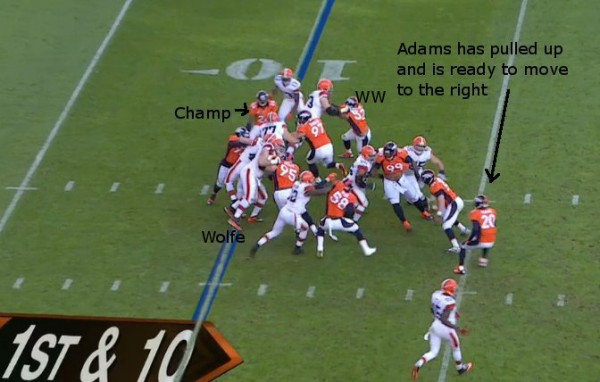 Wolfe won’t get a stat out of it, but when you look at what he does on this play, it’s one of the pieces that is crucial in creating the stop. Schwartz, by the way, is 6-5 and 320 - he outweighs Wolfe by 20 lb, maintains an illegal hold on him, and Wolfe still has the power to throw him to the ground, essentially with just one arm and the torque of his torso. Wolfe’s trying to keep his play-side (right) arm free to hamper Hardesty. That’s very good technique.

I’ve never suggested that Wolfe is without weaknesses - in fact, I mentioned quite a few early on. I do think that he’s underrated as Pro Football Focus's grades go, but that’s not a swing at PFF. They can’t factor in all the schematic issues, and Wolfe’s role in the defense isn’t always going to produce stats, either.

He does a lot of the grunt work, as Jack Del Rio, Doom and Von Miller, among others, have mentioned. Justin Bannan has commented on the number of positions that Wolfe has learned (or been exposed to) and how uncommon that is for a rookie. It will bear fruit down the road. Wolfe also has been in on the field for over 84% of the team's defensive plays - 896 snaps this year - which says a lot.

All in all, he’s doing a very good job. It may not always show up in the stats, but Wolfe’s power has increased; he’s increased his weight with muscle, and he’s commented that when he loses a battle, it’s due to losing his technique. That’s a major understanding for a rookie - with the kind of work ethic that the former powerlifter has, it’s the key to his improvement.

There are a lot of very good young players on the Denver defense - Rahim Moore, Chris Harris, Tony Carter, Danny Trevathan, and Mitch Unrein, among others. Wolfe is on that list, and Denver has needed a tough, rugged DT for years now. He’s been a good pick who wil get better.

Now we’ll get to see how he handles playoff ball.