A Second Helping of Denver’s run game at Kansas City

The Broncos celebrated the first day of December with a brilliant come-from-behind 35-28 victory over the Chiefs, and now control the AFCW and their own destiny for playoff seeding.

After customarily deferring possession on the opening kickoff, Denver had to weather KC's emotional level of play in the first half, falling behind 21-7, but getting to within a touchdown late in the second quarter.

They went three-and-out on their next series, but starting with the second-half kickoff, the Broncos sucked the life out of Arrowhead with three consecutive long touchdown drives - of 80, 92, and 95 yards.

We'll focus today on that first possession of the third quarter.

Montee Ball's 13-yard run is executed so well that it's like viewing a good example of Lombardi's legendary Power Sweep. Vince used to give seminars on the play - devoting six hours just to the function and reads of the pulling guard. Oh, to be a fly on that wall.

At times I've loaded up this eight-part lecture by Alex Gibbs and listened until my ears bled - I imagine the experience was similar listening to Vince. What both Gibbs and Lombardi have taught is that when you’ve got every footstep, hand movement, angle, read, and possibility covered, there’s not a lot that the defense can really do.

This was that exactly kind of play.

Presnap, the Broncos are in their standard 11 personnel with one running back, three wide receivers, and one tight end. Safety Eric Berry is shaded to the outside over Virgil Green, who’s on the offensive right (making that the strong/closed side). 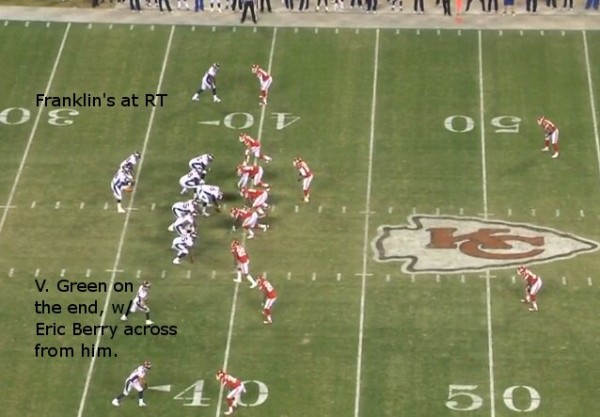 Chris Clark takes on Tamba Hali (91), while Beadles takes a ‘bucket step’ (one to the rear) in preparation to pull as the lead blocker. You can see that his shoulders are tilted towards the direction he’s pulling, so if a linebacker has the left guard as his read, it will tip him as to where the play’s going.

Vasquez and Franklin work together to block Allen Bailey (97); Franklin is blocking down on him, while Vasquez takes control of him by the inside (closer to the center) numbers. Vasquez and Franklin are performing a ‘combination block’ - when Franklin can feel that Vasquez has Bailey under control, he moves to the next defender, this time at the second level.

Ramirez is tasked with taking on Dontari Poe (92) one on one, and although Poe drives in low, Manny stands him up up very well (as he did nearly all day). Manny gives up 15 lb. to Poe, whose hand strength is extraordinary, but Ramirez does a fine job against him, even when playing him solo. 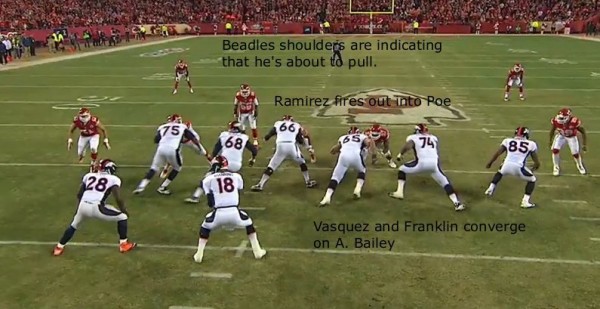 Virgil Green has Berry to contend with, coming in from a wide angle. Berry is one of the Chiefs' best defenders, and he played extremely well all day - Peyton Manning commented after the game on the problems it created - but Green handles him well here.

Virgil uses a ‘post’ maneuver on his block: he gets his hands up and inside, allowing him to lift Berry up and to the rear, and Green keeps his feet moving just enough. Look at the angle of Green‘s back, and how he’s ‘buttressing’ Berry, which eliminates the safety's leverage and strength. It only takes moving the defender three inches back or upward to control him.

Green then turns Berry as if you’d open a gate, keeping his body between the runner and the defender, effectively removing him from the play. Beadles is running along the back of the LOS to the right side of the line. This wasn’t Beadles’ best game by a longshot, but you couldn’t prove it on this play. 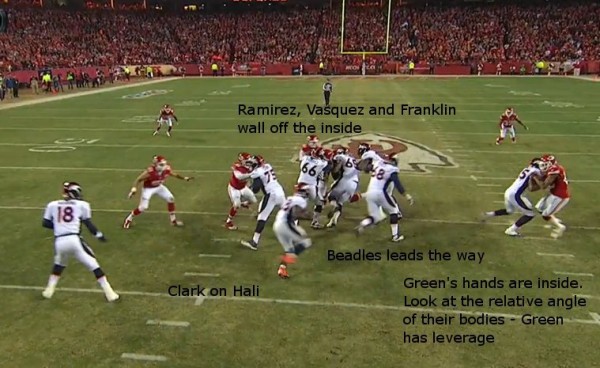 Franklin can feel Vasquez taking over Bailey, so he leaves and attacks the second level, engaging Derrick Johnson (56) and taking him out of the play. Notice that both Wes Welker and Eric Decker are engaging their defenders, while Demaryius Thomas is coming all the way across from the far offensive left. Everyone in white is getting up on their assignments, which is what makes this play really work. 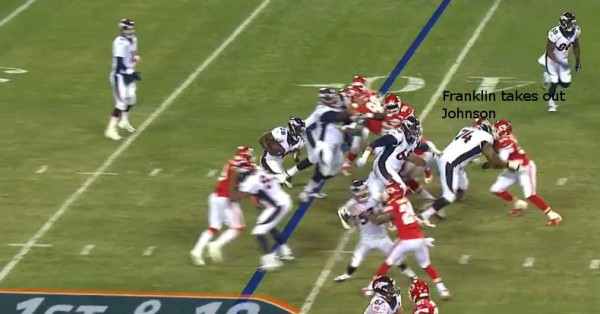 Ball is following in Beadles’ tracks, pounding up the middle where odd front defenses are often vulnerable to just this kind of play. Zane steamrollers over Husain Abdullah (39), getting Ball nearly to the first-down marker before Brandon Flowers (24) releases from Welker to bring Ball down - yet not before Ball’s power drags them both well over the line to gain. Demaryius has hustled over and is aiming at Quintin Demps (35), just in case Ball gets past Flowers and Hali.

Notice below that Thomas, bad shoulder and all, has crossed the entire field, found a man, and is still blocking Demps, his back to the play and unable to see that Ball is already going down. I mention this because having an injured WR still looking for a safety to block at the end of a running play is indicative of the aggressive mindset that lets the Broncos take over a game on the road, after having trailed by 14 points in one of the toughest stadiums in the NFL.

Notice also that Franklin is still keeping his body between his man and the runner, not letting up until the whistle sounds. That’s essential to winning too - you never let up until the ref blows the play dead. 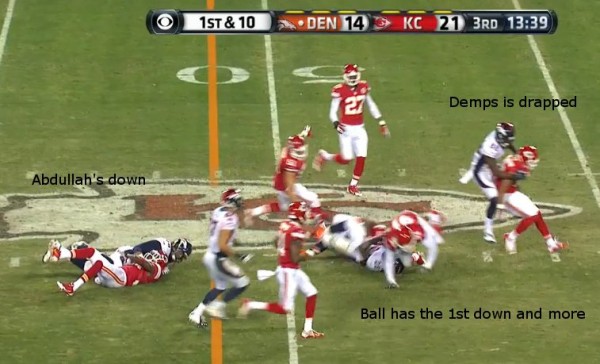 Congratulations to Montee Ball, who racked up his first 100-yard game, with a final tally of 13 attempts and 117 yards (9.0 average), plus a four-yard reception. He didn’t fumble, didn’t hesitate, and he showed off the hard stiff arm, quick feet, tackle-breaking power, and instant decision-making that he did at Wisconsin. Ball has been tutored by running backs coach Eric Studesville, Peyton Manning, and Knowshon Moreno - which isn’t a bad way to break into the pro game.

Knowshon added only 18 yards on 15 attempts this game, but he gained 72 yards receiving, including a touchdown. With the long season beginning to wear on Moreno, the emergence of Ball as a legitimate #2 back may allow him to take some of the load off of Moreno and add yet another weapon for Denver that the defense cannot ignore.

In summary, these are some of the achievements and principles Denver put together on this play:

It was just one game, but it was a divisional contest with the AFCW crown and playoff seeding on the line. Injuries were wreaking havoc with the defensive line and secondary, while Wesley Woodyard was among those still fighting his own discomfort. Standing up to and overcoming that kind of adversity is the kind of big game, big play experience that the Broncos will need to achieve their true goal for this season.

It’s plays like this that can get them there.