The Broncos' offensive line play has been incredible this year, and it's a big reason the team was able to dispatch with the Chargers and Patriots with relative ease.

Peyton Manning’s lightning release (2.36 seconds on average, according to PFF) surely helps their numbers, but what they’ve done for the running game as well as stonewalling the pass rush has been historic as well as heroic.

One tool that the line used during every game and to great effect was the combination block. This block starts with two offensive linemen converging on a defender, and then one of those lineman will slide off to attack a defender on the second level.

This permits the line to control a bigger, faster, or otherwise difficult defensive lineman while also impacting the second level - mostly the linebackers and safeties. The combo block lets the line take on two different defenders in the box with their own two players, and still double-team a defender.

In their title game victory over New England, Denver started the second quarter at their own seven-yard line, holding onto a 3-0 lead. They chose to go with a run to give themselves some room to breathe, as teams often do when facing a first down inside their own 10, and the blocking on that play would be used repeatedly during this game.

This time, center Manny Ramirez and left guard Zane Beadles put on a combo block clinic to free up Knowshon Moreno for a key 11-yard gain.

At the snap, Denver is in a two tight end formation, with both TEs (Virgil Green and Julius Thomas) in three-point stances on the right side of the line of scrimmage.

New England has its defensive tackles lined up directly over the Broncos guards, which is often referred to as having the guards ‘covered’. It tells you that the tackles are in a two-gap approach and could each go either left or right. 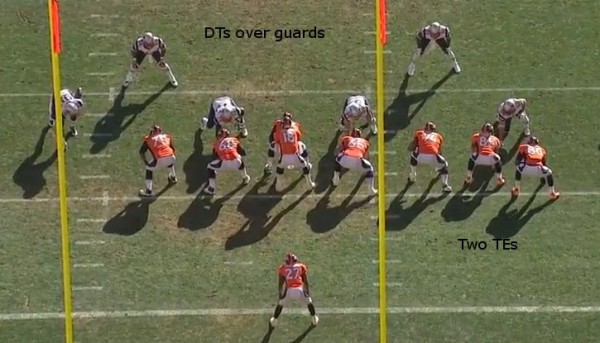 At the snap, Ramirez and Beadles converge on defensive tackle Joe Vellano (72). You can see that they’re both hitting Vellano’s torso, with Beadles taking the '7' and Manny the '2' on the defender's chest, and that they’ve turned him to face the inside (toward the center’s position). Under modern regulations, both linemen have to hit the defender between the waist and the upper shoulders when they’re both engaged on the block. If one of them slides off his block and makes contact below the waist, it’s a penalty, so proper execution is essential.

Other keys are that Chris Clark has his assignment, Chandler Jones (95), covered on the left, and that Dont’a Hightower (54) is on the second level, moving toward Moreno.

If you look carefully below, Hightower is making a key mistake here. His shoulders are parallel to the line, as they should be, but he’s prematurely crossing over with his right foot, which commits him to pressing toward the inside of the line. He should be reading Moreno’s shoulders and shuffling quickly, moving parallel to the LOS but not crossing his feet, which commits him to defending the inside. It will take him one or two extra steps to change direction if Moreno drives to the outside and to regain his momentum, which is just enough for the runner to get past him. 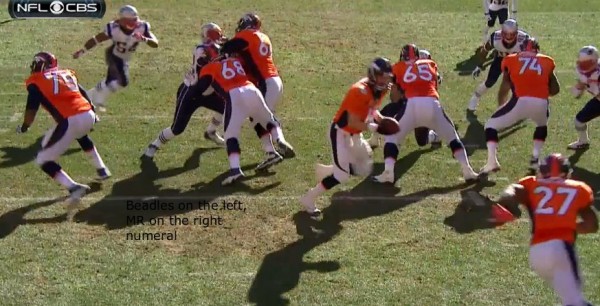 As Knowshon sees the lane developing, Manny Ramirez can ‘feel’ Zane Beadles gaining full control of Vellano. This is one of the areas of communication - often unspoken - that’s so important to playing the line. That’s Manny’s cue to slide out of the block and move onto the second level, taking on Hightower. 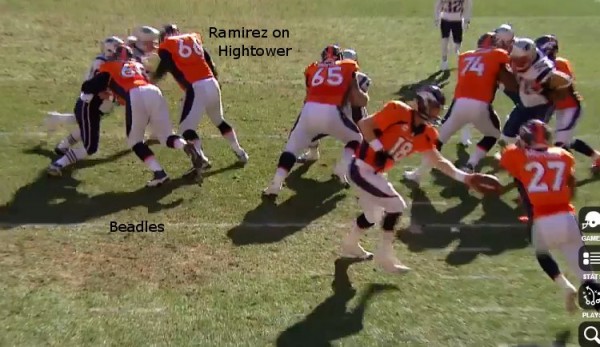 At this point, Moreno still has his choice of open gaps but he chooses the biggest, between Beadles and Clark. Manny has pushed Hightower out to near the center’s line, and yet when you look below, Manny is running back toward the ball, looking to see if he can find another target. Beadles still has a lock on Vellano, who won’t get free soon enough to affect the play (second image below has the best view). 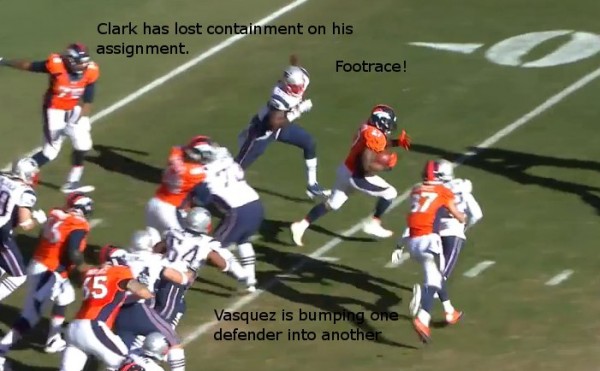 I took the second angle, below, so that you can see how much room Moreno really has. The Patriots eventually run him down from behind - Jones disengages from Clark and helps Devin McCourty catch Knowshon, but not before he's racked up 11 yards, a first down, and created a little breathing room for the offense, now out to the 18-yard line.

The line has used combo blocks frequently in their marches down the field all year, a fact that has contributed to Knowshon’s first career thousand-yard rushing season. Along with drive, zone, down, cut, and fold blocks, this technique is one of the essentials for any lineman.

You can see why Denver has been able to handle some of the big defensive tackles this year: they attack one with two linemen and then let one lineman release to block again, downfield. They’ll be doing that against Seattle. As you can see through these images, Louis Vasquez has been fine blocking one-on-one when they need that - he’s been amazing all year.

The efficiency with which the Broncos run this play is one of the reasons I like Denver’s chances against the Seahawks. The Seattle defense is very good, but they’re going up against the top line in the league, at least according to PFF (not to mention the most prolific offense in league history). Plays and execution like this will have to be common for the Broncos to bring home the Lombardi Trophy, but the truth is that it has been common, all year long.

The frequency with which they’ve achieved running plays like this one opens the door for Peyton Manning’s play action passing to flourish - the defensive linemen can’t take the chance that it’s a run, and that pause as they determine that fact costs them 0.5 to 1 second, which is all the opening that Manning needs to gain healthy chunks of yardage.

If the Broncos can establish the run as well as they did against the Patriots, their chances of winning are very good. I’m looking forward to watching how they’ll attack the Seattle defensive line. It should be a heck of a contest.