A Second Helping of Danny Trevathan against the Chargers

Second-year Denver linebacker Danny Trevathan is hoping to continue and increase his repetitions with starter Wesley Woodyard on nickel downs. Trevathan took some snaps last season with the radio helmet when Woodyard was injured, but his normal role is to match with Woodyard (who usually wears the radio) in the nickel/base formation.

If Woodyard is injured, Trevathan will be likely to step into Woodyard’s roles, with one of the other linebackers stepping into Trevathan’s.

Trevathan’s work showed up in the pivotal Week 6 game in San Diego last year, where the Broncos snoozed through the first half, handing over a couple of fumbles and spotting the Bolts a 24-point lead. Yet San Diego found they’d awakened a sleeping giant when the gun sounded for the second half.

Even early in the game, some players were up to their tasks. One of them was Trevathan.

As the play starts, it’s 2nd and 11, with two minutes to go in the first period and the Chargers driving at the Denver 29-yard line.

Trevathan is in a stacked position (directly behind defensive tackle Mitch Unrein (96)), while Von Miller is outside of Unrein, on Mitch’s left.

Defensive coordinator Jack Del Rio often uses stacking because it lets the linebacker see well and to take the gap to either side as the play unfolds. This time, there isn’t any doubt as to which route Trevathan will take, because it's a preset defensive play. 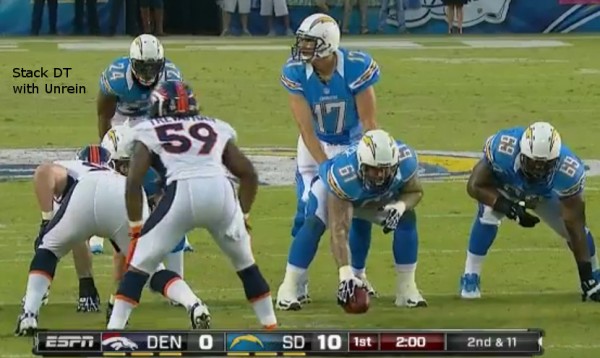 Former longtime Chargers head coach Norv Turner likes to run draws and screens on such down and distances as 2nd and 11, figuring that he’s always got an additional play to make up yardage if the attempt fizzles - he’s never been shy about taking chances.

He had just run a screen pass, though, so he decided to go with a draw play. It wouldn’t have mattered which one he picked - Trevathan was in the backfield almost as quickly as the football.

This was the ‘96 Power Play’ that the Broncos have run for years, and it was run to perfection.

Le’Ron McClain (33) is on the wing at fullback, and Von Miller is his primary assignment. Jeromey Clary is at right tackle and he fires out toward the second level, at Wesley Woodyard. The right guard will have to take on Mitch Unrein. 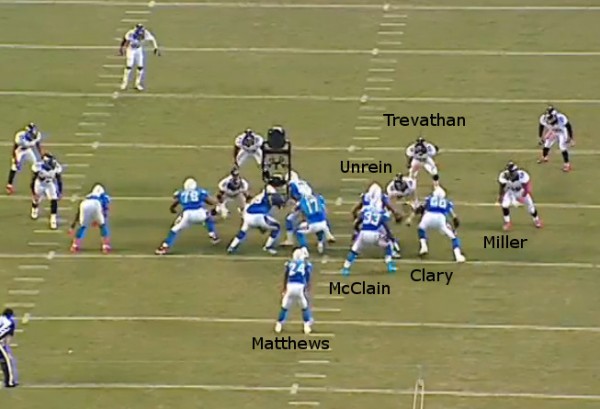 The right tackle fires out to the second level and engages Wesley Woodyard.

Mitch Unrein squeezes his guard into the A gap, obstructing it, and they spill over into the B gap where Clary and Woodyard are also creating ‘trash’.

RB Ryan Mathews has plenty of time to see it and adjusts his route. These factors have ensured that the run will go outside, just as Denver planned - right into Trevathan’s arms. 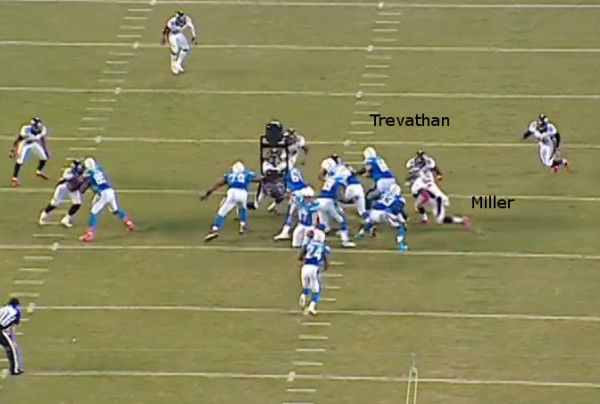 Above, Trevathan is on the move just behind Miller, coming forward as soon as the snap occurs.

Miller is driving to his right along the LOS; Clary is attacking Woodyard in the second level.

You can see that the San Diego line is blocking on angles with most of them toward the strongside, but Denver leaves them no option other than a weakside run outside the tight end.

Trevathan is slashing across the outside edge of the scrum, just past Miller’s hip, and charges into the backfield where he takes out Mathews before the back even gets started. It’s fast, simple, and highly effective. 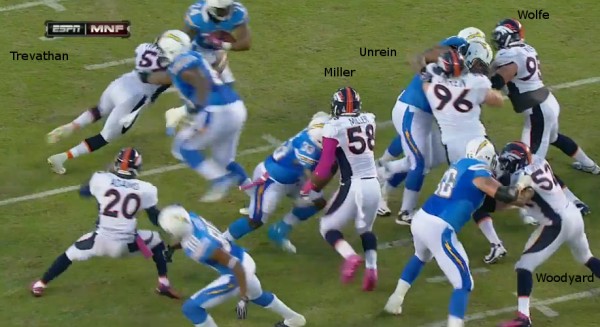 Consider the above image, taken right at the time of the tackle. It wasn’t very long ago that Denver fans were desperate for starters, much less quality depth.

This is just one play, but Woodyard, Miller, Rahim Moore (out of the scene), Unrein, Derek Wolfe, and Trevathan, among others, are all stepping up.

When you look at the image, Denver has six players visible, and five have three or fewer years in the league. It's been a fast 2.5 years, but the next generation is already having its effect. The defense has changed vastly, and for the better.

It’s a good development to see. Miller is a unique talent, while Woodyard has matured into a really fine, technically sound linebacker.

Unrein developed noticeably last year, Wolfe is said to have gotten even bigger this offseason, and Trevathan should continue to grow and improve.

The young depth in Denver’s defense is impressive, and Trevathan is a nice piece in that puzzle.