By now, you know the hideously grotesque details.

The 2012 Denver Broncos--who had effectively ruptured the spleen of their opponents on eleven straight occasions--were 41 seconds away from hosting its first AFC Championship since 2005.

Their opponents, the Baltimore Ravens--a team featuring more centenarians than the Sardinian Blue Zone--were coming off just six days of rest; they'd just played through almost four quarters of penis-shriveling cold at an altitude of five thousand, two hundred, and eighty feet; they stupidly had no timeouts; the noise of the Denver crowd was so loud it was rumored to have shattered the eardrums of the rotund (meaning a lot of inner-ear fat) Peter King.

The Ravens were desperate--so desperate, in fact, they decided to dispense with the idea of gaining twenty or thirty yards, spiking the ball, and then going for a last-ditch Hail Mary.  Instead, they threw deliberation to the Mile High wind and went mental a play early.  Joe Flacco, the quarterback who had claimed before the season to being elite, went loco and heaved the ball deep down the field--to the short side of the field, no less.

It was a crazy decision, of course, since the Broncos defenders--whoever they happened to be, and it could have been anyone with a pulse--had a lot less ground to cover to easily pluck the pass out of the icy, dead air.

A few seconds later, Jacoby Jones caught the touchdown that will likely be the highlight of his career--perhaps Rahim Moore's too.  The rest, as they say, is la historia.  You know how it ends: do not pass GO, do not collect Super Bowl rings, go to jail hunting.

There's just no way around it.  The touchdown to Jones was mind-numbing--no, more like scrotum-exploding.  At least the mind eventually warms. Not so with a kick to the scrotum.  Things sting. They sting for a long time. They might sting so long, in fact, that reproduction takes a backseat to mere survival and a lifetime supply of ice.

First, let's get something completely clear: there's really no use in beating on Rahim Moore at this point.  It's not that he doesn't deserve it, of course.  It's simply that he now trains with MMA fighters.  Trashing him is a quick way to get yourself--wait for it--A KICK TO THE BALLS.  Or you'll at least get arm barred for your trouble.

I've been asked several questions since that game.  What package and defense were the Broncos playing with 41 seconds to go?  Was Rahim Moore completely responsible?  Was there anything different Jack Del Rio could have done?

The answers to these questions are surprisingly easy.  First, it's probably not going to shock you to find out that Del Rio ran the most elementary of prevent defenses--something you could, right now, find in a hundred different high school playbooks.  It put eight defenders in coverage and essentially blanketed all zones on the field: 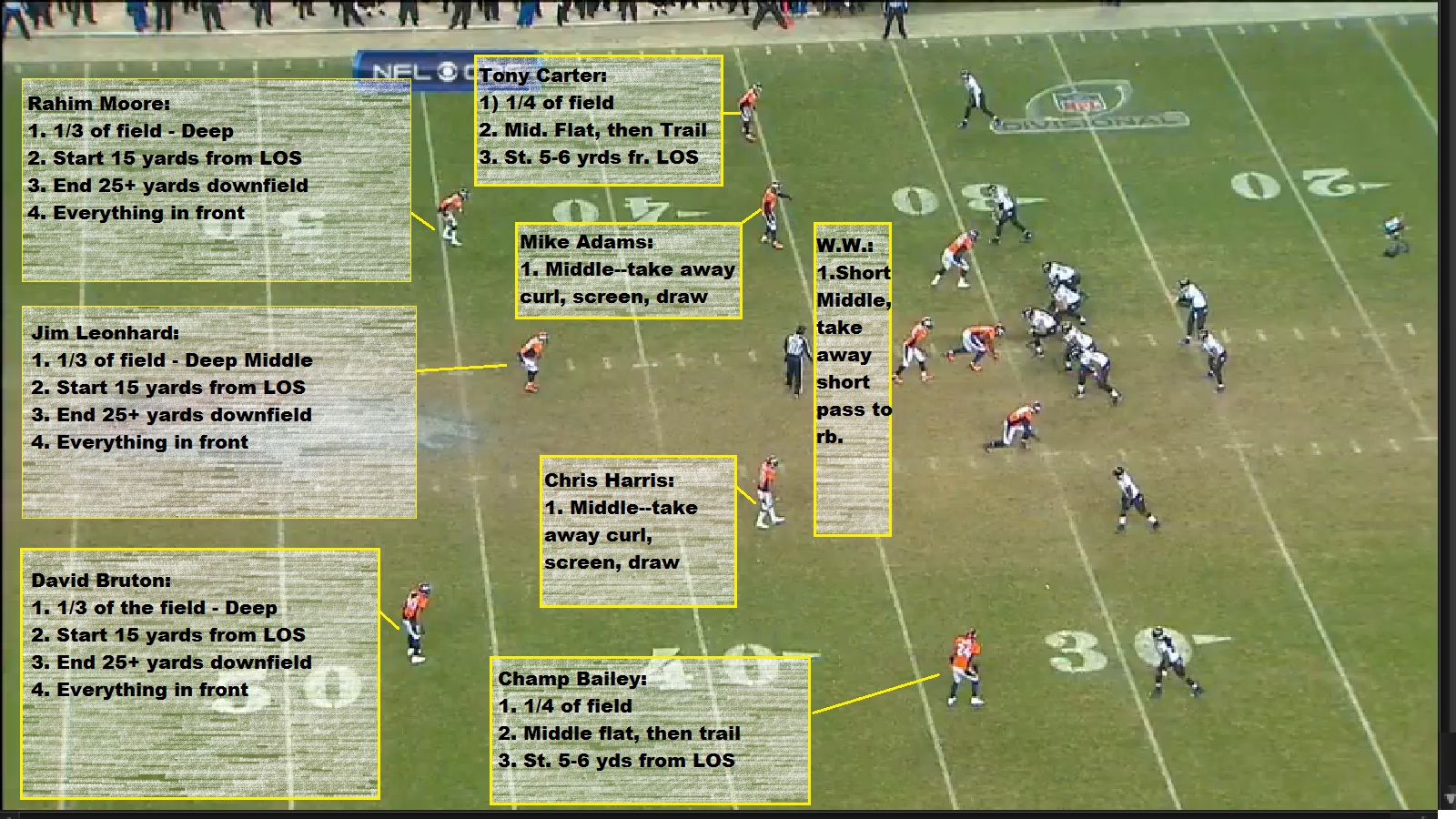 The corners are there to take away the middle flat and trail the wide receivers for any routes to the sideline.  Both Chris Harris and Mike Adams are there to clean up any curl, crossing, screens and draws.

Finally, Wesley Woodyard (abbreviated as W.W. on the frame) is there to provide minimal run support, but mostly to take anyone coming out of the backfield into the short middle zone.

Sometimes, especially in high school and college, instead of dropping eight defenders, you'll see seven defenders (the middle linebacker will essentially take the zone occupied by Chris Harris) and four rushers.  Here, however, Del Rio is playing extra cautiously and running just three.  Nothing wrong with that when the other team has to go 70 yards in 41 seconds with no timeouts.

Something else might stand out from this frame--specifically, that the defenders aren't perfectly symmetrical.  For example, Tony Carter is playing farther off than Champ Bailey, and Rahim Moore is playing at a more shallow depth than David Bruton.  Since this isn't Madden 13, it's not much of a shock.  On any given play, you'll see a variance of a yard or two.  As long as they are generally within the accepted positioning, things are okay.

But since we have a little hindsight bias working in our favor, let's quickly point out that Rahim Moore is at least two yards closer to the line of scrimmage than Bruton, and he clearly appears leveraged to the inside.

So is Leonhard, you may point out.  That's true, but remember, Leonhard's job actually is the inside third, so we'd expect his leverage to show this.

Bruton, in contrast to Moore, is already leveraged very much to his deep third.  I'm speculating here, but since Bruton doesn't see a lot of action, except in rare packages like this, my guess is he's completely focused on doing his job.  This is probably the one package he practices with regularity, and you'd better damn well bet that he knows exactly what his role is on this play: nothing gets past you on a vertical route.

This relates to Moore, at least it does in my view.  Dare I say he looks like he's expecting something over the middle?  Perhaps then a spike?  Perhaps then a final Hail Mary?  I'm certainly not defending Moore here, but he's an every-down player.  He's got a lot of (relative) experience to draw from.  In this case, it makes reasonable sense to expect the Ravens to first try and chunk off about fifteen to twenty yards in the middle of the field, then take a much longer shot downfield.

This is exactly what they had tried on the previous two downs, when Flacco had tried to connect with Dennis Pitta.  On first down, Pitta slipped; on second down, Pitta wasn't open.  So it's quite likely that Moore is expecting more of the same.  After all, who would take a shot downfield without absolutely needing to, and especially while needing three yards for a first down?

Again, this is speculation.  In most situations, Moore is probably going to pattern read rather than simply run to his zone.  Typically, a safety, when playing one-third coverage and for the first four or five steps of his drop, will read through the #2 receiver (slot or inside) first as the primary threat to their zone.

If the #2 breaks off his vertical route, then the #1 receiver (in this case, Jones) becomes the immediate threat, and the safety must haul ass to get to an angle in which he can cut off the throw.  In the case of the prevent defense, however, as Bruton seems to be demonstrating, pattern reads tend to go out the window.  The player simply spot drops to his required zone because the main idea is to keep the other team from scoring.  That's because your corners aren't playing deep, they are trailing.

From the following frame, it seems as though Moore is so concerned with this pattern read, he's ignoring his primary mission, which is to get his ass deep.  Take a look: 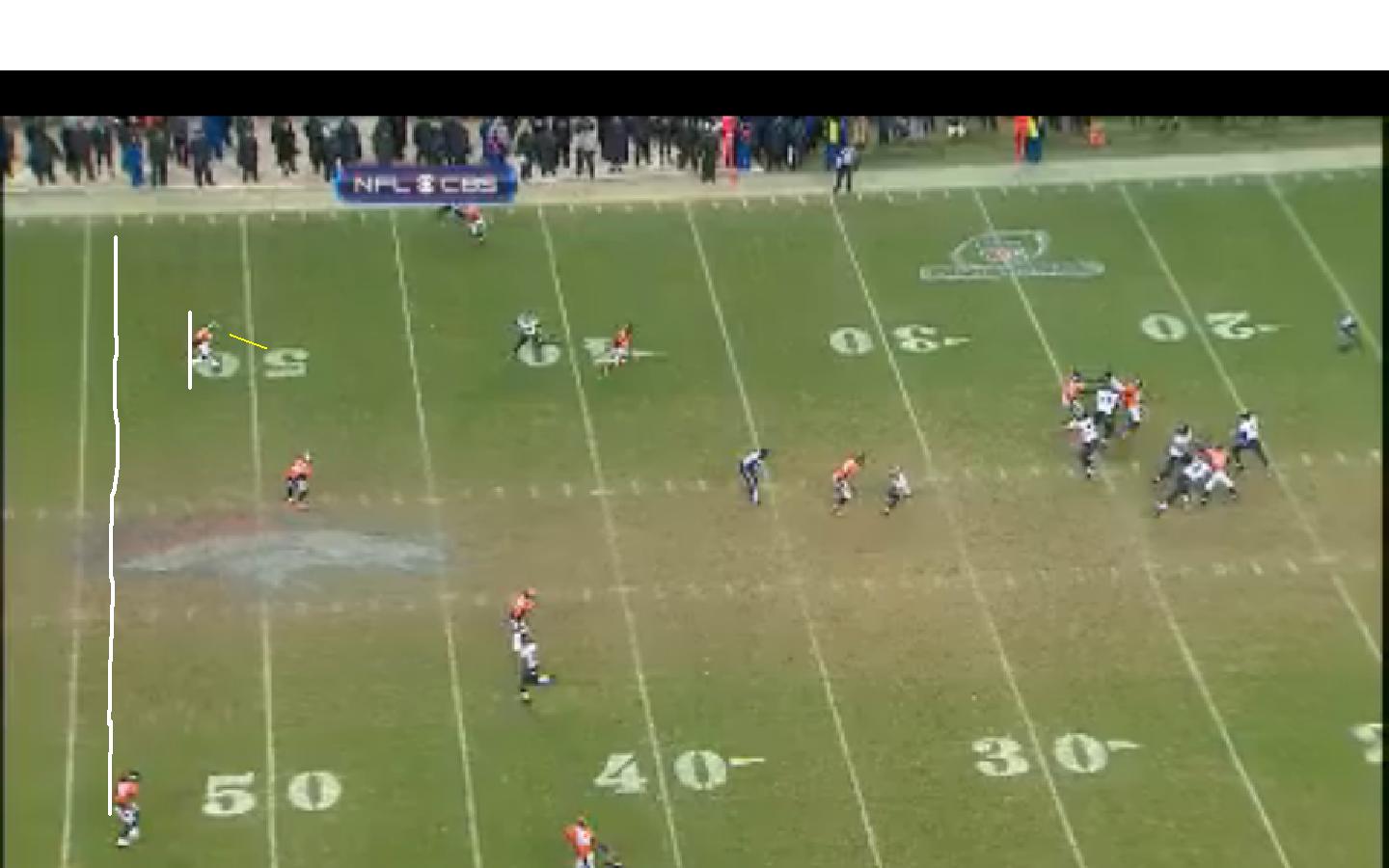 Bruton is also pattern reading to an extent (they are wired to do so, and it generally works), but notice that more than anything, he's still leveraged to his deep third--much more than Moore is. You can almost imagine what's going through his mind: David, whatever you do, don't give up the deep ball.

Moore, on the other hand, seems to be thinking: I've got to make a play.

A few moments later, trouble begins brewing, as Flacco is about to uncork the pass deep.  Moore's primary pattern read breaks his route while he's still got his hips going in the wrong 45-degree angle: 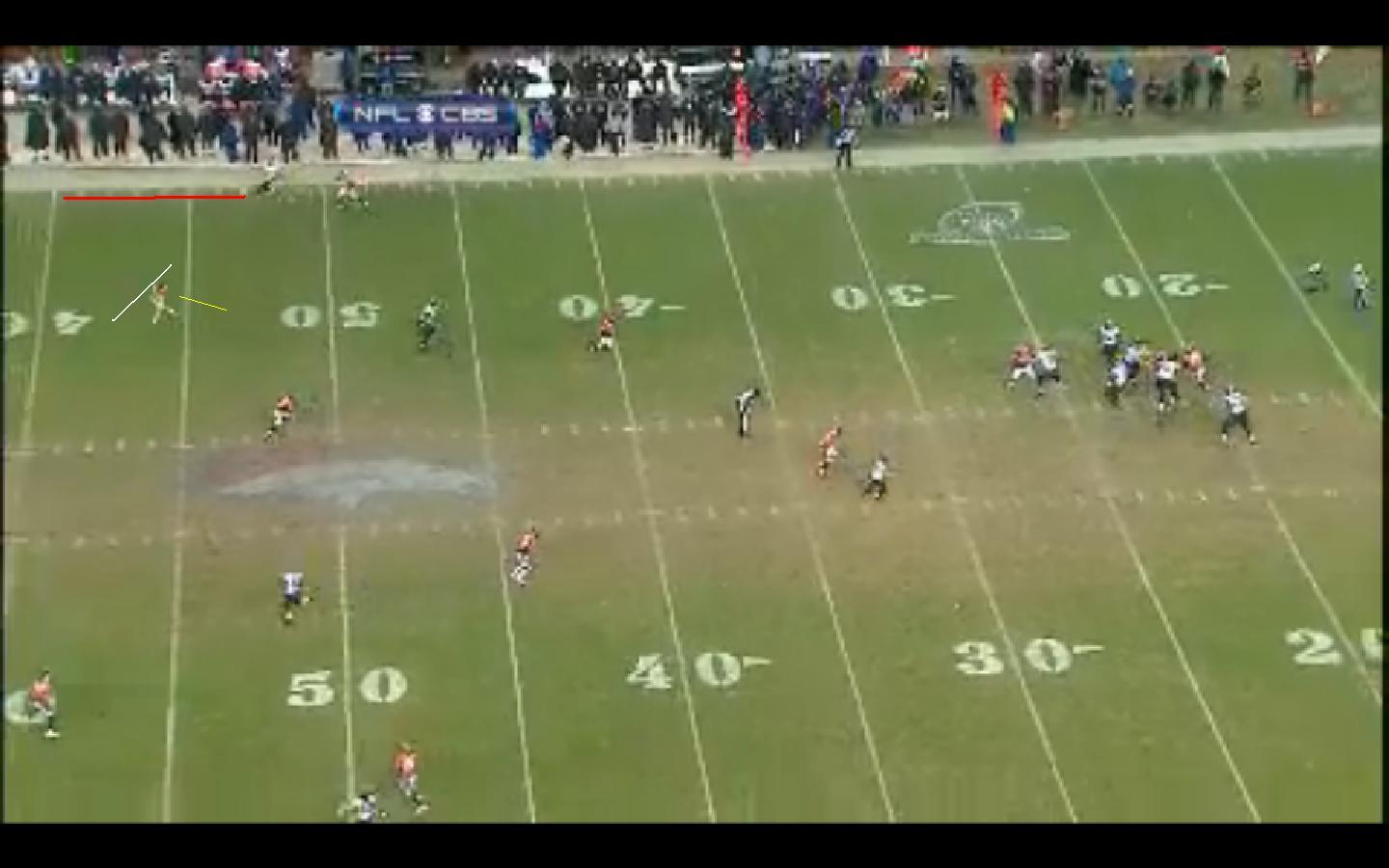 From this point things get progressively worse.  Flacco launches, while Moore quickly swivels his hips (something he has always generally been good at doing) and begins retreating in the general direction of the pass.  Yet by this time, he is so leveraged to the inside, he's simply not deep enough to take the proper angle, as Bruton would have been.

So yes, Moore misjudged the ball.  And yes, Moore mistimed his jump, but the mistake started well before either of those two actions occurred.  The real error was Moore's insistence on leveraging himself too far to the inside as though a twenty-yard gain was as important as the deep wideout. It's understandable, given the rational belief the Ravens would try and chunk off the yardage like most teams in the NFL would do, and only resort to a Hail Mary when pushed to the wall with respect to time.  It's understandable, yet unforgiveable--unforgiveable because Moore's absolute responsibility, which Bruton clearly understood, was to let nobody on God's green earth behind him.

Even a meathead like Dan Dierdorf got it.  Said Dierdorf in stuttering disbelief after the play: "I mean, that's j-j-just unthinkable that a safety could misplay that to that extent."

Unthinkable, and like a kick to the scrotum, it's going to sting for a long time--at least until the Broncos make the playoffs again.