A Second Helping of the Broncos’ six sacks against the Browns

Happy Monday, friends.  Since tomorrow is Christmas, and I'll be busy celebrating the birth of the homie Jesus (or something), I've been slaving over a hot Game Rewind so I can break you off a little something for today.  In honor of the Broncos retaking the NFL lead in team sacks, I decided to look at each one of their six from yesterday, to see what we can glean from them.

Interestingly, all six sacks occurred in the second half, and in general, there's a reason for that.  When teams get down multiple scores in the second halves of games, they tend to forget about running the ball.  That allows the defense to simply play the pass, and guys who would normally read run-to-pass are able to focus on either coverage or blitzing.  Tactically, the stuff the Broncos did Sunday isn't seen too much outside of third-and-long, when the Broncos don't have a big lead.  Let's look at those tactics to gain understanding of how each sack worked.

After the jump, we'll get screenshot-happy.  Ready.... BEGIN!!

This is basic Cover 2 Man Under, and of he six sacks, is the least schemed.  Von Miller simply blows by Browns RT Mitchell Schwartz (who has had a good rookie year), and is on Brandon Weeden with a quickness.  He ends up getting Weeden's ankle, and after beating both "All-Pro" LT Joe Thomas (73) and a chip block from RB Chris Ogbonnaya (25), Elvis Dumervil helps to bring Weeden down. 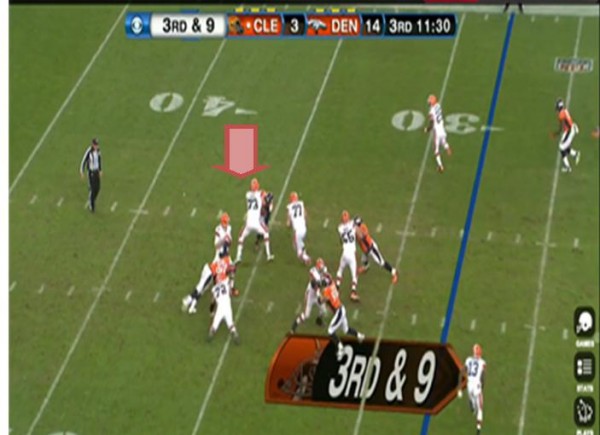 The score is still 14-3 here, and it's early in the third quarter, so the Broncos LBs are still playing run-to-pass to some degree, even on 3rd-and-9.  The coverage downfield is excellent, and Weeden has nowhere to go, even if the heat isn't on him so quickly.

Here, you have a favorite call of the Broncos, which is Man-free (meaning there's one single-high safety, with man coverage underneath), and with a double blitz through the B and C gaps on the short side of the field.  The Browns are in a 2-by-2 alignment, with a stacked release to the offense's left, as the flanker comes in motion behind the split end.  The Broncos DBs are trading off, most likely keying on inside and outside receivers, and the guy standing back at the 27 (I can't tell who it is, because All-22 isn't out till Wednesday) is ensuring that he can't be easily rubbed. 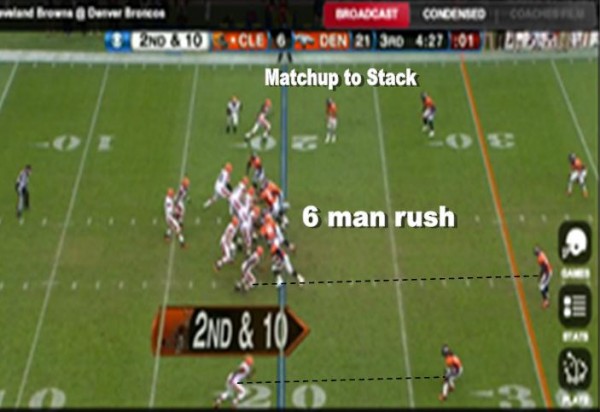 The Browns see the blitz to the short side, and it looks like they've slid their protection there.  Sliding the protection away from Von Miller is a dicey proposition, of course, and this time, he's the sixth guy coming against what seems to fundamentally be a five-man protection, unless there's a major screwup.  I have to believe that Trent Richardson, who is on the left, is meant to check-release.  I say that, because Joe Thomas took the outside man to the left, and every other lineman took the next guy to the right.

Since Miller is all the way to the right, he's unaccounted for by the offensive line.  To my way of thinking, that should never happen, but it did here.  Richardson tried to get all the way over from the QB's left to block Miller, but there was no way he could get there. 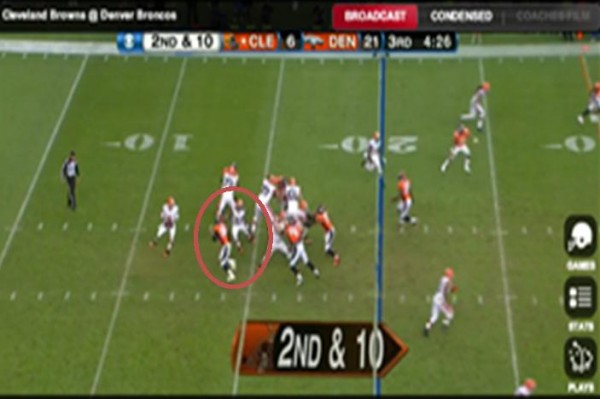 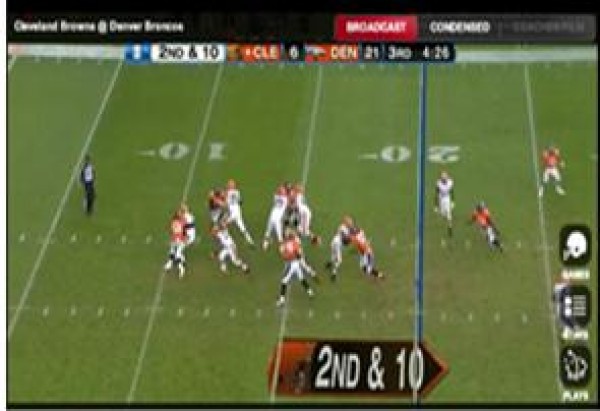 As you can see in this blurry picture (keep working on the streaming video quality, NFL), Miller eats up Weeden before he can do anything.  Again, the coverage downfield is excellent, and again, the Broncos rushers stay in their lanes, and don't allow an escape route against the quick outside rush.

In this case, Jack Del Rio schemes up a free runner by sending six rushers against five linemen.  I'm sure he was hoping it would be Miller, but if the Browns had slid their protection right, and had Richardson fill on the left, Weeden may have had a chance to stay upright.

Here, the Broncos are running the same kind of Man-free double-blitz off the short side, as on the second sack, but they're delaying the blitz slightly. 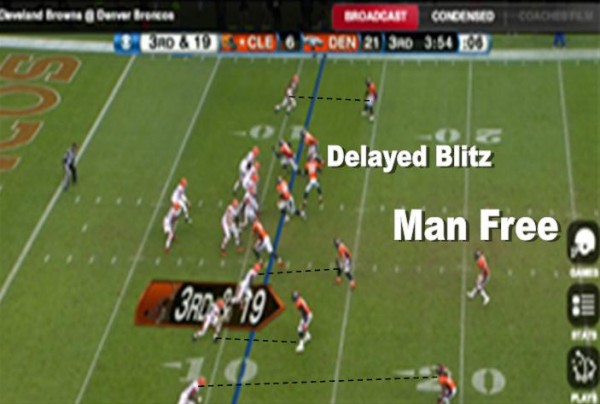 Here, only five men come, and one guy bails out to be an extra coverage player.  The offense's left side is overloaded with the blitz. 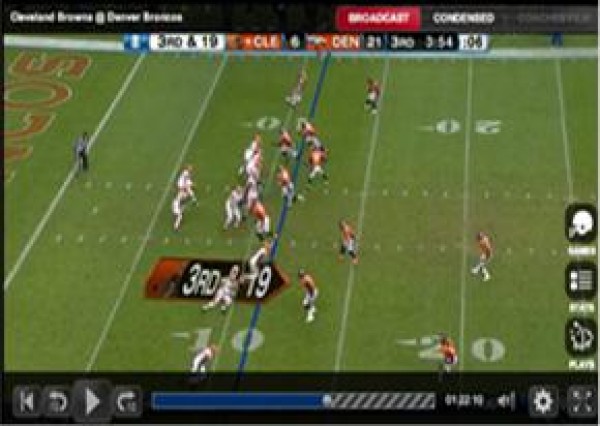 Both edges get overtaken quickly, and it forces Weeden to step up into the pocket. 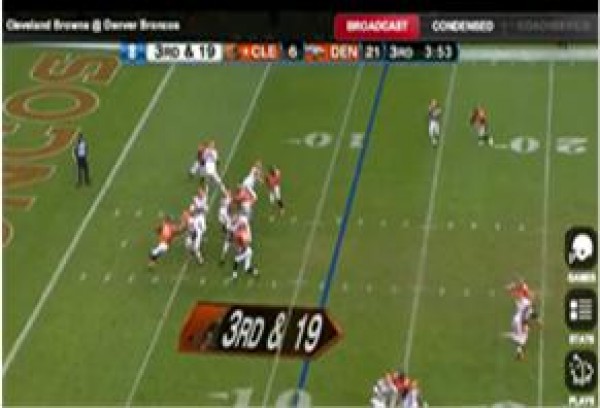 Derek Wolfe, who has been staying in his lane throughout the game, and is almost certainly assigned to do just that on most downs, disengages from his block, and sacks Weeden. 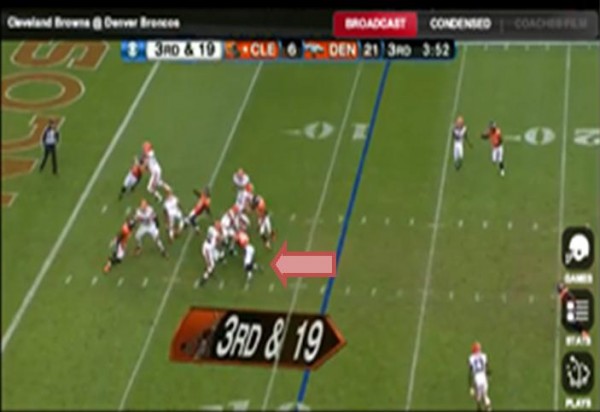 This is why teams prioritize pressure from the edge, because it forces QBs to step up into trouble.  Of course, your inside rushers have to do their part, and actually represent "trouble," and here, Wolfe does.  By the way, Wolfe is tied for 11th in the NFL in sacks among inside rushers, if you're into the whole "measuring rushers by sacks thing."


Not a bad rookie year, particularly when you consider how effective Wolfe has been against the run throughout the season, while playing a huge number of snaps.  Cox and Reyes are the other rookies in that list, and Reyes got 3.5 of his 5.5 sacks Sunday, against the LOLJets and their third-string QB.

So, I miscounted when I made this screenshot, and I don't feel like re-doing it.  The Broncos have seven men at the line, and a safety splitting the difference.  They're showing a heavy blitz on 4th and 10, with the DBs all looking like they'll be playing off-man coverage.

At the snap, we see that it's our friend Man-free, with Rahim Moore aligned to the 3-by-1 side of the offense: 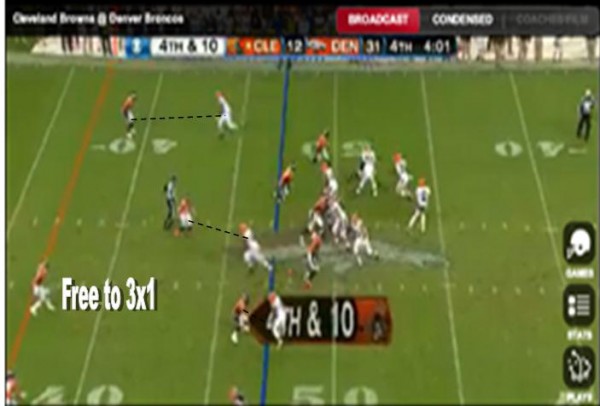 The five-man rush is joined by two blitzers from (stop me if you've heard this one) the short side of the field.  Elvis Dumervil, who usually plays on the offense's left side, is on their right, matched up with Mitchell Schwartz.  He dominates the rookie, on his way to clobbering Colt McCoy, and forcing a turnover on downs. 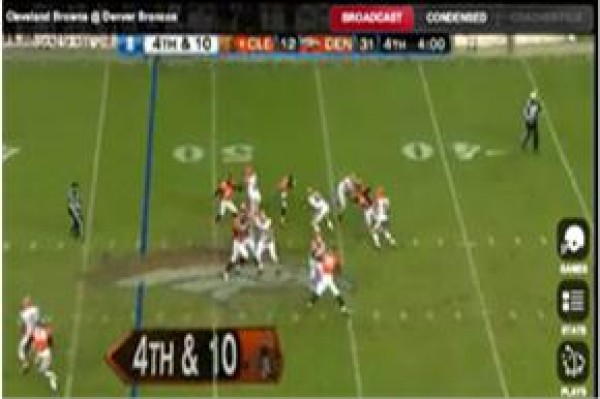 This time the Broncos show a 2-deep shell, and more man-to-man. 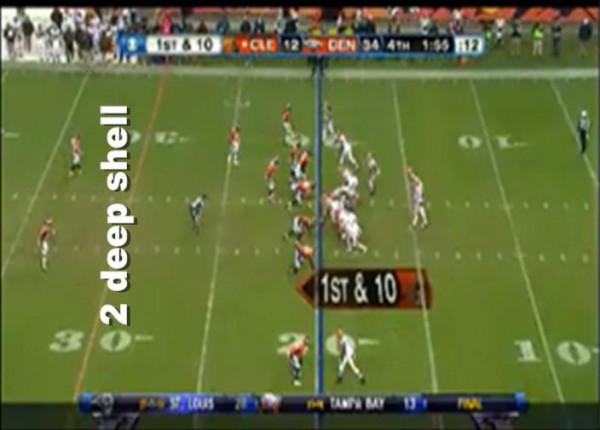 Dumervil is going to pwn the overrated Joe Thomas, and Wesley Woodyard, coming on an inside blitz, is going to meet him at the QB.  The Browns' protection seemed not to account for Woodyard, and Thomas seemed not to be able to block Dumervil.  Not a good start for 1st and 10, even if it is garbage time. 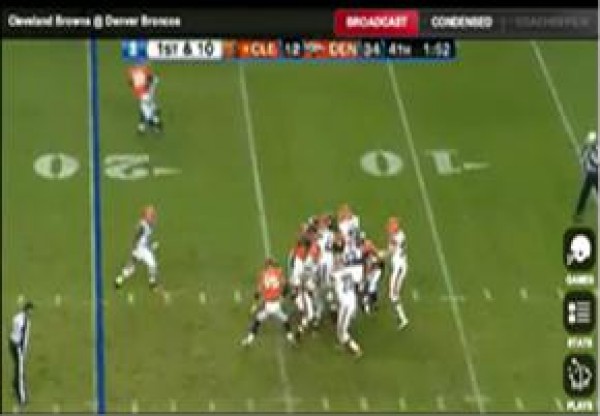 On 4th and 13, the Broncos show Man-free again, with six rushers.  Three are down, and three are standing up.  This is going to be the same short-side double blitz that the Browns haven't been able to get blocked, no matter what they try.  Note that both Broncos DEs are in a Wide-9 alignment.  That is going to force the OTs to either let them go untouched, or to try to get out to meet them on their extreme rush angle. 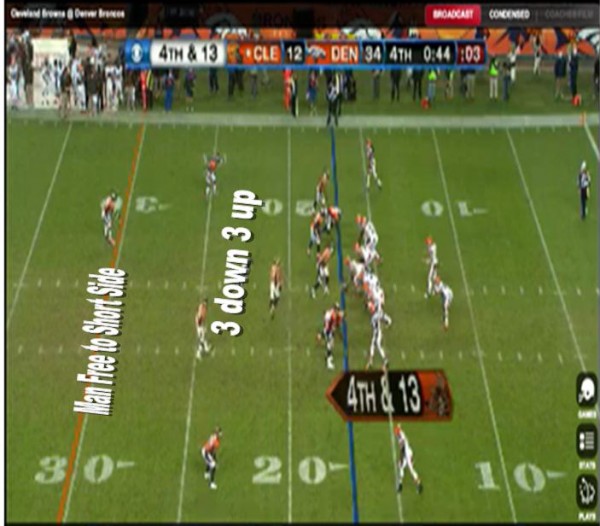 Well, Schwartz is going to head out to meet the DE, who I think is Robert Ayers.  That's going to leave Woodyard unblocked, with a clear shot on McCoy. 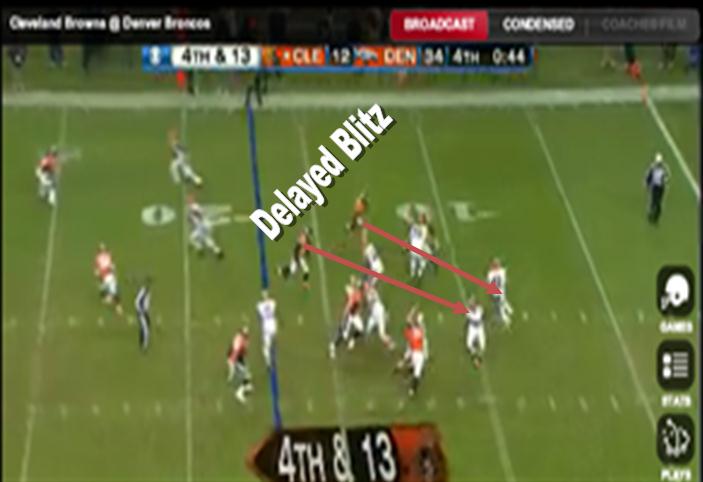 Wes hits McCoy like a ton of bricks, setting up Brock Osweiler for one final kneeldown. 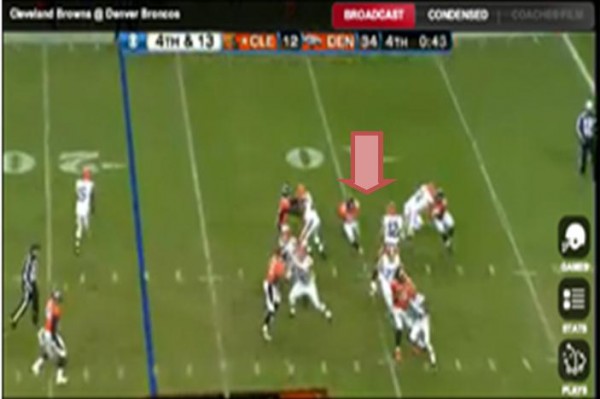 The Broncos can really heat up a QB, and they have a lot of ways to do it.  They can blitz, and they can get home with a four-man rush.  What's really impressive is their ability to consistently play man-to-man coverage behind whatever it is they're doing up front.  Add the pass rush as another area in which the Broncos have improved their proficiency as the season has gone on.