A rabbit’s foot and a hoodie

Rather than offer up a Kool-Aid-based opinion, in which I defend Fox as a turnaround artist and the victim of bad ownership in Carolina, I thought I'd let sheer randomness take a crack at the question.

So let's start our own NFL.  You've always wanted to do that, haven't you?  Now, instead of being born an heir to the Johnson & Johnson fortune, you can just have a team.  Yeah, I'm that nice a guy. Savor it.

The ground rules of our league are quite simple.  We don't even need to pay Roger Goodell his meager $1 salary.  The rules are as follows:

Why four seasons?  Well, that happens to be a common contract length for a new coach.  But who's counting, eh?

Should the fan base of each of these losing teams be upset?  Unless your team drafted an oft-injured running back and traded back into the first round for an average corner, probably not.  Remember, this is only the coach's first season.  He needs time to implement his system.  Perhaps the team was used to a culture of losing and it's going to take some time to turn that around.  Even better, he's got to bring in his guy at quarterback.  So the fan base cuts these coaches some slack.

How about the teams that made the playoffs?  Well, that's a different story.  The fan base for these teams are joyous.  They praise on message boards the change in the players' attitudes.  If a particular coach ran an intense training camp, the media tells us he's given the players the requisite tough love.  If he ran a light camp, we're told he's a player's coach.  Perhaps one coach is even called "Mangenius."

Depending upon the circumstance and team, phrases like "worst to first" and "turnaround artist" are applied accordingly.

Oh, yeah, and don't forget, this is random.

After our second season, another twelve of the teams make the playoffs.  Some of them could be pulled from the previous year's winners, others from the group of non-playoff teams.

A simple probability tree will help clarify how things would look:

This tree shows the first two completed seasons.  In the second season, the twelve winners from season one have the same chance of either making (37.5%) the playoffs or not (62.5%).  The same is true from our twenty losers from season one.

So after two seasons of play, 4.5 of our teams have had two winning seasons.  You can bet the fan bases of these teams are happy with their coaching choices.  The General Manager and Owner are called "wise" if they hired coaches with a lot of experience.  They are called "innovative" if they hired a hot shot coordinator with little experience.  Fans want these coaches signed to an extension as soon as possible.

Fifteen of the teams in our league have made the playoffs once.  The fan base of these teams are split.  Message boards are filled with contradictory comments.  Some of the comments call the coach lucky.  Some say his true colors will show themselves in season three. But most of all, there is a call for patience.  These coaches still need time to implement their systems, so goes the thinking.

12.5 of our teams have missed the playoffs two straight seasons.  Their fans are not happy.  The local writers for these teams are already whispering the words "hot seat."  Fans booed at the last home game.   If a coach for one of these teams ran a tough training camp, he's known as being rigid.  If he ran a light camp, perhaps he lacks the toughness needed to be a great NFL coach.

Again, I remind you, these seasons have been randomly generated.

Each team again had an equal chance of making the playoffs (37.5%) and missing the playoffs (62.5%).  Rather than show you another visual (which I've saved for season four), here are the results after year three:

The two teams (if we round up) who have enjoyed three consecutive playoff berths are now creating nicknames for their coaches.  Let's call one The Chin, since that happens to be his most prominent facial feature.  Let's call the other The Mastermind.  Why not? I'm sure (despite this being completely random), he was making some highly intelligent calls.  If the owners of these teams haven't locked up these coaches to an extension, they are frantically trying to do it.  Interestingly enough, the media begins to fill (post facto) on how these coaches have made all the right moves over their tenure.  Perhaps the coach that is known as the Mastermind plans on writing a book telling all of us about these moves.  Maybe he entitles the book Think Like a Champion.

Eight of our teams have made the postseason twice.  These coaches are not even close to the hot seat.  They are being hailed as solid coaches and their teams, we are told, are just a few players away from making another run.

Fourteen of our teams have made it to the playoffs only once in three seasons.  Their fan bases (and ownership) are getting nervous.  Are these coaches fit for their jobs?  One of these coaches, the one who was labeled the "Mangenius" after a playoff appearance in season one, is not officially on the hot seat.

A full eight of our teams have not made the playoffs even once.  Screw them.  They are terrible coaches.  Ownership should quickly figure out a way to fire their asses and line them up for the next Raiders coaching vacancy.

Did I mention this is all random?

After four seasons, we have one hell of a probability tree, but it helps to visual how things look: 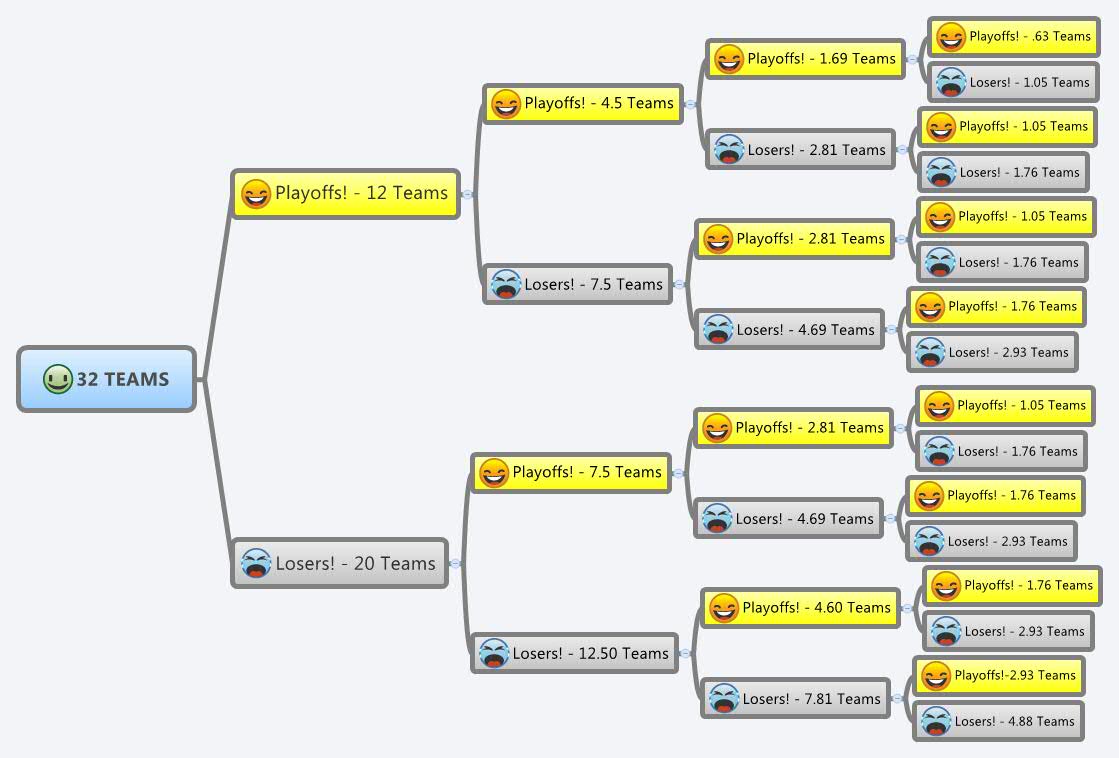 By the numbers, here is how this tree breaks down:

So after four seasons of randomness, in which teams all have the same chance of making the playoffs, only one team is left standing (if we round up) with four consecutive playoff appearances.  I think we all know what would happen at this point.  The media would take every quirk this guy had (perhaps he wears hooded sweatshirts with the arms cut off and speaks in vague statements) and turn it into gold.  Books would be written about him.  And other teams would try and copy everything they saw this man doing, despite the fact that it's totally random.  Some other teams might accuse the guy of cheating, but after four consecutive playoff appearances, the trait would be shrugged off as the guy being a hyper-competitor.

The four teams that had three winning seasons would be happy with their coaches.  Extensions would be waiting.

The teams that had two playoff seasons (10.55 of them) would be lukewarm.  Their fans might wonder, "why is this guy so hot and cold?"

The teams that had only one playoff season, which included the greatest number of teams out of the thirty-two, are unhappy and actively seeking other coaches.  Many of them have been described as soft or weak.  Perhaps there are accusations by the local beat writer that they don't toe the line with players the way that they should.

Five of our teams (rounding up) have had four consecutive non-playoff seasons.  They are currently out of a job.  Ownership doesn't care that this was all random.

The guy they called "Mangenius" was able to find work, however.  He just went from one losing team to another.

History books, autobiographies, and self-help books are written by and about the winners, often through the prism of survivor and confirmation bias.   We see that a mutual fund has beaten the market for two years running, and we assume that the manager of this fund is skilled, not lucky.   We rarely mention that previous to this, the market trounced the fund manager.  We buy a stock.  It goes up.  We assume that our skill as a stockpicker is better than the average.  Entrepreneurs who successfully IPO their company are featured on magazine covers and lauded for their appetite for risk.  The other 1,000 whose company failed (and who also had appetites for risk) never make the cover of magazines.

The same is true for sports.  Despite that sports are complex and fraught with randomness over the course of a season, we like to think that luck equals preparedness plus opportunity.  We we forget that all coaches in the NFL are prepared.

Yet someone has to win.   We can simply create the narrative and backstory later to justify the how and the why.

So is John Fox a good coach?  He might be.  You can see his track record here.

Just note that making the playoffs three times in nine years is no better or no worse than rolling dice.  So unless you've got Tom Brady or Peyton Manning lined up, Fox stands a chance of being as good as the next guy the Broncos would have picked.